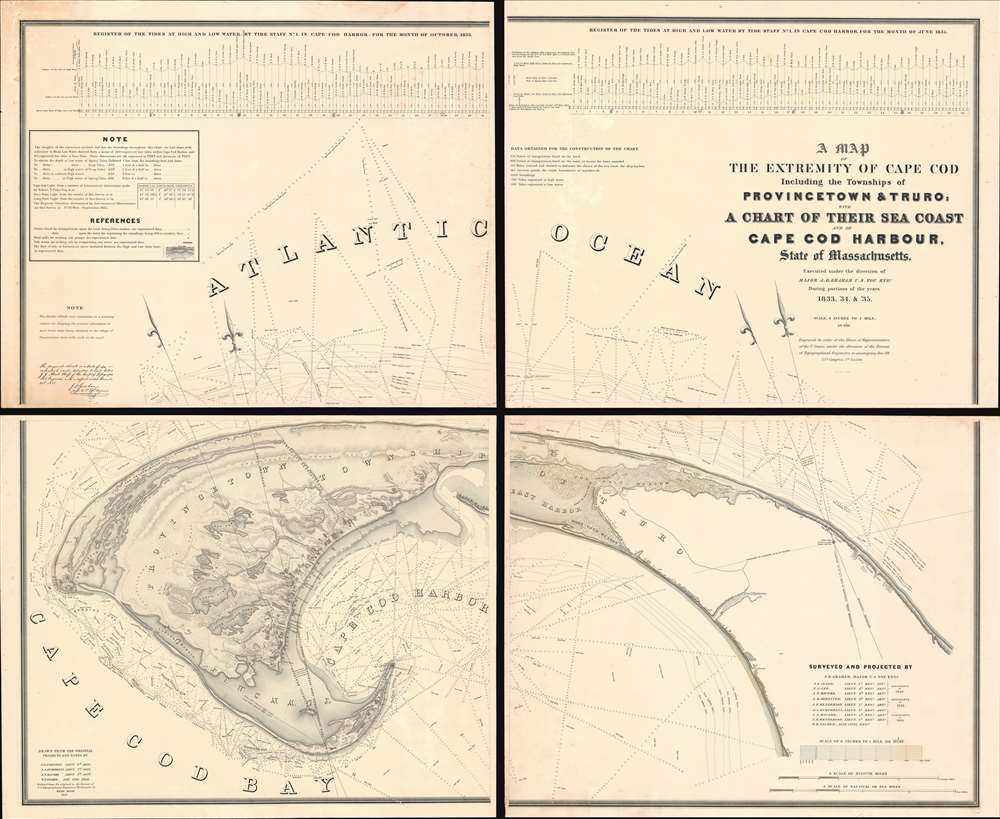 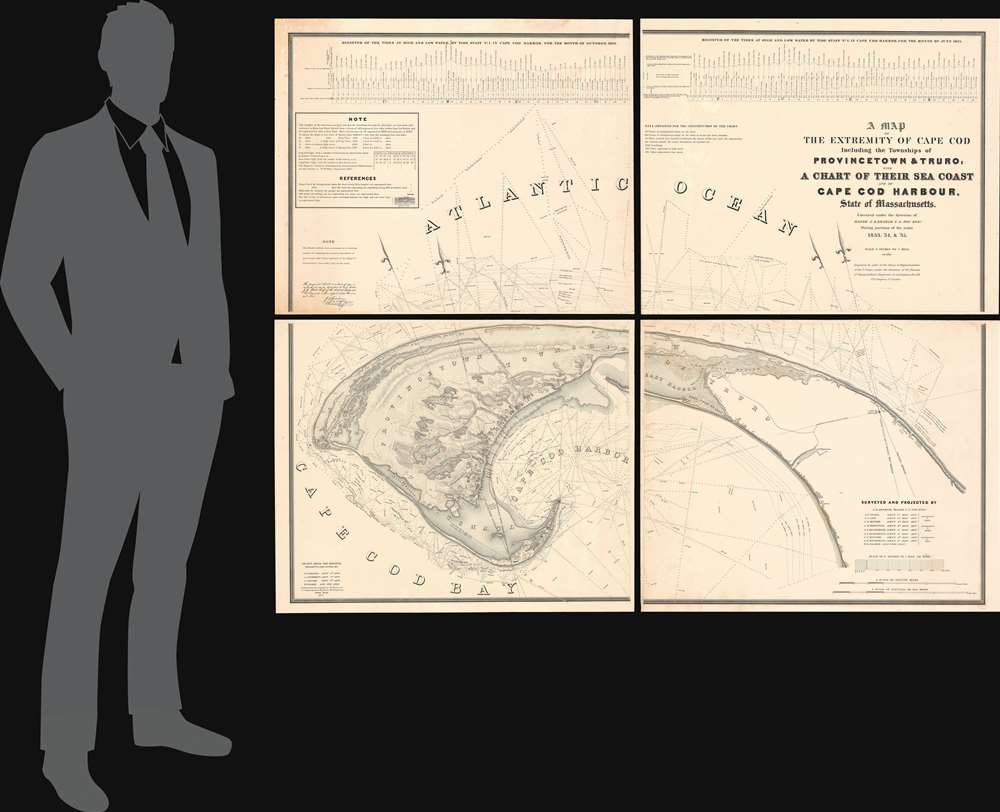 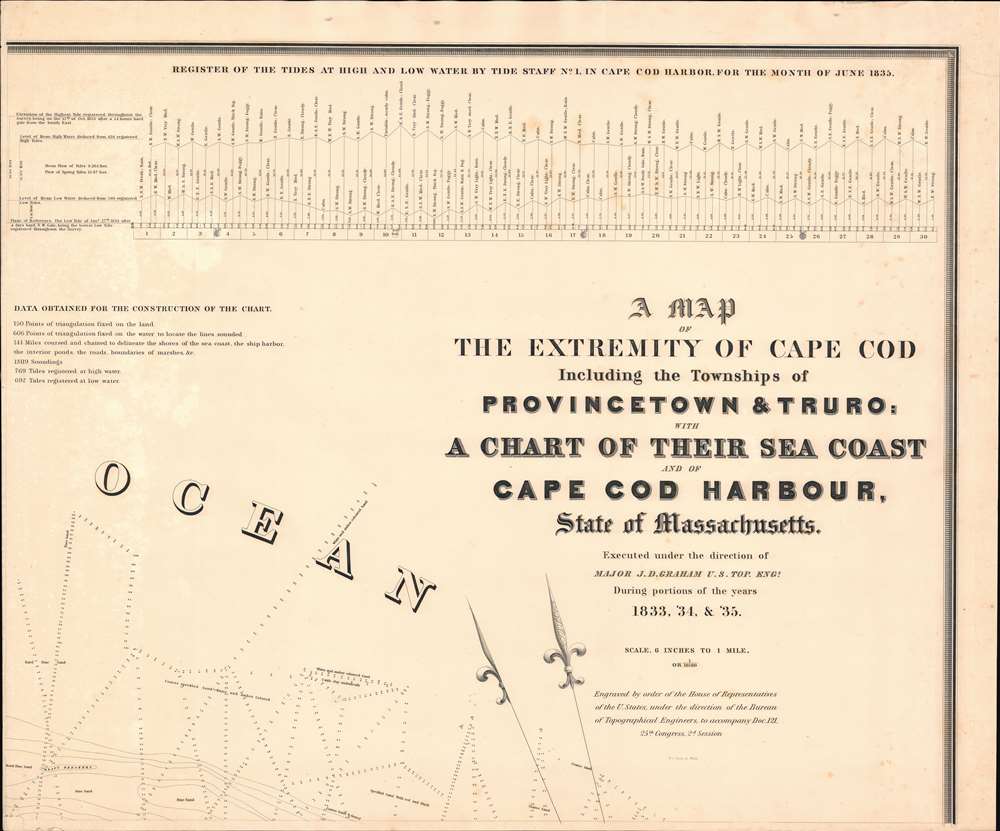 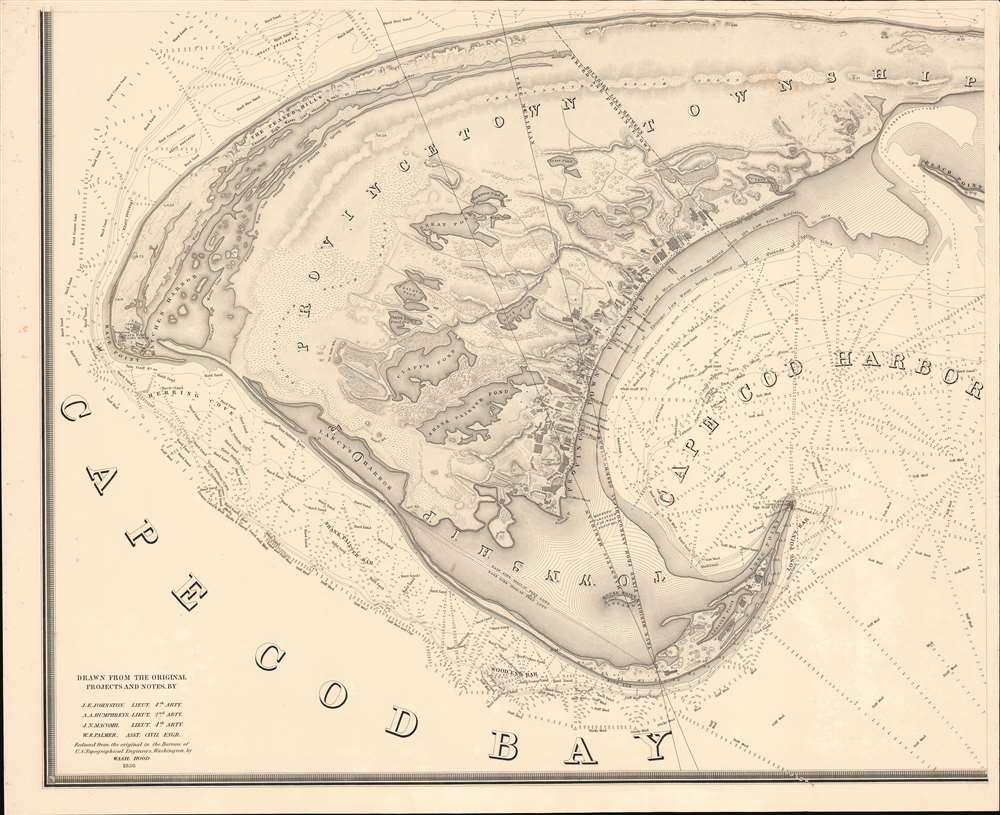 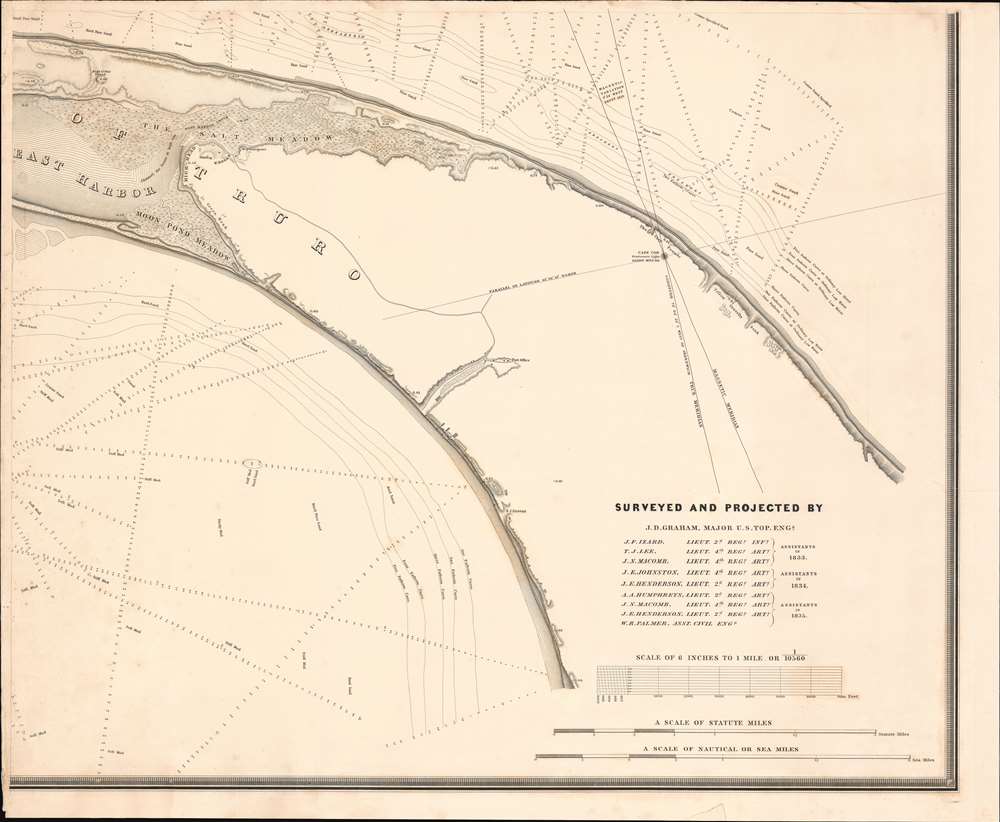 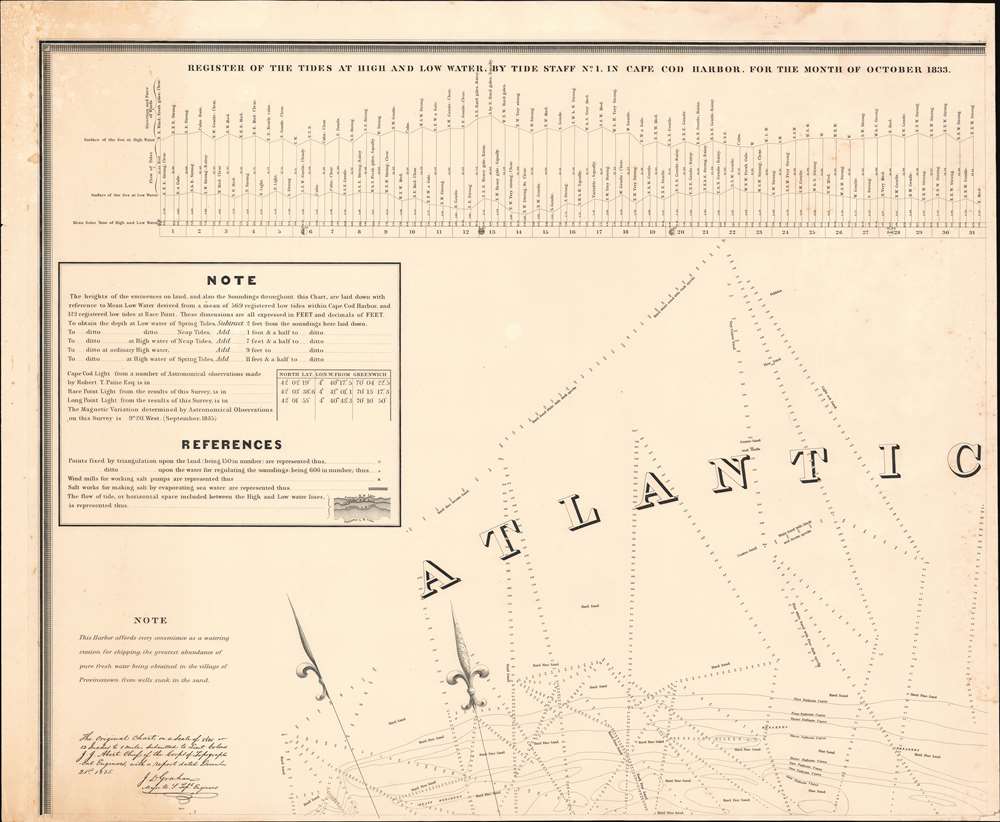 An exceptional discovery, this is James Duncan Graham's wall map of Provincetown at the tip of Cape Cod. At the time of issue, and for a long time afterwards, this was the definitive map of the Provincetown area and the surrounding waters, said to have been used by, among many others, Henry David Thoreau when writing Cape Cod. The map was produced to

aid in the projection of the works for the military defenses of the important harbor formed by the peculiar spiral termination of [Cape Cod], and also to aid our ships of war and other vessels in entering it with safety after making this prominent headland. (Congressional Report, 25th Congress, Second Session, p. 3).

This monumentally proportioned map consists of four panels which, if joined, would produce an enormous wall map covering the northern extremity of Cape Cod from roughly Truro, to Provincetown and the Long Point Light House. It was issued in 1836 based upon survey's conducted under the direction of U. S. Topographical Engineer J. D. Graham between 1833 and 1835. The detail throughout is extraordinary, with thousands of depth soundings and exceptional inland detail complete to the level of individual buildings. Relief shown by hachure and spot heights. Depths shown by isolines and soundings. Includes notes, references, and 2 diagrams of the tides at high and low water in Cape Cod Harbor for the months of Oct. 1833 and June 1835.

This map was issued by the Army Corps of Topographical Engineers for the 25th Congress, 2nd Session. It was reduced from the original manuscript by Washington Hood and engraved in Washington D.C. by William J. Stone. Many of the cartographers who produced the map under Graham's direction, including Graham himself, J. N. Macomb, J. E. Johnston, A. A. Humphreys, W. R. Palmer and J. E. Henderson, went on to become major figures in the exploration and mapping of the American West. This map exists in two states. The present is the first and rarest. In 1841 the Boston Marine Insurance Company published a one-sheet edition, which is more common. This four-sheet edition is quite scarce on the market but well represented institutionally.

James Duncan Graham (April 4, 1799 - December 28, 1865) was an American topographical engineer active with the Army Corps of Engineers in the first half of the 19th century. Graham was born in Prince William County, Virginia to a family of Scottish descent. He studied at West Point and entered the army upon graduating in 1817 as a Third Lieutenant of the Corps of Artillery. He is reported to have embodied the 'highest accomplishments of the polished gentleman and distinguished scholar.' During his long career with the Topographical Engineers, Graham participated in many of the most important events of the 19th century, ranging from the Mexican American War (1846 - 1848) and the Civil War (1861 - 1865), to surveying the Texas Boundary, producing the first scientifically accurate survey of Cape Cod, mapping the Great Lakes, and the survey of the Mason Dixon Line. Graham died in his home in Boston of sudden heart failure at 66 years of age. Learn More...


William James Stone (c. 1800 - 1865) was an English-born American engraver, lithographer, and sculptor based in Washington D.C. Stone emigrated to the United States in 1804 where he studied engraving under Peter Maverick (1780 - 1831) in New York. Stone started his firm in Washington D.C. in 1815 where he capitalized on the printing of government maps and documents. His most significant accomplishment is his 1823 facsimile of the Declaration of Independence – probably the most exact and iconic version of that document ever printed. Stone is said to have worked three years on his copy of the Declaration of Independence. Among his cartographic works are Emory's map of Texas and Graham's 1836 map of Provincetown. Stone retired from printing to pursue sculpture in the 1840s. He died in 1865. Learn More...


Washington Hood (February 2, 1808 – July 17, 1840) was American army officer in the Corps of Topographical Engineers. Hood was born in Philadelphia, Pennsylvania, the son of John McClellan Hood, a wholesale grocer. Hood attended West Point, from which he was the 500th graduate, matriculating with in the class of 1827. Between 1831 and 1846 he completed various topographical surveys in Missouri and Florida (Seminole Wars?). He next worked with Robert E. Lee measuring the Ohio-Michigan line. In 1836, Hood resigned his military commission to work as a private civil engineer. He spent much of 1837 in Cuba, where he performed railroad work. He rejoined the military as a Captain in 1838 and in that year produced his landmark map of Oregon territory. In 1839, President Van Buren sent him to survey the Oklahoma Shawnee lands between the Arkansas and Missouri River. During this assignment, he contracted an unknown illness from which he died less than a year later. A large archive of his important sketches and manuscripts are preserved at the Winterthur Library in Delaware and Beinecke Rare Book Library, at Yale. Learn More...