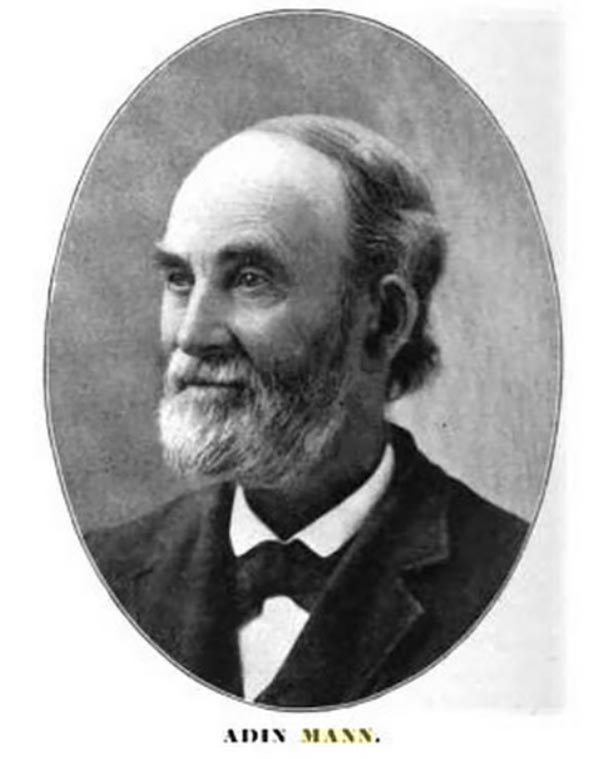 Adin Mann (October 12, 1816 - April 2, 1903) was an American civil engineer and veteran of the American Civil War. Born in Orford, New Hampshire, Mann attended Meridan College in Meridan, New Hampshire, and earned a degree in civil engineering. He moved to Illinois in 1836, where he established himself as the pioneer surveyor of Kane County. Based out of his office in Udina, Illinois, Mann surveyed lands for settlers throughout the county, and was elected County Surveyor in 1842, a position he held for the next forty years. He moved from Udina to Elgin, Illinois in 1842 and held the post of Treasurer of Kane County from 1860 to 1862. In 1862, Mann was commissioned Captain of Company B, One Hundred Twenty-Fourth Illinois Volunteer Infantry, and played a critical role in recruiting and organizing the regiment. He attained the rank of Major before being mustered out of service in 1865. Over the course of his career as a civil engineer, Mann conducted surveys in Ohio, Pennsylvania, Nebraska, and Kansas. Maps of the entire states of Nebraska and Kansas were also made from his surveys and notes. At the time of his death, Mann had been a resident of Elgin, Illinois for twenty years, but over the course of his life he had lived in Batavia, Illinois, Vicksburg, Mississippi (where he ran a lumber business after the Civil War - a position he did not hold for very long), and for a while in Kansas. Mann married Lydia Wright in 1842, with whom he had eight children. Four of his six sons served in the Union Army during the American Civil War.