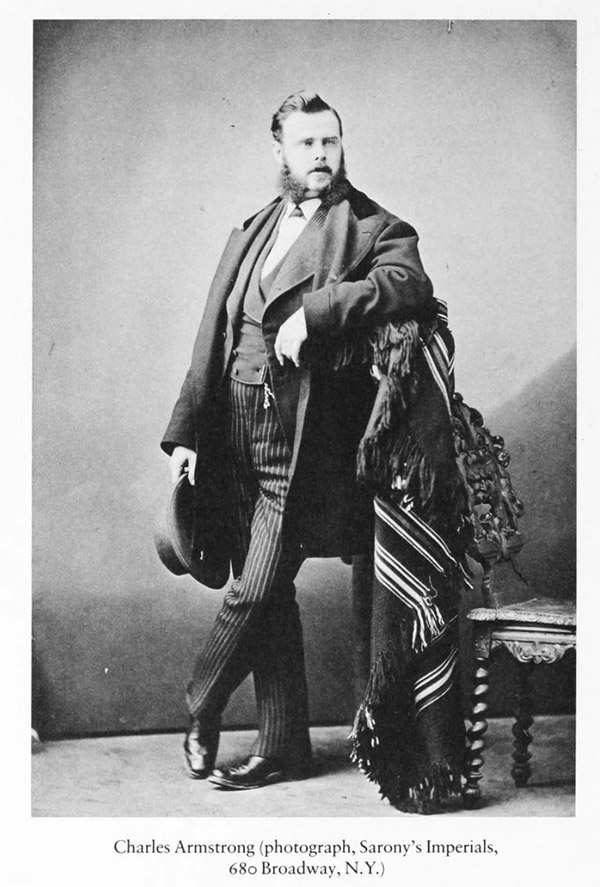 Charles Armstrong (November 23, 1836 - 1906) was a British-American artist, lithographer, chromolithographer, printer, and viewmaker active in the second half of the 19th and years of the 20th century. Armstrong was born in Bryanston Squre, London, England and mastered wood engraving under his father, Thomas Armstrong. He then studied at the Marlborough House School and completed a seven-year apprenticeship with Leighton Brothers, Printers, where he learnt lithography and copper engraving. In 1858, after completing his apprenticeship, Armstrong worked as a chromolithographic artist under Vincent Brooks. He also married and developed a passion for Yacht racing - suggesting considerable prosperity. Armstrong emigrated to New York in 1866, funding his own firm, in partnership with Herman Bencke. The partnership lasted until 1868, when Armstrong moved to New Jersey and signed a contract with the famous German-American lithographer Louis Prang (1824 - 1909). In 1871, he partnered with John E. Green and Daniel M. McLellan, establishing the firm of Armstrong, McLellan and Green. I the following year, Armstrong moved to Boston, to found Armstrong and Company, describing himself as an 'artistic lithographer.' This was an unfortunate choice, as Armstrong's first offices, on Boston's Milk Street, were almost immediately destroyed by the 1872 Great Fire of Boston. The firm reestablished itself on Congress Street in 1874, but were again ravaged by fire. Finally, he moved to Daye Court, in Cambridge, where the firm prospered until 1872, when it merged with H. O. Houghton and Company, later Houghton-Mifflin. Under H. O. Houghton, Armstrong operated a semi-independent publishing department, retaining his own imprint, and often working with partner firms working with a similar arrangement such as Riverside Press. Armstrong also worked extensively with the New York publisher Charles Scribner, printing color plates for more than thirty years, including such lavish chromolithographic productions as American Yachts (1884) and A. B. Frost’s Shooting Pictures (1896). Armstrong died in 1906 in New Hampshire.