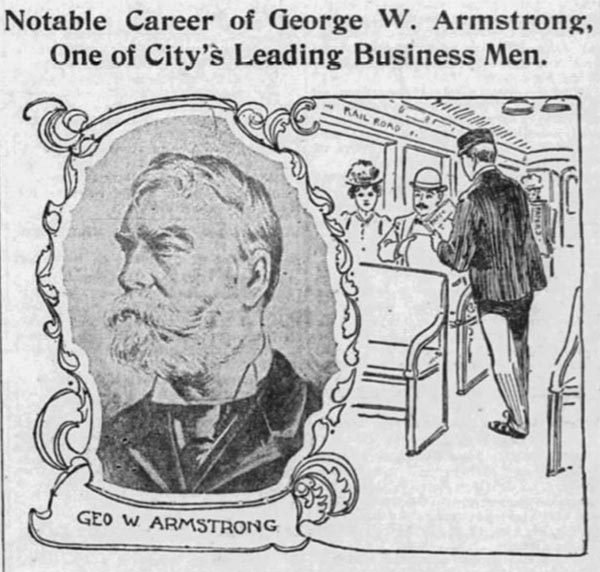 George Washington Armstrong (August 11, 1836 - June 30, 1901) was an American businessman and newspaperman active in Boston and Maine from the mid 19th to the early 20th century. Armstrong was born in Boston, Massachusetts. His family were among the first Scottish settlers in New Hampshire in the early 1700s. He was educated at the Hawes Grammer School. In 1850, when Armstrong was just 14, his father died and, receiving 83 USD from the estate, he quit school and set out on his own. He initially took work as a penny postman covers South Boston. Later he became an office boy for the South Boston Gazette and Saturday News. Two years later, in 1852, he became a newsboy on the Boston- Worcester Line, a position he held for 9 years, and which defined much of his future. In 1863, he became half-owner of the restaurant and newsroom at the Boston station of the Boston-Albany Line (previously the Boston-Worchester). By 1871, he was the sole owner, operating as the 'G. W. Armstrong Dining Room and News Co.' Achieving considerable success in the news business, he launched Armstrong's Transfer, a goods and baggage transport service that utilized the trolleys and railroads. He expanded his newsroom business by acquiring all news and restaurant services entire Boston-Albany line, the Hoosac Tunnel Line, and the Eastern Railroad. He later diversified his holdings into bank and railroad stock. As part of his news business, Armstrong published a number of booklets, pamphlets, and maps for sale along the most popular routes he serviced. Later in life he divided his time between estates in New Hampshire and Florida. After his death the 'G. W. Armstrong Dining Room and News Co.' continued to operate for about 20 years.