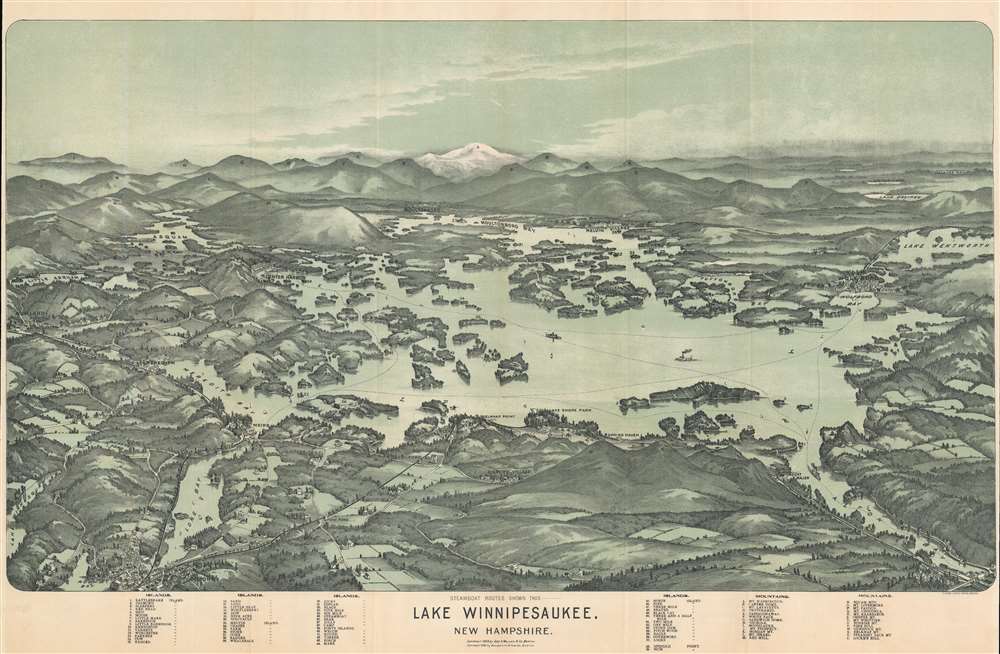 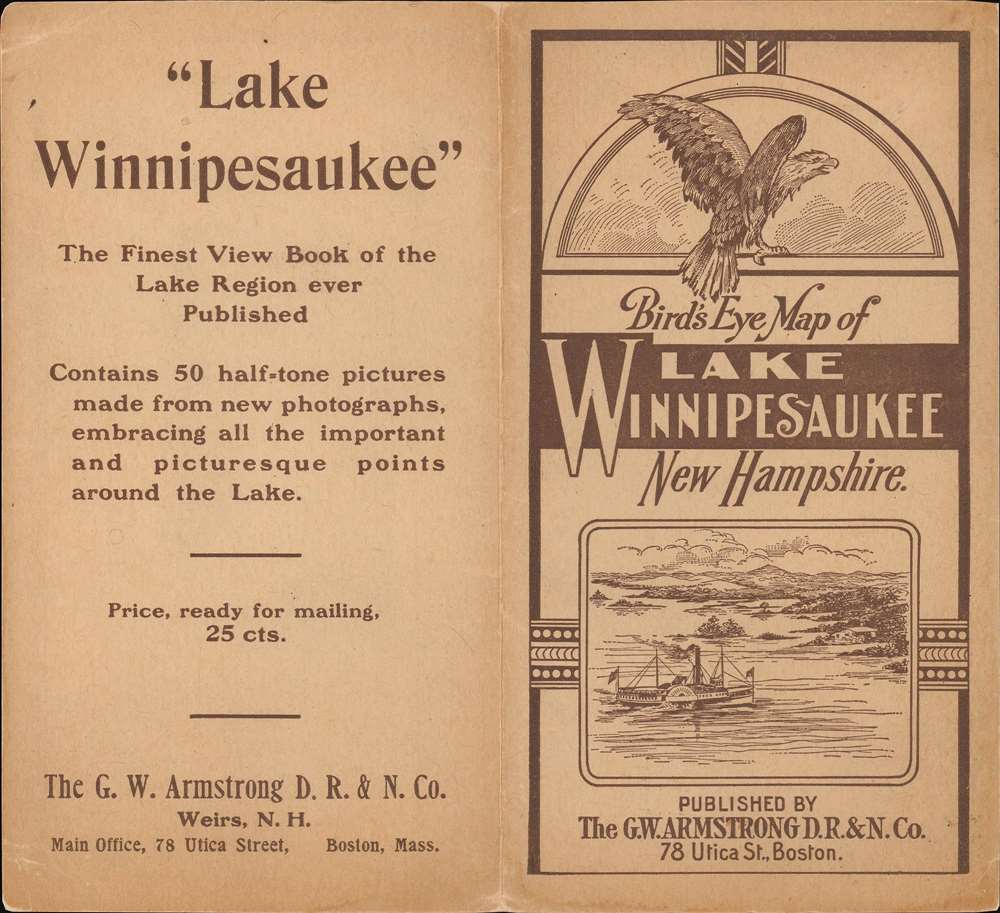 This is a beautiful 1909 chromolithograph bird's eye view style pocket map of Lake Winnipesaukee, New Hampshire by the George H. Walker and Company, Boston. This view was published for distribution at George W. Armstrong's railroad newsstands. One of the more obscure and rare maps by George Walker, it covers the popular summertime destination from Little Asquam and Lake Winnesquam to Lake Wentworth and from Alton Bay and Round Bay to Moultonboro and Walkers Pond. The map includes many New Hampshire islands, towns, and bays, including Center Harbor, Asquam, Moultonboro, Wolfboro, Lake Wentworth, Lake Ossipee, Long Bay, Meredith Bay, Alton Bay, Round Bay and several others. The White Mountains are shown in the background, centered on a snow-covered Mt. Washington. The foreground features houses and fields with sailboats and steamships in the water. Fifty-nine islands and twenty-six mountains are included as keyed references along the bottom margin. The map also shows major railway lines. It is accompanied by its original cover.

This map was drawn and lithographed by George H. Walker in Boston. This is the second edition, published by the G. W. Armstrong Dining Room and News Co., Boston Massachusetts. Four examples of the scarce 1909 edition are cataloged in OCLC and are part of the collection at Columbia University, the State Library of Massachusetts, Dartmouth Library, and the Huntington Library, Art Museum, and Botanical Gardens.


George Washington Armstrong (August 11, 1836 - June 30, 1901) was an American businessman and newspaperman active in Boston and Maine from the mid 19th to the early 20th century. Armstrong was born in Boston, Massachusetts. His family were among the first Scottish settlers in New Hampshire in the early 1700s. He was educated at the Hawes Grammer School. In 1850, when Armstrong was just 14, his father died and, receiving 83 USD from the estate, he quit school and set out on his own. He initially took work as a penny postman covers South Boston. Later he became an office boy for the South Boston Gazette and Saturday News. Two years later, in 1852, he became a newsboy on the Boston- Worcester Line, a position he held for 9 years, and which defined much of his future. In 1863, he became half-owner of the restaurant and newsroom at the Boston station of the Boston-Albany Line (previously the Boston-Worchester). By 1871, he was the sole owner, operating as the 'G. W. Armstrong Dining Room and News Co.' Achieving considerable success in the news business, he launched Armstrong's Transfer, a goods and baggage transport service that utilized the trolleys and railroads. He expanded his newsroom business by acquiring all news and restaurant services entire Boston-Albany line, the Hoosac Tunnel Line, and the Eastern Railroad. He later diversified his holdings into bank and railroad stock. As part of his news business, Armstrong published a number of booklets, pamphlets, and maps for sale along the most popular routes he serviced. Later in life he divided his time between estates in New Hampshire and Florida. After his death the 'G. W. Armstrong Dining Room and News Co.' continued to operate for about 20 years. Learn More...