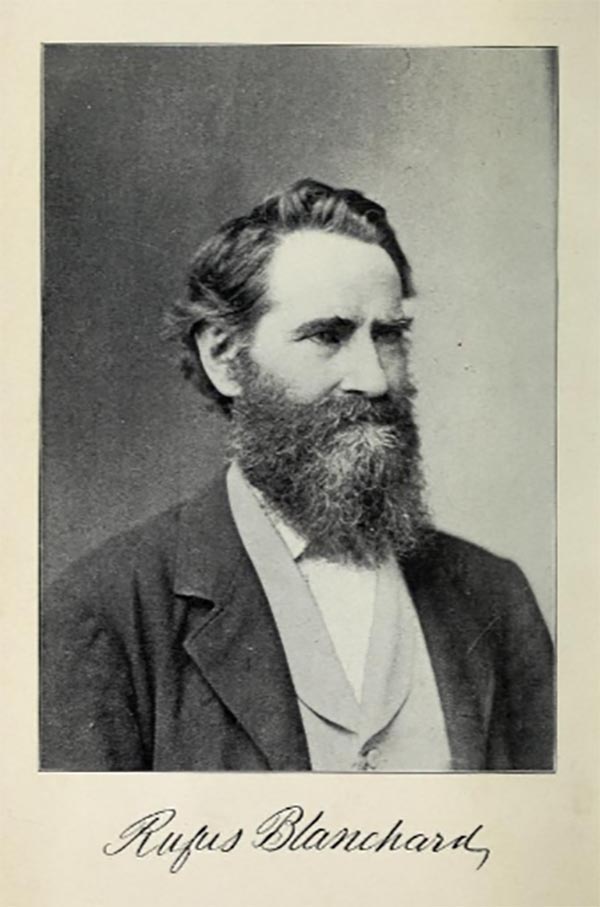 Rufus Blanchard Evanston (March 7, 1821 - January 3, 1904) was an American photographer, mapmaker, publisher, viewmaker, bookseller, and publisher active in Chicago in the second half of the 19th century. Blanchard was born in Lyndeborough, New Hampshire. He studied at Ipswich Academy showing proficiency in Latin and Mathematics. He relocated to New York in 1835 to live with this brother, Calvin Blanchard, who ran a book store at 78 Nassau St. He was present for both the New York Fire of 1835 and the Wall Street bank panic of 1836. Perhaps deciding the civilization was doomed, he moved to the backwoods of Ohio where he spent three years, bushwhacking, hunting, and trapping. Returning to New York in 1840, Blanchard took work with the Harper Brothers publishing house. The publishing business suited Blanchard, leading to his relocation to Lowell, Massachusetts in 1843 to open a bookshop. This business lasted just 3 years before the restless young man moved again, this time to Cincinnati, who he established another shop in connection with his brother Edwin Blanchard. Meeting some success here, he established an annex office in New Orleans. The Cholera epidemic of 1847-1848, followed by the great fire of St. Louis, unfortunately, devastated his interests in the region. He moved back to New York in 1849, briefly establishing a printing concern with Charles Morse, son of the famous inventor, and working with the J. H. Colton firm. He relocated to Chicago sometime before 1853, when he established in that city as a printer and publisher. He relocated his business to the railroad hub of Chicago (52 LaSalle Street) in 1854 to capitalize on the national need for good railroad maps. In 1857, he published Chicago's first street guide. In addition to his Chicago business, he also had an office in Wheaton, Illinois. His nephew, George Cram (1842 - 1928) joined his business in 1867, after being discharged from the Union Army, and they rebranded as 'Blanchard and Cram.' Both 'Blanchard and Cram' of Chicago and the Wheaton businesses were destroyed in 1871 - the main business by the Great Chicago Fire, and the Wheaton office, in a smaller fire. Nonetheless, Blanchard persevered, rebuilding both enterprises, although without Cram, who established his own firm, the George F. Cram and Company. In 1885 his business was again destroyed by fire, wherein he lost much of his map stock, but he again persevered and rebuilt. Blanchard's personal life was a notable for highs and lows as his business life. He first married in 1856, to Permilla Far (1829 - 1857). On their honeymoon, Permilla was severely injured, dying shortly thereafter, in 1857, from related complications. He remarried in 1858 to Anna E. Hall (1842 - 1925). Blanchard lived to 83, and during the entire time, continued to actively photograph, write, and publish. It is said that he 'never grew old in heart or brain.'