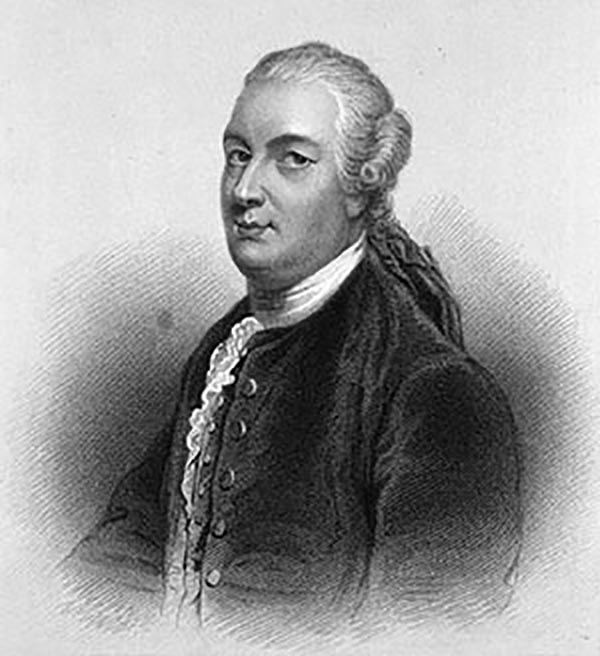 James Bruce (December 14, 1730 - April 27, 1794) was a Scottish explorer, traveler, and nobleman active in the later part of the 18th century. Bruce's romantic adventures in North Africa and Arabia make a tale worthy of Hollywood. Descended from the great Scottish King Robert the Bruce, James Bruce was born at his family seat in Kinnaird, Stirlingshire, Scotland. He was educated in Law at Harrow School and Edinburgh University and, marrying into a family business, became a wine merchant. Following the 1762 war with between England and Spain, Bruce was sent to Algiers with a commission to study Roman antiquities in the region. Many adventures followed that eventually led Bruce to Alexandria, Egypt, where he determined to discover the source of the Nile, which he believed to be in Ethiopia. Bruce traveled up the Nile and, after visiting Luxor worked his way overland to the Red Sea port of Kosseir (Old Cosseir), where he embarked upon a merchant ship disguised as a Turkish sailor. In this guise Bruce made his way to Massawa, where is disembarked and, traveling overland via Axum, arrived at the Abyssinian capital at Gondar. From Gondar, local guides led Bruce southwards to Laka Tana, and then along the Abay River to the Gish Abay springs, the legendary source of the Blue Nile. Bruce believed that the Blue Nile was the Nile of antiquity and claimed, falsely, that it was the larger of the two Nile tributaries. In his narrative Bruce further announced that he had discovered the source of the Nile, while in fact, the first Europeans to visit Gish Abay were the 16th century Spanish Jesuit Pedro Paez and, later, the 17th century Portuguese Jesuit Jeronimo Lobo. On his return journey, Bruce followed the Blue Nile to its confluence with the White, becoming the first European to visit the site. Bruce's explorations were significant and, on his return to Kinnaird, he published a lavishly illustrated narrative of his travels in five volumes. Bruce's tales of Ethiopian architecture, culture, and life where heavily ridiculed by the scholars of this day. Modern researchers, however, have proven that much of Bruce's narrative was substantial and accurate, thus affirming his significant contribution to the cartographic corpus. Snubbed by his peers, Bruce retired to Kinnaird, where he remained until his death in 1794. Modern day conspiracy theorists have added an interesting twist to Bruce's Ethiopian adventures. They claim that Bruce had a second, more important motivation - to rediscover ancient Templar secrets and artifacts hidden in Ethiopia. Some believe that Bruce, having inherited secret Templar knowledge from his ancestor, Robert the Bruce - who sheltered the Templars during their prosecution in the 14th century - was searching Ethiopia for the secrets of the Ark of the Covenant and other religious artifacts. Though Bruce kept silent on what he found, if anything, many Ethiopians maintain that the Ark of the Covenant is, to this day, kept at a sacred sanctuary in Axum.

1790 James Bruce Map of Egypt, Abyssinia, and the Red Sea