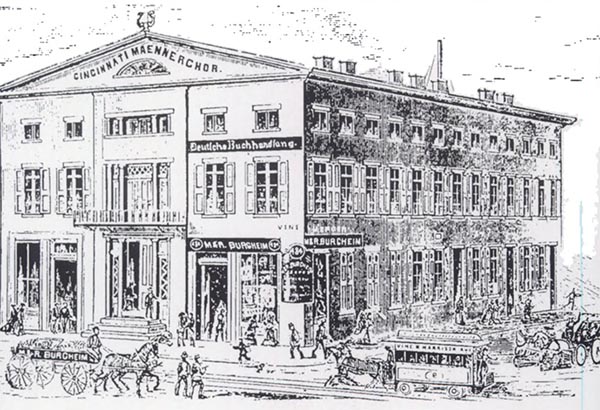 Max Burgheim (1849 – 1935) was a Cincinnati based printer and political figure active the late 19th and early 20th centuries. Burgheim probably immigrated from Germany in the 1850s, and like many German immigrants, established himself in Cincinnati. He operated a German American Bookstore and published, along the R. Burghiem (relative>) several important books promoting Cincinnati's German heritage, including Cincinnati in World und Bild and Cincinnati Fuhrer Illustrirt. He also apparently had a profitable export business shipping German calendars and fairy books to Germany. He is identified in the 1909 Business Directory of Cincinnati as the president of the Cincinnati Freie Presse, a German language daily newspaper with offices situated at Canal and Vine in the Over-the-Rhine neighborhood. He also operated the Abend Presse. He was also politically active as the City's Health and Safety Commissioner, and in 1899 Police Commissioner. Burgheim was a staunch opponent against organized labor.