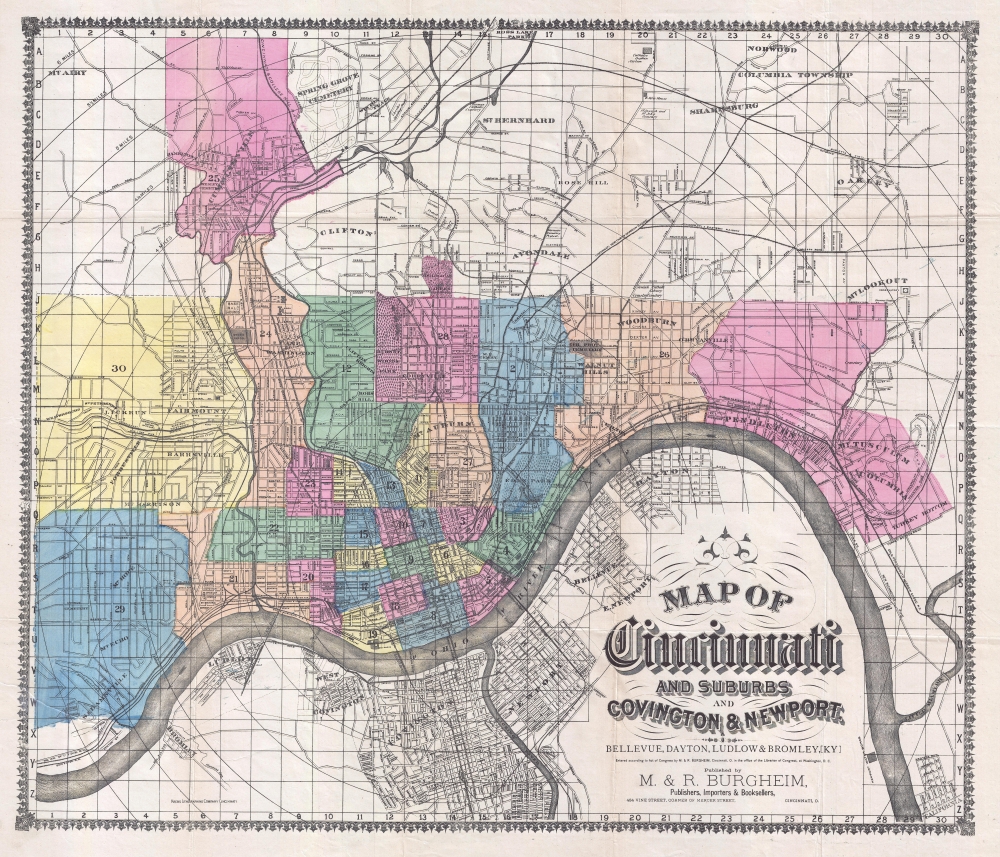 One of the largest and most beautiful map of Cincinnati, printed in Cincinnati, to appear in the 19th century.
$1,750.00

A stunning large format map of 1888 map of Cincinnati by Max Burgheim, this is one of the finest maps of CIncinnati to appear in the 19th century. The map covers all of Cincinnati as it existed at the time as well as some outlying areas from Spring Grove Cemetery and Cummminsville to Covington and Newport in adjacent Kentucky. It names streets and identifies city wards with color coding – including the hip Over-The-Rhine district and the Central Business District where Burgheim's shop was located (484 Vine). The grounds of Eden Park are laid out with some clarity with footpaths and important buildings identified. The John A. Roebling Suspension Bridge, a precursor to the Brooklyn Bridge, is identified simply as 'Suspension Bridge.'

This map was prepared for Bergheim's Cincinnati in Wort und Bild, a beautifully produced and voluminous German language book extolling the German heritage of Cincinnati and the virtues of Cincinnati in general. The volume was first issued in 1888 and contained this map. An earlier, smaller version of this map, under a similar title, was issued in Burgheim's 1875 Cincinnati Fuhrer Illustrirt. Because the similar in titles, this map is frequently seen misdated by as much as 5 years. This map was printed in Cincinati by Adolph Krebs.

Max Burgheim (1849 – 1935) was a Cincinnati based printer and political figure active the late 19th and early 20th centuries. Burgheim probably immigrated from Germany in the 1850s, and like many German immigrants, established himself in Cincinnati. He operated a German American Bookstore and published, along the R. Burghiem (relative>) several important books promoting Cincinnati's German heritage, including Cincinnati in World und Bild and Cincinnati Fuhrer Illustrirt. He also apparently had a profitable export business shipping German calendars and fairy books to Germany. He is identified in the 1909 Business Directory of Cincinnati as the president of the Cincinnati Freie Presse, a German language daily newspaper with offices situated at Canal and Vine in the Over-the-Rhine neighborhood. He also operated the Abend Presse. He was also politically active as the City's Health and Safety Commissioner, and in 1899 Police Commissioner. Burgheim was a staunch opponent against organized labor. Learn More...


Adolph K. Krebs (1831 – September 15, 1884) was a Cincinnati, Ohio, lithographer active in the second half of the 19th Century. Born in Germany, Krebs came to Cincinnati with his family in 1847. After arriving in Cincinnati, Krebs worked as an apprentice at Sherer and Rowse in the late 1840s. He then moved to Klauprech and Menzel and worked there until 1852. That year he moved to Pittsburgh to start a lithographic firm with his younger brother Otto. Krebs fought in the American Civil War, was captured, and imprisoned at the infamous Andersonville prison. After the Civil War, Krebs returned to Cincinnati. Krebs joined Ehrgott and Forbriger (after Peter E. Ehrgott and Adolphus F. Forbriger) in 1869 following the death of Adolph Forbriger. The firm operated under the name Ehrgott and Krebs from 1870 until 1873. Krebs became sole owner of the firm in 1874 after Peter Ehrgott retired. That year he renamed the firm Krebs Lithographic Company, and built a large new facility. Krebs took on partners William D. Henderson (1842 - 1920), and F. Veigel but maintained overall ownership and management of the company. Under Krebs the firm reached new heights, producing both lithographic and chromolithographic items, including bonds, checks, diplomas, drafts, maps, and views. The Cincinnati firm was based in the Carlisle Building, where, at their largest, they occupied two full floors. Henderson left the firm in 1885 to form his own company with Fred Achert (1847 - 1928), the Henderson-Achert Company. In 1890, a fire destroyed the Henderson-Achert Company. Henderson chose to buy the Krebs Lithographing Company instead of rebuilding his own firm. He renamed the firm Henderson-Achert-Krebs and installed Achert as vice president. Achert left the firm in 1896 to found his own firm, the Achert Lithographic Art Company. After Achert left, the firm was renamed the Henderson Lithographic Company. Strobridge purchased the company in 1925 but the Henderson name remained until the late 1930s. Learn More...