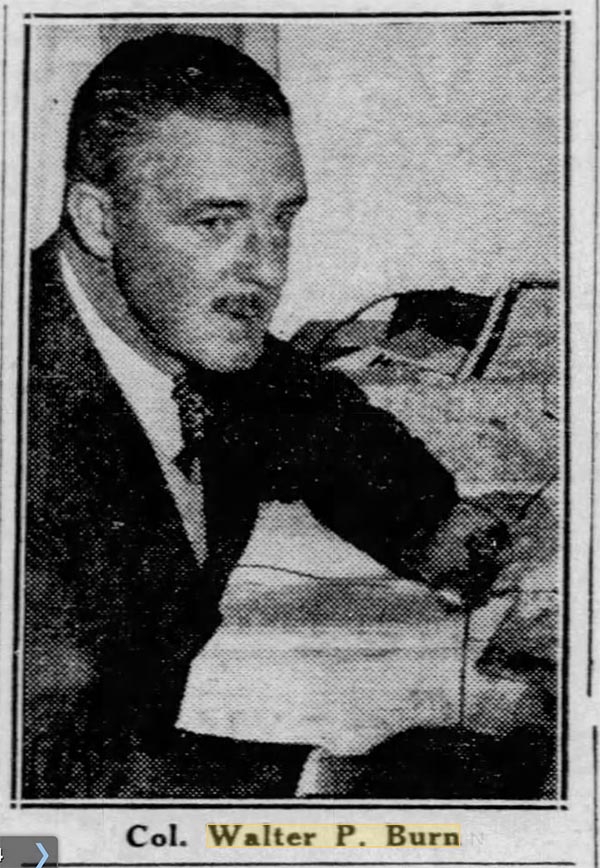 Colonel Walter Pierron Burn (July 17, 1894 - December 4, 1959) was an American advertising agent, artist, cartographer, and military officer. Born in Brooklyn, New York, Burn attending Polytechnic Prepartory School in Brooklynns before serving in the U.S. Army in World War I, attained the rank of major, and fought in five campaigns. He served with Company F, 6th U.S. Engineers, 3rd Infantry Division. After the war, Burn worked as the Pacific Coast Manager, and then the Eastern manager, of the Bureau of Advertising of the American Newspaper Publishers Association. Burn founded his own firm, Walter P. Burn and Associates, in 1936. This company developed special maps and marketing studies for magazines and radio stations. The firm won the National Advertising aware for original research in 1939 fo a series of economic studies for Printers' Ink, the principal business paper of the advertising field. He remained active in the Army Officers' Reserve Corps and was called to active service in 1941. Upon his return to the Army, Burn was appointed chief of training for the newly-formed office of civilian defense. In that position he created the plan, trained the personnel, and produced the directives, texts, handbooks, and films that formed the basis of war activity for several millions of American civilians. After Pearl Harbor, Burn requested a transfer to 'active troop service' and was made the chemical officer of II Corps. Burn landed with II Corps in North Africa, Sicily, and Italy, and was decorated at least three times during World War II. After being wounded at Monte Cassino, Burn was discharged, and he and his family moved to Middlebury, Vermont, where Burn continued his work in advertising and also became the curator of maps at Middlebury College, a position he held until 1957 when he retired due to declining health. Burn married his wife, Marguerite Clement, on September 17, 1917, in New York, with whom he had at least two sons.