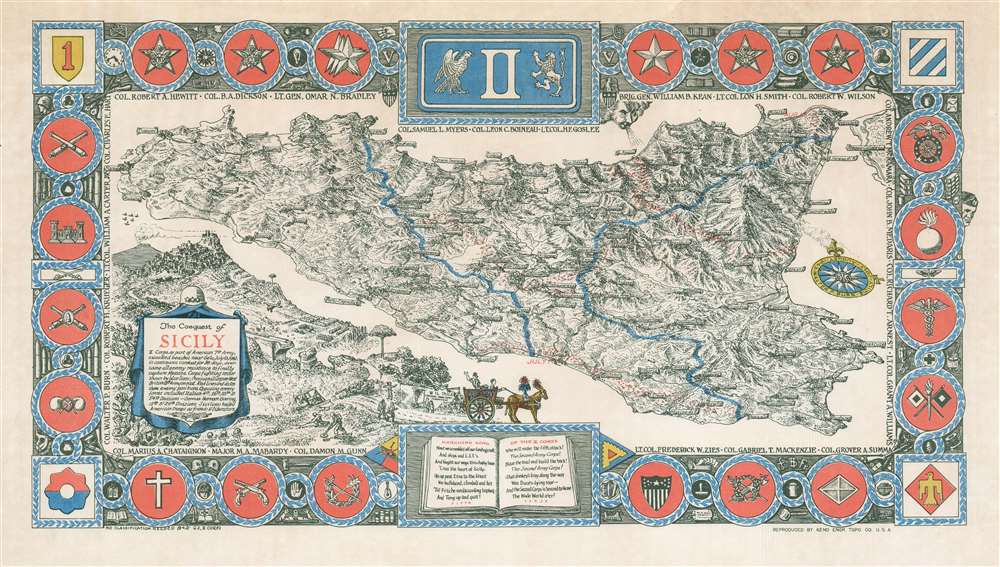 Created by a veteran of the Sicily Campaign.

This is a 1943 Walter P. Burn pictorial map of Sicily celebrating the Allied conquest of the island and created for the soldiers of II Corps. Depicting Sicily in its entirety, numerous cities and towns are identified throughout the island, including Gela (where the 1st Infantry Division landed), Marsala, Palermo, and Messina. The blue lines demarcate the fighting sector assigned to II Corps. Lines of red dots follow the retreat of Axis defensive lines and underscore Allied progress across the island as of July 10 (the day of the landings), July 13, August 1-6, and August 13. The insignia in the corners represent the U.S. 9th Infantry Division, the U.S. Seventh Army, the U.S. 1st Infantry Division, the U.S. 3rd Infantry Division, and the U.S. 45th Infantry Division. The insignia of II Corps occupies the top center. The smaller insignia along the sides, top, and bottom represent more specific units, such as the Signal Corps, Engineers, Medical Corps, and Artillery. The three stars just to the left of the II Corps insignia signify Lieutenant Omar Bradley, the commander II Corps during Operation Husky, and the one star on the right references Brigadier General William B. Kean, Bradley's chief of staff. Names of officers surround the entire map and create an inner border, and a cartouche in the lower-left corner provides a summary and explanation of the piece.

Operation Husky and the Battle of Sicily

Launched on the night of July 9-10, 1943, the Allied invasion of Sicily was codenamed, Operation Husky. A combined airborne and amphibious landing, the Allies conquered Sicily in six weeks. Allied planners saw three strategic reasons for capturing Sicily. The first, securing sea lanes through the Mediterranean, meant that Allied shipping would be able to operate in the Mediterranean for the first time since 1941. The second and third were knocking Italy out of the war and diverting German troops from the Eastern Front to southern Europe, thereby taking pressure off Joseph Stalin's Red Army. The second and third goals turned out to be intertwined. Once the Allies pushed all the German and Italian troops out of Sicily, the Italian populace rose and overthrew Benito Mussolini, Italy's fascist dictator. Mussolini's overthrow forced Hitler and Nazi Germany to cancel a planned offensive near Kursk and to redeploy a fifth of the troops along the Eastern Front to Italy and the Balkans, which took some pressure off the Red Army and divided Hitler's attention.

This map was created by Walter P. Burn in 1943 and was printed by the 62nd Engineer Topographic Company in Europe during World War II. This is the only known surviving example.

Colonel Walter Pierron Burn (July 17, 1894 - December 4, 1959) was an American advertising agent, artist, cartographer, and military officer. Born in Brooklyn, New York, Burn attending Polytechnic Prepartory School in Brooklynns before serving in the U.S. Army in World War I, attained the rank of major, and fought in five campaigns. He served with Company F, 6th U.S. Engineers, 3rd Infantry Division. After the war, Burn worked as the Pacific Coast Manager, and then the Eastern manager, of the Bureau of Advertising of the American Newspaper Publishers Association. Burn founded his own firm, Walter P. Burn and Associates, in 1936. This company developed special maps and marketing studies for magazines and radio stations. The firm won the National Advertising aware for original research in 1939 fo a series of economic studies for Printers' Ink, the principal business paper of the advertising field. He remained active in the Army Officers' Reserve Corps and was called to active service in 1941. Upon his return to the Army, Burn was appointed chief of training for the newly-formed office of civilian defense. In that position he created the plan, trained the personnel, and produced the directives, texts, handbooks, and films that formed the basis of war activity for several millions of American civilians. After Pearl Harbor, Burn requested a transfer to 'active troop service' and was made the chemical officer of II Corps. Burn landed with II Corps in North Africa, Sicily, and Italy, and was decorated at least three times during World War II. After being wounded at Monte Cassino, Burn was discharged, and he and his family moved to Middlebury, Vermont, where Burn continued his work in advertising and also became the curator of maps at Middlebury College, a position he held until 1957 when he retired due to declining health. Burn married his wife, Marguerite Clement, on September 17, 1917, in New York, with whom he had at least two sons.

Very good. Closed margin tear professionally repaired on verso. Even overall toning. Blank on verso.
Looking for a high-resolution scan of this?