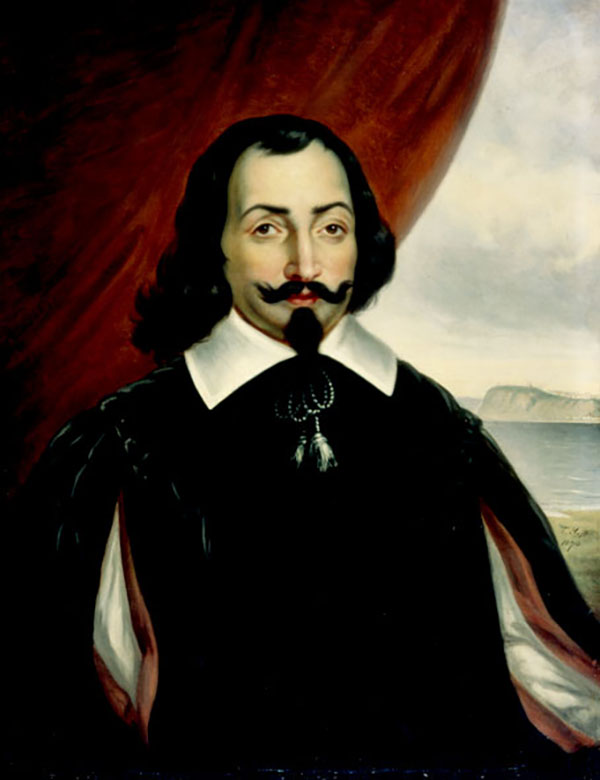 Samuel de Champlain (August 13, 1574 - December 25, 1635), known as the 'Father of New France', was a French navigator, cartographer, draftsman, soldier, explorer, geographer, ethnologist, diplomat, and chronicler. Champlain was born wealthy but non-noble merchant family. His first major travels were a 1598 voyage to the West Indies on a trading mission with his uncle-in-law, a navigator. On his return to France, he inherited in uncle's substantial estate, including a 150-ton merchant ship. At this time, he acquired the patronage of the King of France, Henry IV, who he severed as royal cartographer, compiling numerous maps of the Americas from reports from French fishermen visiting the Grand Banks. With the King's permission, he sailed to the America on his first major voyage to New France as an observer on a fur-trading expedition led by François Gravé Du Pont. Du Pont taught Champlain navigation and introduced him to the people, places, and customs of New France. Champlain compiled several maps on the voyage, including a chart of the Saint-Lawrence River. Upon his return he published Des Sauvages: ou voyage de Samuel Champlain. Champlain joined a second expedition to New France in the spring of 1604. This long voyage lasted to 1610 and it was during this period that he mapped much of the coast and founded what is today Quebec City. He also built and maintained close relationships with those American Indian tribes who were allied with the French, most specifically the Huron, Wendat, Algonquin, and others, advising them in their constant wars with the Iroquois. Champlain returned to France on hearing of the assassination of his friend and patron, Henry IV. He remained in France long enough to marry and reestablish political connections before returning to New France in 1615. There he participated in a military expedition with the Huron against the Iroquois. This was his most epic voyage wherein he traveled and lived with the Huron, exploring deep into Huron Territory, up the Ottawa River as far as Lake Nipissing, and the along the shores of Lake Huron, becoming to the first European to visit these regions. He returned to France in 1616 and prepared the publication of yet another important work on New France. In 1620, back again in New France, this time as de facto governor, a post he could not officially hold as he was not a nobleman. He remained there until the colony was captured by the English in 1628. Champlain traveled to England to organize the return of Quebec to France and, when this occurred in 1633, he was again appointed unofficial governor. Shortly thereafter,, in October of 1635, Champlain suffered a severe stroke. Never recovering, he died on December 25the of that year leaving no immediate heirs. Champlain complied numerous maps and wrote five books about the New World. In his adventurous life, he crossed the Atlantic more than 25 times, never losing a single ship. His name is today lionized both in Quebec and in France.