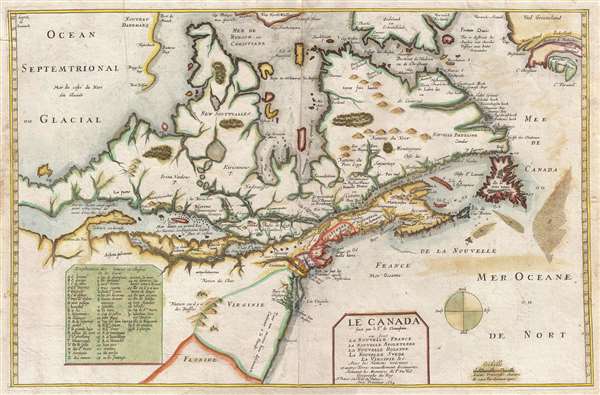 Truly one of the most intriguing maps we have had the privilege of working with. Ostensibly, this is the second edition of Pierre Du Val's map, Le Canada, but hidden within this map is one of the great historic maps – Samuel de Champlain's unpublished map of 1616 exhibiting a missing link between Champlain's cartography of 1612 and 1632! The map constitutes the first appearance of Lake Huron and Ontario on a printed map and the first appearance of the route to the Ottawa River. This map was initially believed to be a historical map issued by Du Val in 1653 to illustrate Champlain's voyages. In 1953, ironically 300 years later, the John Carter Brown library acquired an unrecorded map of the same region that, upon close study, is clearly an incomplete proof state of the current map. The JCB map contains the inscription 'faict par le sr. de Champlain' (made by Sieur de Champlain), which is also included on our map, and the significant date, '1616'.

Champlain returned to Paris from his last and greatest voyage of discovery in September of 1616. As on his return from previous voyages, Champlain immediately prepared a map and ordered it engraved, most likely by the house of Melchior Tavernier (Burden speculates it may have been the father, Gabriel Tavernier), in anticipation of the publication of his discoveries in Voyage et descouvertures faites en Nouvelle France. This book was ultimately published in 1619, but did not contain the present map. Why the map was not published as intended unclear, but its suppression may have been related to political and/or economic maneuverings in France.

The map plate subsequently fell into the hands of Pierre Du Val. Melchior Tavernier's estate was liquidated in 1640, so Du Val may have acquired the plate anytime between then and 1653. As the paper is identical, there is strong evidence that the JCB proof state was printed by Du Val soon after acquiring the plate as a test-run before completing it with new place names, his own imprint, and other information. Du Val ultimately published the first state in 1653, and five successive states followed.

A Missing Link in Champlain Cartography

Cartographically the map is derived partially from Champlain's map of 1612, but is more ambitious in scope and augmented by new information from his epic voyage of 1615-1616. According to Burden, Champlain,

arriving in Quebec in the Spring of 1615, agreed to accompany his Indian allies into Huron Territory to encourage their support for a campaign against the Iroquois. They travelled some 700 miles deep into territory not recorded before, going up the Ottawa River and across to Georgian Bay on Lake Huron, Mer Douce. From there they worked their way down to Lake Ontario, Lac St. Louis, and into Iroquois territory. At a place near present day Lake Oneida they fought an inconclusive battle with the Onondaga Indians. Unfortunately, Champlain suffered a serious injury to his leg and had to be carried for a number of days. None of the Indians was willing to accompany him back to Montreal so he spent the winter with them. During this time he explored even further west along the south-eastern shore of Lake Huron.

The scope of the map being far greater than Champlain's earlier map, the present map extends from an embryonic mapping of the Great Lakes to Greenland, and from the upper Hudson Bay to the Chesapeake Bay, Virginia and even Florida. It is, notably, the earliest map to incorporate John Smith geography, other than Smith's 1612 original, in regard to the Chesapeake Bay. Champlain also exploits Dutch cartography in the vicinity of New York and New Jersey identifying Les Flamans or Dutch presence, information that would have been known to very few given that their occupation of this region only dates to 1614. Du Val incorporates additional information in 1653 by identifying both New Amsterdam and New Sweden – place names not present on the 1616 JCB/Champlain proof.

The first map to show Lake Ontario and Lake Huron

The treatment of the Great Lakes is of substantial interest, this being the first printed map to identify both Lake Huron and Lake Ontario. Huron is here identified as Mer Douce or Grand Lac des Hurons, in reference to the local Huron Tribe, allies of the French. Lake Ontario is named Lac St. Louis. Lake Erie appears via a river connection just southeast of Ontario, but is vastly undersized. The 1616 JCB/Champlain proof does not identify Erie by name, but this information is present on all Du Val printings. A note in the western part of Lake Huron points to a saline sea far to the west. What this may refer to is unclear, as it is unlikely that the Huron had any inkling of the Great Salt Lake or the Pacific. A narrow isthmus separates Huron from a great glacial sea to the north leads to speculation that this map also be the first indication of Lake Superior on a map.

Some additional notes. The map identifies the important fisheries of Grand Banks, one of the driving economic forces leading to the development of European colonies in New England and Canada. It also notes Hudson Bay in far greater detail than most previous maps. Frobisher Strait incorrectly penetrates Greenland and the true Frobisher Bay, although not was yet known as such, is identified as Varwick Forland. In the bottom right quadrant, a table identifies some 58 locations via alpha-numeric reference points on the map.

This map exists in five states in addition to the JCB/Champlain proof. All states are rare, particularly state 1 and 2, which are seldom seen on the market and commonly command a premium.

Samuel de Champlain (August 13, 1574 - December 25, 1635), known as the 'Father of New France', was a French navigator, cartographer, draftsman, soldier, explorer, geographer, ethnologist, diplomat, and chronicler. Champlain was born wealthy but non-noble merchant family. His first major travels were a 1598 voyage to the West Indies on a trading mission with his uncle-in-law, a navigator. On his return to France, he inherited in uncle's substantial estate, including a 150-ton merchant ship. At this time, he acquired the patronage of the King of France, Henry IV, who he severed as royal cartographer, compiling numerous maps of the Americas from reports from French fishermen visiting the Grand Banks. With the King's permission, he sailed to the America on his first major voyage to New France as an observer on a fur-trading expedition led by François Gravé Du Pont. Du Pont taught Champlain navigation and introduced him to the people, places, and customs of New France. Champlain compiled several maps on the voyage, including a chart of the Saint-Lawrence River. Upon his return he published Des Sauvages: ou voyage de Samuel Champlain. Champlain joined a second expedition to New France in the spring of 1604. This long voyage lasted to 1610 and it was during this period that he mapped much of the coast and founded what is today Quebec City. He also built and maintained close relationships with those American Indian tribes who were allied with the French, most specifically the Huron, Wendat, Algonquin, and others, advising them in their constant wars with the Iroquois. Champlain returned to France on hearing of the assassination of his friend and patron, Henry IV. He remained in France long enough to marry and reestablish political connections before returning to New France in 1615. There he participated in a military expedition with the Huron against the Iroquois. This was his most epic voyage wherein he traveled and lived with the Huron, exploring deep into Huron Territory, up the Ottawa River as far as Lake Nipissing, and the along the shores of Lake Huron, becoming to the first European to visit these regions. He returned to France in 1616 and prepared the publication of yet another important work on New France. In 1620, back again in New France, this time as de facto governor, a post he could not officially hold as he was not a nobleman. He remained there until the colony was captured by the English in 1628. Champlain traveled to England to organize the return of Quebec to France and, when this occurred in 1633, he was again appointed unofficial governor. Shortly thereafter,, in October of 1635, Champlain suffered a severe stroke. Never recovering, he died on December 25the of that year leaving no immediate heirs. Champlain complied numerous maps and wrote five books about the New World. In his adventurous life, he crossed the Atlantic more than 25 times, never losing a single ship. His name is today lionized both in Quebec and in France. Learn More...


Pierre Du Val (May 19, 1619 – September 29, 1683) was a French cartographer and publisher active in Paris during the middle part of the 17th century. He was born Abbeville, Picardie, France, where his father, also Pierre, was a merchant, consul, and alderman. His mother was Marie Sanson, sister of Nicolas Sanson d'Abbeville (1600-1667), the leading French cartographer of his day. Du Val and probably apprenticed in Sanson's workshops. Afterwards, in Paris, he studied geography under Jean-Baptiste Gault, who later became the Bishop of Marseilles. He counseled M. Henri of Savoye, abbot of St. Sorlin, and M. Gilles Bouraut, bishop of Aire and later Evreux, in matters of science and geography. Du Val became Geographe ordinaire to Louis XIV in 1650. His first atlas, the 1654 Cartes Geographiques Methodiquement Divisees, contained few of his own maps and was mostly compiled from reissues of maps by other cartographers. His early work focused on atlases and geographical treatises, but later, he turned his attentions to large separate issue, often multi-sheet maps. After his death in 1683, his widow, Marie Desmaretz, continued his business at least until 1684, after which it passed to his daughters (either Marie-Angelique or Michelle), who published until at least 1688. Learn More...