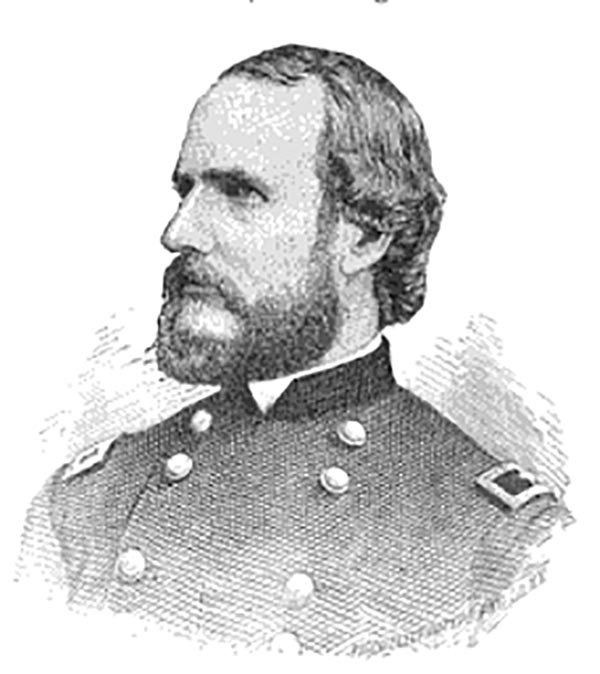 Cyrus Ballou Comstock (February 3, 1831 - May 29, 1910) was an officer in the Army of the United States. Born in Wrentham, Massachusetts, Comstock attended the United States Military Academy at West Point, from which he graduated first in his class in 1855. After graduating, Comstock served in the Army Corps of Engineers and he assisted with the design and construction of fortifications. Before the American Civil War, Comstock also held a post as an instructor of engineering at West Point. At the outbreak of the Civil War, Comstock was transferred from West Point to Washington, D.C., where ehe served on the staff of Brigadier General John G. Barnard, and helped design the fortifications of Washington. During General McClellan's Peninsular Campaign in 1862, Comstock served as chief engineer of the II Corps. Then, after Burnside succeeded McClellan, Comstock was named the Chief Engineer of the Army of the Potomac. In this position he was faced with the challenging task of constructing pontoon bridges over the Rappahannock River during the Fredericksburg Campaign, which ended in disaster. Due to logistical confusion, the supplies necessary for the construction of pontoon bridges did not arrive at the correct location on time. In the course of the month-long wait for supplies, the Union army lost the element of surprise and the Confederates were able to dig in at Fredericksburg, Virginia. When General Hooker took over command of the Army of the Potomac in 1863, Comstock was removed from his position as chief engineer and was put in charge of a battalion of engineers. After the Battle of Chancellorsville, Comstock was transferred to the Army of the Tennessee, which was in the middle of the Siege of Vicksburg, Mississippi, at the time. He set about improving the Union siege works, and impressed General Grant. Due to the impression he left on General Grant, Comstock was asked to served as Grant's senior aide-de-camp after he was appointed general-in-chief of the United States Army in March 1864. Comstock served on Grant's staff until the end of the war, but would be sent to help with several key operations before the end of the war. Grant sent Comstock to North Carolina to help plan the second (and successful) assault on Fort Fisher in January 1865 where he served under the command of Major General Alfred Terry. After the war, Comstock stayed in the army and served on Grant's staff until 1866, when he returned to the Corps of Engineers. He remained on active duty until 1895 and retired with the rank of colonel. In his post-war service he held positions on several boards and commissions, including the Permanent Board of Engineers in New York City, the geodetic survey of the north and northwestern lakes of the United States, and as president of the Mississippi River Commission for many years. Comstock was also a prominent member fo the National Academy of Sciences, bequeathing funds for a prize that the Academy was to award to a scientist who was conducting innovative work in the fields of electricity, magnetism, or radiant energy. Today, this prize is known as the Comstock Prize in Physics, and is awarded every five years by the Academy with a prize of $20,000. Comstock married Elizabeth 'Minnie' Blair in 1869, which whom he had one daughter, Elizabeth Marion Comstock, who was born in Detroit, Michigan in 1872