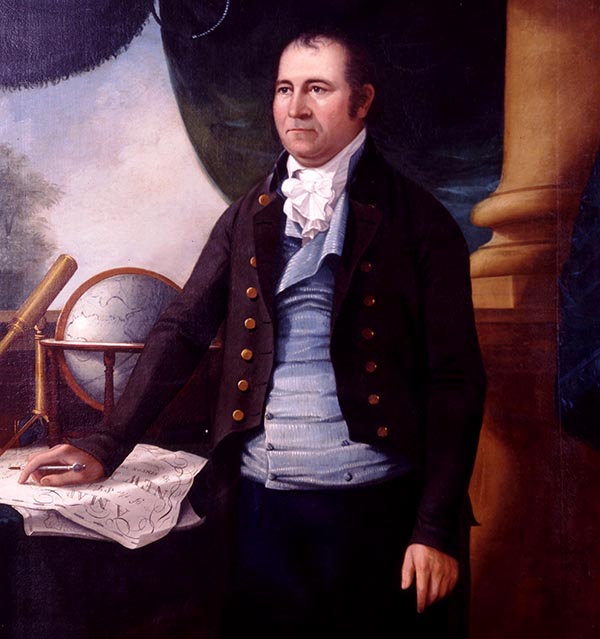 Simeon De Witt (December 25, 1756 - December 3, 1834) was an American geographer, surveyor, publisher, and politician based in New York during the late 18th and early 19th centuries. De Witt was born in Wawarsing, Ulster County, New York, the son of the well-educated physician Dr. Andries De Witt and wife Jannetje Vernooy De Witt, both of Dutch ancestry. He graded in 1776 from Queens College (Rutgers). During the American Revolutionary War (1775 - 1783) he volunteered for the Continental Army in New York City. He trained as a surveyor under his uncle James Clinton (1736 - 1812), and was thus commissioned as the assistant of Geographer and Surveyor of the Army, Colonel Robert Erskine (1735 - 1780). When Erskine died in 1780, De Witt took over his position. His cartographic work played a significant role in the successes of the Continental Army during the war. After the war, he pushed for various national mapping projects - all of which were rejected by the Continental Congress as too expensive and ambitious. He became the New York State Surveyor General in 1784, a position he held until his death, nearly 50 years later. He was a friend to George Washington, who described De Witt in a letter to Thomas Jefferson as, 'extremely modest, sensible, sober, discreet, and deserving of favors. He is esteemed a very good mathematician.' He was part of the 3-man 1807 - 1811 Commission tasked with laying out the iconic street grid of New York City - the Commissioner's Plan. De Witt also designed the street grids for his hometown of Albany and Ithaca. From 1829 until his death in 1834, De Witt was also Chancellor of the University of the State of New York. In addition, he is given credit for the Classical Greek and Roman names to the twenty-eight central New York Military Tract townships that his office mapped after the Revolutionary War, to be given to veterans in payment for their military service - however, it is likely that the unusual toponomy was the fancy of De Witt's assistant, the avid classicist Robert Harpur (1731 - 1825). De Witt was the cousin of DeWitt-Clinton, New York governor. He died in 1834 in Ithaca of the common cold.