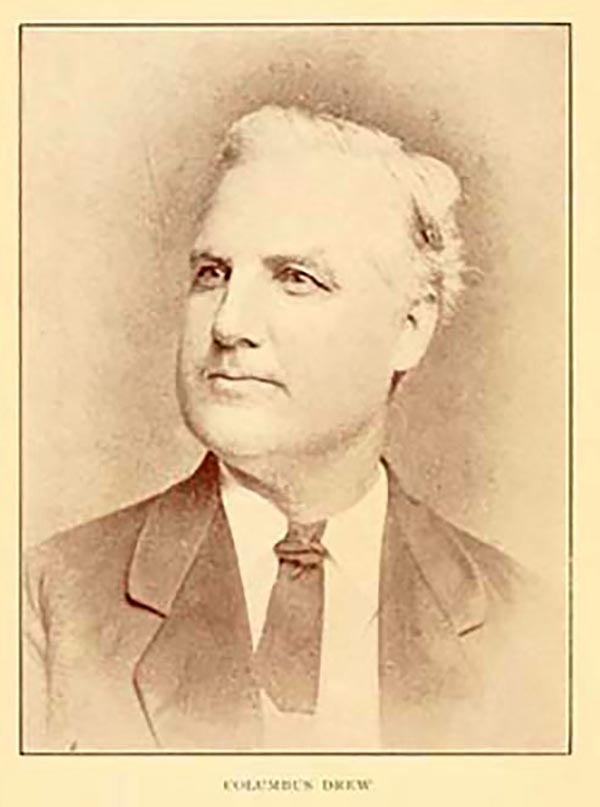 Columbus Drew (January 6, 1820 - July 8, 1891) was a Florida lawyer, politician, writer, bookseller, publisher, and printer active in the mid to late 19th century. Drew was born in Virginia and grew up in Washington D.C., earning a law degree. As a young man he worked with Gales and Seaton of the National Intelligencer. By 1847 he was working as an editor of the Whig-leaning American. Before the American Civil War (1861 - 1865), Drew was an ardent Whig. He was enticed to relocate to Jacksonville, Florida in 1848 to edit the Florida-Whig journal Republican. In 1855, Drew established his stationers business - one of the first in Jacksonville. Although as a Whig he opposed both slavery and the succession, when the Civil War broke out he remained loyal to his adopted state and worked for the Confederate cause. Drew moved briefly to Richmond to take a position in the Confederate Treasury Department. After the war he returned to his stationers shop in Jacksonville where he applied for and received a Federal Pardon for working with the Confederacy. In 1876, Drew was called upon to assume the post of state Comptroller. At this time he sold his stationery business to his son, Horace (January 20, 1854 - January 4, 1926), who renamed it 'H. Drew Company'. Shortly thereafter, in 1886, Horace took on his younger brother, William B. Drew, as a partner, renaming the firm 'H. Drew and Brother'. THe name was again changed in 1893, when it was formally incorporated as 'H. and W. B. Drew Company'. This firm still operates as 'Wells and Drew'. Columbus Drew was a leading figure in the development of Florida during the Reconstruction Era following the Civil War. His influence impacted the development of state railways, canals, drainage projects, and other civil works. Cartographically he is best known for the publication of his 1867 New Map of the State of Florida, which, through numerous editions and revisions, chronicles the history and development of the state during a critical period. This map is now extremely scarce in any edition. Horace Drew, who continued to publish an update his father's important map. The Drew family became leading citizens in Jacksonville and today their historic Victorian home enjoys landmark status. Drew is interred at the Old Jacksonville City Cemetery.