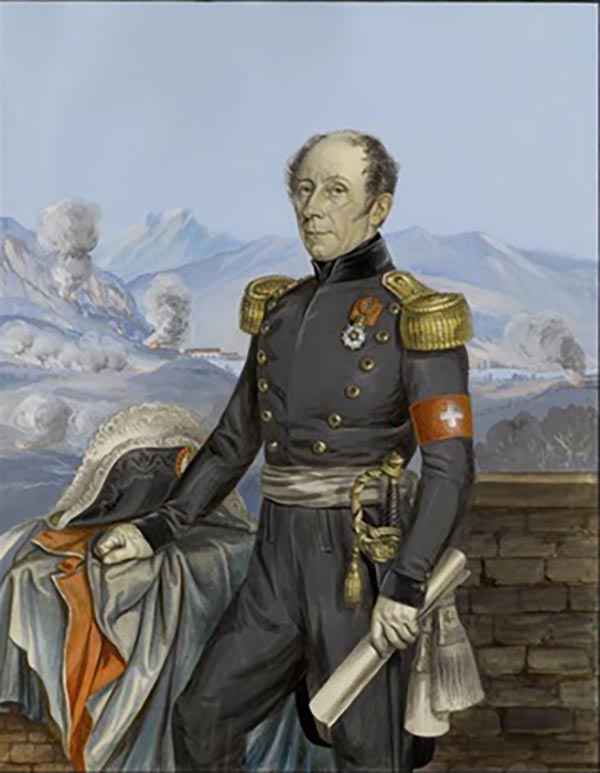 Guillaume Henri Dufour (September 15, 1787 - July 14, 1875) was a Swiss army officer, engineer and topographer. Though a career General and victorious military leader, he in 1864 presided over the First Geneva Convention, establishing the International Red Cross. As pertains to the cartographic world, was founder and president (1838 to 1865) of the Swiss Federal Office of Topography. The son of a watchmaker, Dufour had been sent school in Geneva where he studied medicine and drawing. He would go on to the École Polytechnique in Paris, then a military academy, where he studied descriptive geometry; this he followed studying military engineering at the École d'Application. When in 1810 he was sent to help defend Corfu against the British, he spent his downtime mapping the island's old fortifications. Later in his career he would be awarded the Croix de la Légion d'Honneur for his work repairing fortifications at Lyons. He returned to Switzerland in 1817, and to become commander of the Canton of Geneva's military engineers, as well becoming professor of mathematics at the University of Geneva. He continued to rise through the ranks and in 1831 was appointed quartermaster-general. In that capacity he was in 1833 commissioned to execute a trigonometrical survey of Switzerland. The final result of this monumental work, printed to 25 sheets on the scale of 1⁄100000, was published between 1842 and 1865. The Dufourspitze (the highest mountain peak in Switzerland) is named in honor of Dufour's cartographic achievements.