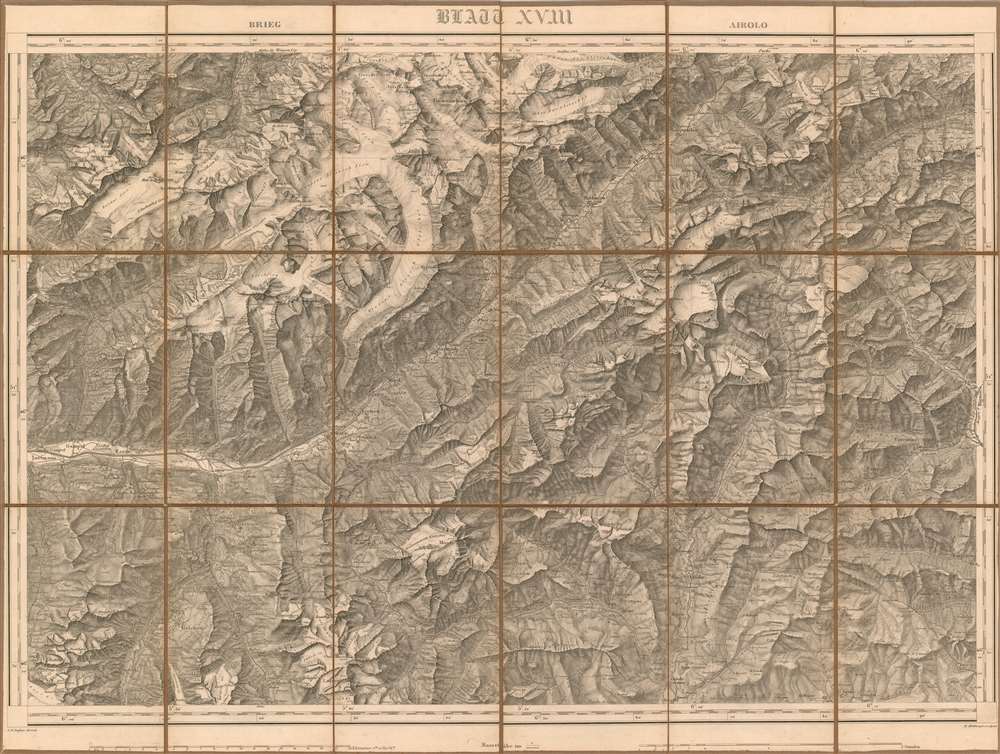 The Valais mapped during the first geometrically accurate survey of Switzerland.
$250.00

This superbly detailed 1844 Dufour map of the municipalities of Brig-Glis and Airolo in the Lepontine Alps of Switzerland, from the first geometrically accurate map of the Swiss Confederation; this example is an 1875 revision of the map. It spans from the canton of Vaud to the canton of Valais. The eastern portion of Lac Léman is shown; much of the map shows the Rotten river valley, or the upper Rhone, showing the cities of Sierre, Sion, and Ridde.

This Brig-Airolo map is sheet 18 of Guillaume Henri Dufour’s monumental, twenty-five sheet topographical map of Switzerland. The Dufour map was the first geometrically accurate depiction of the recently formed Swiss confederation . Work was initiated on the 1:100000 topographic map of Switzerland in 1832; the twenty-five sheets - each covering an area of 70 by 48 kilometers - were published serially between 1845 and 1865.

Dufour oversaw the work of numerous scientists, topographers and engravers in order to achieve this masterpiece. Between 1834 and 1837 geodesist Johannes Eschmann compiled existing cantonal networks to form a ‘Triangulation primordiale,’ the first modern nationwide triangulation spanning Switzerland from the north to the south; these provided the geodetic reference system which formed the framework for the Dufour Map. Simultaneously, Dufour enlisted a team of surveyors to supply topographic data. In order to organize the efforts of so many - from survey to engraving - Dufour founded the Federal Topographical Bureau in Geneva in 1838.

The surveys were executed at a very high resolution, ranging from 1:50000 in alpine areas to 1:25000 in the Central Plateau, Jura and Southern Ticino areas; these were integrated into Eschmann’s framework before surveys could even begin. While Dufour specified that his surveyors should do so ‘as accurately as possible’ it should be noted that there existed at the time no quantifiable standard for such accuracy to which to refer. In spite of this, analysis of the Dufour maps reveal a mean deviation of only 153 metres - a mere 1.5 millimeters on the map!

A Pinnacle of the Engravers’ Art

After the original surveys were examined, they were then reached to the scale of 1:100,000 for uniformity, then transferred to copperplate, engraved, and printed. The Dufour maps are justifiably held in regard for the quality of their engraving, particularly in the presentation of Switzerland’s wildly varied terrain. The maps’ beautiful shading resulted in their distinctive three-dimensional effect. During a period in which the mapmaker’s art was increasingly moving to lithography, the execution of these maps in copperplate represents a triumph of the cartographic medium dominant from the 16th century on. The map’s quality was hailed from its production: the 1875 journal XXXX, reporting the cartographic offerings of that year’s Geographical Congress at Paris, set it above the pack:

Switzerland, though one of the smallest countries in Europe, nevertheless holds a foremost rank in this exhibition. The large Federal map, produced under the direction of General Dufour, - of whose recent decease we are reminded by the crepe ceiling the Swiss coat-of-arms, - is certainly one of the finest specimens of cartography in a large scale to be seen here. A comparison of it with the Swiss atlas surveyed 1786-1802 by Weiss, a copy of which is exhibited, forcibly brings home to us the great strides which the art of cartography has made since then.

The first sheets of the Dufour map were published in 1845 with the project culminating in 1865; it can be presumed that the individual maps were published in multiple editions in the intervening period. Nevertheless, we see only six examples of this separate sheet in institutional collections, and we do not see it on the market. The complete set is reasonably well represented in institutional collections.

Very good condition. Dissected and mounted on linen as issued. Some mended separations in linen not affecting surface of map.