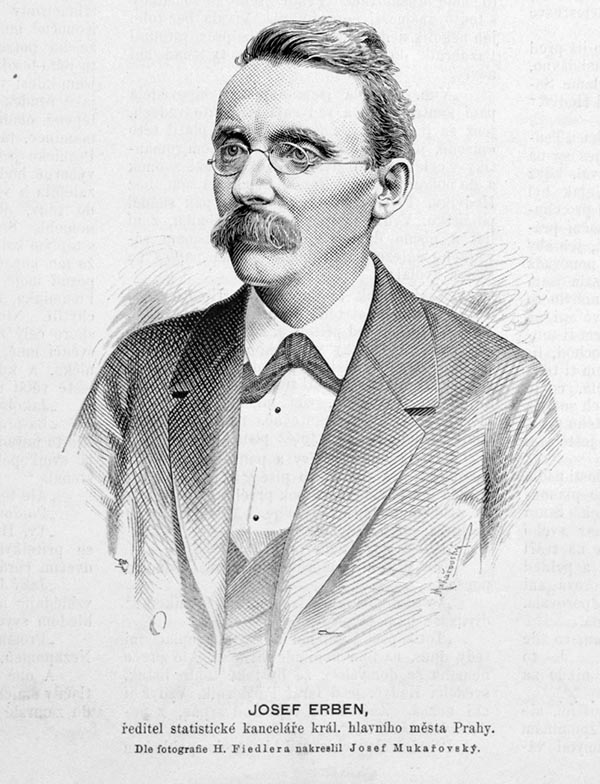 Josef Erben (April 29, 1830 - April 11, 1910) was Czech educator, cartographer, and academic. Erben was born in Kostelec nad Orlicí, Czechia, then under the Austrian Empire. He received his secondary education at grammar schools in Rychnov nad Kněžnou (1843 - 1844) and in Broumov (1841- 1842, 1845 - 1846). He then enrolled at the Faculty of Philosophy in Prague, where he was a full-time student from 1847 to 1850 and an extraordinary student in the school year 1852/53. In this same year, he transferred to the Czech Technical University in Prague. Between 1862 and 1875 he was a docent for statistics at the polytechnical institute. In 1865 he became the curator of the map department of maps in the National Museum. He corresponded widely in cartographic circles and maintained relationships with many prominent European cartographers and publishers. As it was a period of national social and cultural revival, Erben began publishing his own maps in the 1860s. At the time, it was traditional to print maps of Bohemia in German, Erban was the first to publish exclusively in Czech. As such he had to invent contemporary terminology in Czech. Erben’s terminology was highly influential on other Slavic countries, where they embraced the newly invented Slavic terms as the basis for their own terminology. He died in Prague in April of 1910, aged 79.