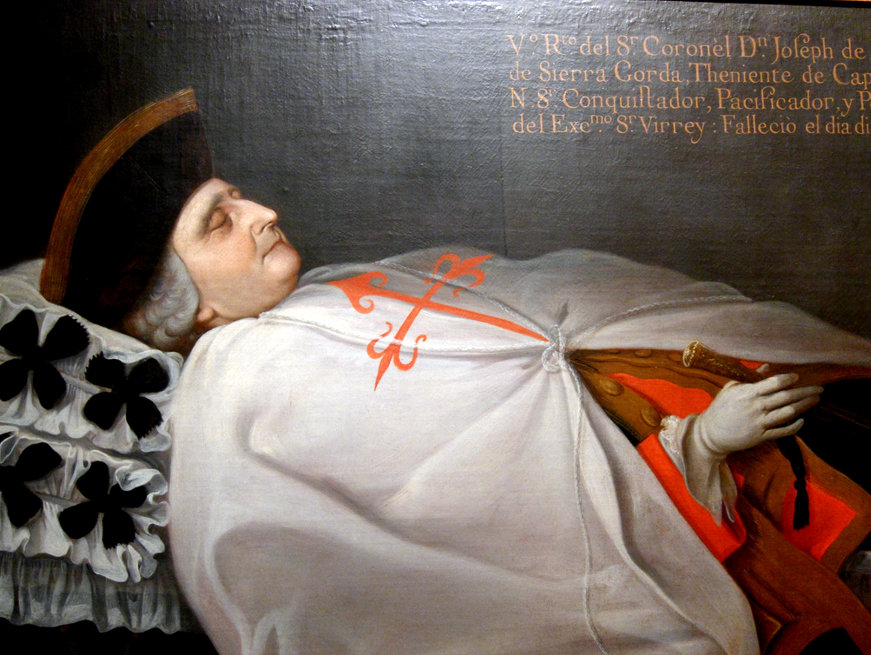 José de Escandón, conde de Sierra (May 19, 1700 - 1770) was a Spanish soldier, slaver, and the founder and first governor of the colony of Nuevo Santander, (extending from Veracruz to the Guadalupe River in Texas.) Born in Spain, Escandón arrived in New Spain in 1715. Joining the military at an early age, he fought against the English but his campaigns were predominantly against Native Americans: his wars were against the Apaches and the Pames (indeed, he was known as 'Exterminator of the Pames of Querétaron') 1732 he subdued rebelling miners at the Guanajuato silver mines, and was promoted to sergeant mayor of the regiment. In 1732 and 1733 he subdued rebels at the silver mines in Guanajuato and Irapuato. In 1734 he put down a Native American rebellion of 10,000 at San Miguel el Grande. His efforts won him a colonelcy. The War of Jenkins' Ear Brough him to Veracruz in 1742, but by the time he arrived the conflict had largely blown over. In 1749 he returned to quelling revolts of famine-stricken Indian populations. During this period, he visited the missions in the Sierra Gorda, introducing reforms in their administration, while also fighting the Tamaulipecos of Nuevo León. In order to impede the spread of French and English in the North, Spain determined that Mexico's gulf coast should be fully conquered and colonized. José de Escandón was chosen to execute these efforts, having already undertaken an expedition to the region and produced a fair map of the territory, which he proposed to name 'Nuevo Santander.' Between 1748 and 1755, he founded more than twenty settlements and many missions in the colony. As governor of the new colony, he earned infamy, garnering accusations of murdering and enslaving the indigenous population of the colony (to his great enrichment,) using Indian labor in his textile mills, and permitting the use of the port of Santander to smuggle English contraband. In spite of these horrors, he had been considered one of the great statesmen of New Spain in the eighteenth century, exercising extraordinary auctocratic power in assigning activities and crops to each settlement. A great builder, he saw the erection of a mansion and a church at Santander, a reservoir, kilns, sugar mills and flour mills. It can be assumed that were there trains, he would have made them run on time. He died a virtual unknown in 1770, his crimes having caught up with him (although he was posthumously exonerated and rehabilitated, probably in order to prevent his son's loss of title.