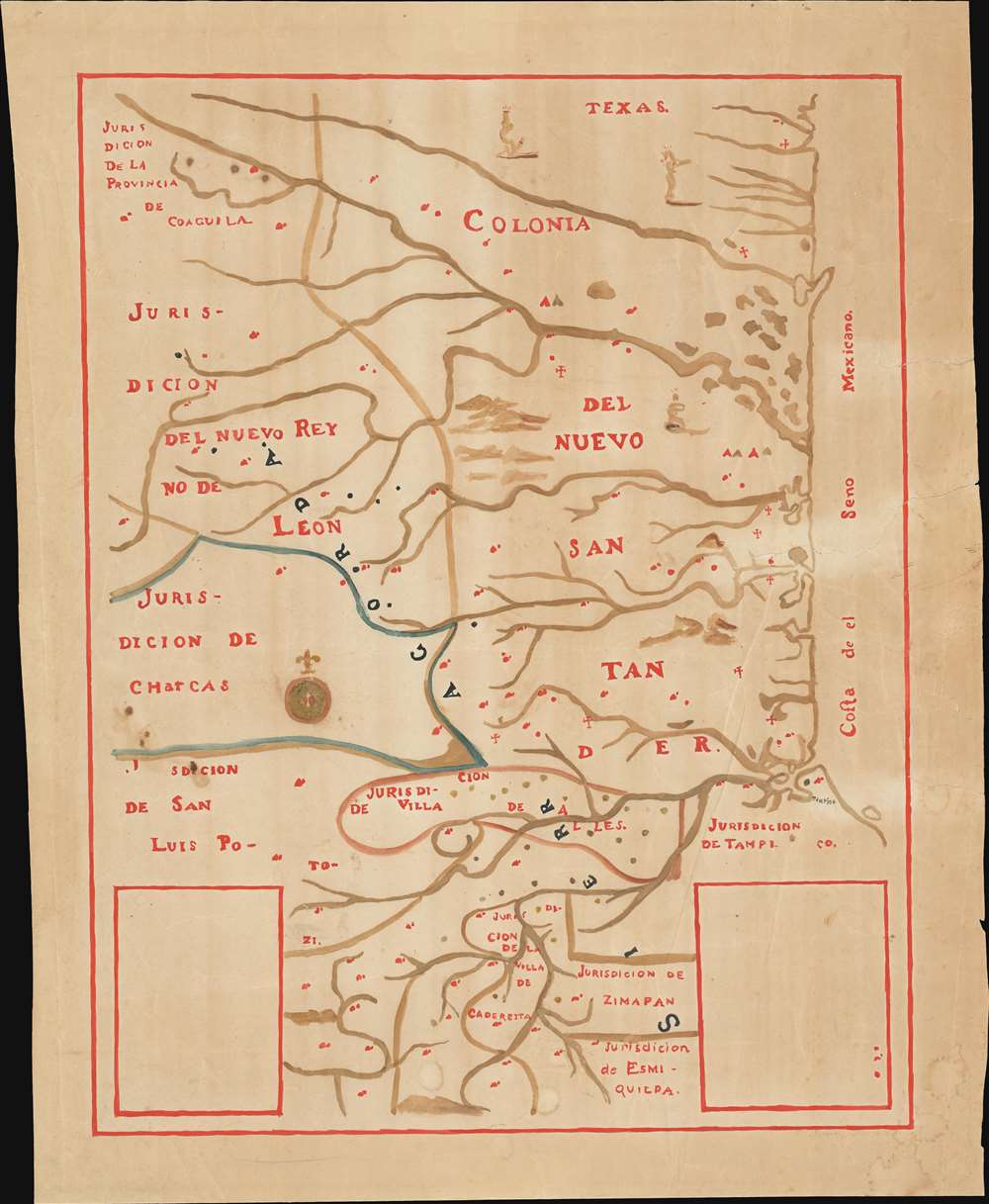 A painstaking copy of a seminal map, possibly a printers' draft.
$750.00

This is a 1929 Talleres Graficos de la Nacion hybrid litho-manuscript map (hand-colored within a faint printed border) of an important and (in its original form) unobtainable document in the history of Colonial-era Mexico - the José de Escandón Mapa de la Sierra Gorda.

This is a map of the Colonia del Nuevo Santander and its neighboring provinces, an area now encompassing the Mexican state of Tamaulipas, part of the state of Veracruz, and parts of Texas as far north as San Antonio Bay. It maps the coast, the area's rivers, and labels the surrounding provinces or 'Jurisdictions.' While cities and missions are not yet named on this copy, markings corresponding to these do appear on the original map.

In the first half of the 18th century, the northeastern parts of New Spain had not been heavily colonized. Alarmed by the increasing influence of the French and English in the North, Spain decided to fully conquer and colonize the borderland, appointing José de Escandón governor. As part of his proposal, Escandón undertook an expedition and produced a map of the territory, which he proposed to name 'Nuevo Santander.' That map, drawn in or around 1747 now resides Archivo General de Indias, Seville, Spain. The map - which covers the northeast provinces of Nuevo Santander, Coahuila, Nuevo León, San Luis Potosí, Querétaro, and parts of Texas - illustrates 23 towns, Native American settlements, and a number of missions. Its text and its map symbols were copied faithfully in later iterations, even as they updated the map to show new settlements, and roads.

For our purposes, the most important copy of the map has been preserved in a manuscript collection of historical documents entitled Monumentos para la historia de Coahuila y seno Mexicano within Archivo General de la Nación. This example has been dated to 1792. Visually, its bright colors set it apart from its predecessors. Its red borders, provincial lettering, and markings for cities and missions match the color used in our printed example. It is fortunate that the artist chose to start with that color, as it clearly identifies the source absent the text upon which we would otherwise rely. Also, digitized examples of the 1792 map show infilled damage to the paper affecting the text in the area of 'Jurisdicion De San Luis Potozi,' causing the loss of some text from the word 'Jurisdicion.' Our example's text preserves this omission (the relevant word reads 'J___sdicion,' matching the surviving text of the original.

The present, undated map is a painstaking copy of the 1792 manuscript. The border of the map appears to have been faintly printed - its printed line is just visible; the Talleres Graficos de la Nacion imprint appears faintly in the lower right corner. The colored lettering, rivers, and outlines are applied by hand, in an effort to reproduce the original. In red, the border, legend boxes, and lettering has been completed, including the red portions of the markings corresponding to missions, villages, and Indigenous settlements. Green and brown watercolors have been applied, roughing in rivers, provincial borders, shading for mountains and shading for the native figures illustrating the map. Likewise, the color for the compass rose has been applied. Unfortunately, at some point after the completion of the black lettering for 'Sierra Gorda,' labor on this map ceased: thus the black text place names and symbols, river and mountain outlining, figure drawing, and the text in the legend boxes are all absent, barring the lone 'Tampico.' We are given no clue as to the purpose of this work: whether it is a copy of the 1929 lithograph executed by a student within a skeleton provided by the publisher, or whether this represented an in-house Talleres Graficos draft of the color passes for the printing of the 1929 litho. We are dating this work tentatively at 1929, the date corresponding to the Talleres Graficos edition of the complete map.

This map, first executed in 1747, was never intended for print, and survived only in manuscript examples produced over the course of the 18th century and into the 19th. No print examples were produced until lithographic facsimiles were executed in the 20th century, first by the Mexican government in 1929 and later by the Texas GLO. We have seen no other hybrid litho/manuscript examples of this map either on the market or in institutional collections.