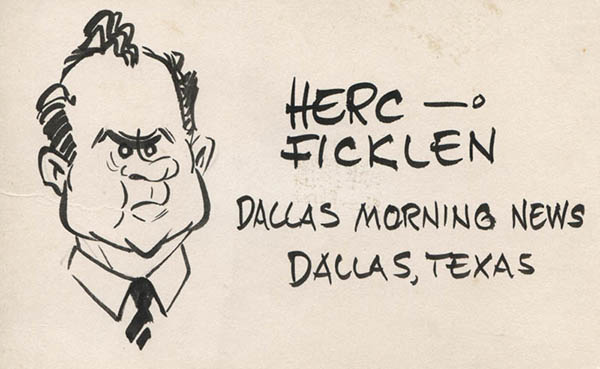 Jack Howells 'Herc' Ficklen (April 19, 1911 - October 20, 1980) was an American commercial illustrator, cartoonist, and newspaperman active in Dallas, Texas throughout the 20th century. He is considered one of the forefathers of American editorial cartooning. Herc was born in Waco, Texas and matriculated at the Peacock Military Academy in 1930. Graduating, he worked for six years as a copy by at the Dallas Morning News before being promoted to the art department in 1934. He was given his first regular cartoon in 1973. He served in the U.S. Army from 1940 to 1945 - during World War II. After the war, he returned to the news, where he was a regular contributor for more than 30 years. In the 1950s and 60s, he also drew freelance cartoons for 'Humorama' a racy digest featuring 'girlie' cartoons. Herc's later work is distinguished by the inclusion of 'Little Longhorn', a comically illustrated Texas Longhorn steer and his signature 'dingbat'. Herc also ran his own one-man syndicate, Avalon Features until his death in 1980.