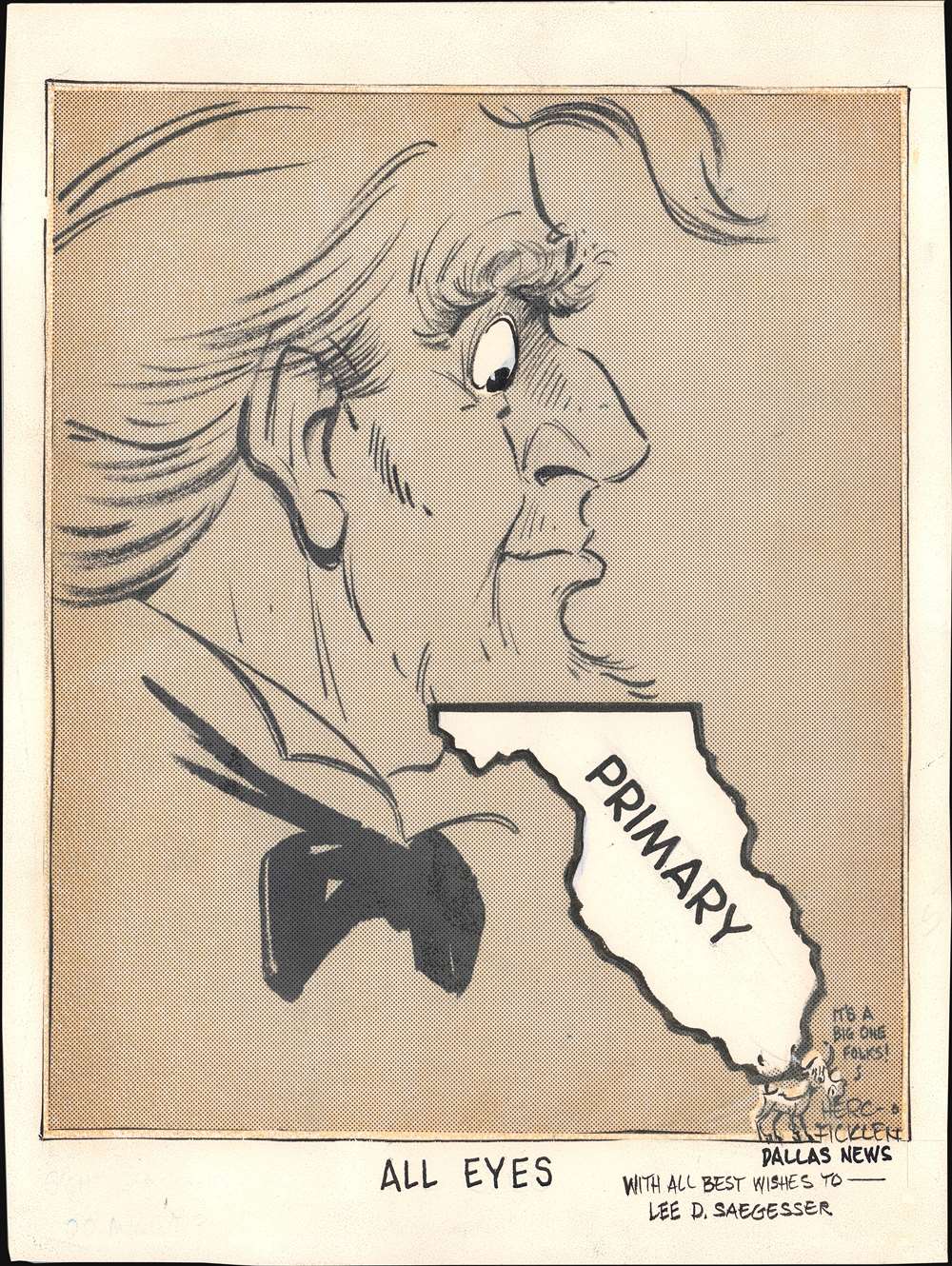 An original manuscript storyboard political cartoon by Jack Howells 'Herc' Ficklen satirizing national interest in the 1972 Democratic National Convention, held in Miami, Florida. The cartoon depicts Uncle Sam, representing the United States, looking downward at his beard - Florida. The cartoon features 'Little Longhorn', Ficklen's signature 'dingbat' introduced in 1971. The cartoon, entitled 'All Eyes' ran in the Dallas News in July of 1972. The carton bears a dedicated to Lee D. Saegesser. The famous NASA archivist and historian, suggesting it was presented to him as a gift from Ficklen, possibly due to its Florida focus.

The 1972 Democratic Convention, held in Miami Florida, was one of the most significant in the history of American electioneering - when this cartoon was issued the eyes of the country were indeed on Florida. It was the first democratic convention to introduce new rules on delegate selection. These included quorum requirements for meetings, and quotas for women and minority groups. The convention also established much of the Democratic agenda that remains with us today, including equal rights, universal guaranteed income, anti-war policies, and more. In addition, it was the first campaign where an African American Woman, Shirley Chisholm (1924 - 2005) ran for president. While George McGovern ultimately received the nomination, Chisholm came in a strong 4th, strongly ahead of political mainstays like Ted Kennedy and Walter Mondale. McGovern lost the national election to Richard Nixon by largest landslide in any US Presidential election.

This is the original artwork for a political cartoon that ran in the Dallas News in 1972, during the Miami, Florida, democratic National Convention. As original artwork, it is the only known example.

Jack Howells 'Herc' Ficklen (April 19, 1911 - October 20, 1980) was an American commercial illustrator, cartoonist, and newspaperman active in Dallas, Texas throughout the 20th century. He is considered one of the forefathers of American editorial cartooning. Herc was born in Waco, Texas and matriculated at the Peacock Military Academy in 1930. Graduating, he worked for six years as a copy by at the Dallas Morning News before being promoted to the art department in 1934. He was given his first regular cartoon in 1973. He served in the U.S. Army from 1940 to 1945 - during World War II. After the war, he returned to the news, where he was a regular contributor for more than 30 years. In the 1950s and 60s, he also drew freelance cartoons for 'Humorama' a racy digest featuring 'girlie' cartoons. Herc's later work is distinguished by the inclusion of 'Little Longhorn', a comically illustrated Texas Longhorn steer and his signature 'dingbat'. Herc also ran his own one-man syndicate, Avalon Features until his death in 1980. Learn More...

Very good. Manuscript and pastedown on art-board.
Looking for a high-resolution scan of this?