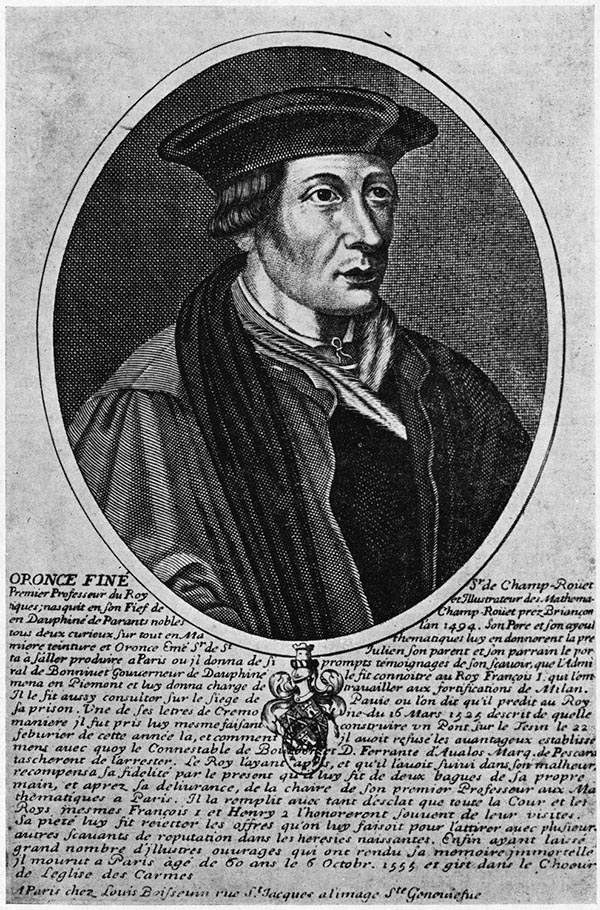 Oronce Finé (December 20, 1494 - August 8, 1555), also known as Orontius Finnaeus, was a French astronomer, astrologer, mathematician, and cartographer active in Paris in the first half of the 16th century. Finé was born in Briançon, the son and grandson of prominent physicians. He was educated in Paris at the Collège de Navarre, where in1522 he was awarded a medical degree. As a young man he became involved with judicial astrology, a pseudoscience that involved predicting future events based upon complex mathematical calculations derived from careful observations of planetary and stellar bodies. This practice was declared heretical by the catholic church and led to Finé's temporary arrest and imprisonment in 1524. Nonetheless by 1531 he was appointed to the chair of mathematics at the Collège Royal (the present Collège de France), founded by King Francis I. This was a position he would retain throughout his life. Finé became one of the most prolific authors of mathematical books of his age. He worked in a wide range of mathematical fields, including practical geometry, arithmetic, optics, gnomonics, astronomy, and instrumentalism. In cartography, Finé is known for several maps, including a revolutionary 1525 map of France. Significantly, he introduced the cordiform (heart-shaped) projection model in an attempt to address the curvature of the Earth on a two-dimensional plane. Finé issued two cordiform world maps, a single heart-shaped map representing the known world, and a double cordiform projection detailing expanding from the north and south polar regions. His work was both revolutionary and widely copied in the subsequent century. Finé died in Paris at 60. The lunar crater Orontius and Finaeus Cove in Antarctica are named after him. In 2014, a square named after Oronce Fine was inaugurated in Paris.