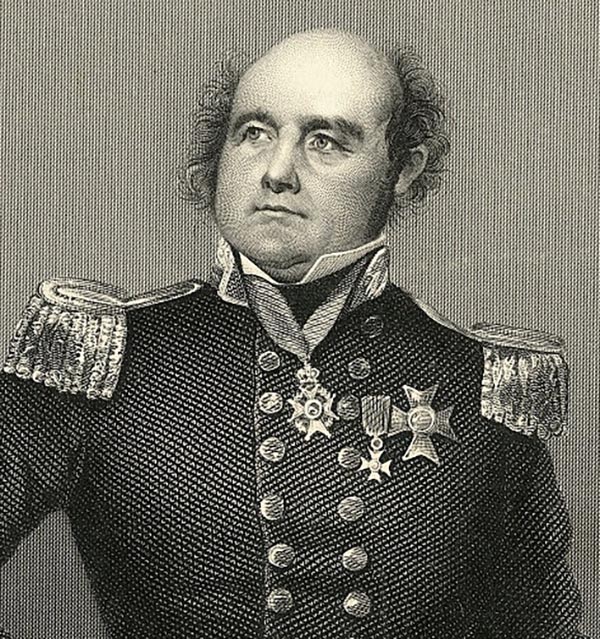 Sir John Franklin (April 16, 1786 - June 11, 1847) was a British Arctic explorer and an officer in the Royal Navy. Born in Spilsby, Lincolnshire, Franklin was the ninth of twelve children. Educated at a grammar school in Louth, Franklin soo developed an interest in a career at sea, although his father wanted him to either become a businessman or enter the clergy. Somehow, Franklin convinced his father to let him embark on a trial voyage aboard a merchant ship at the age of twelve, which only confirmed his wishes. So, his father secured him a Royal Navy appointment aboard the HMS Polyphemus in March 1800. Franklin joined the Polyphemus in the fall of 1800, and was aboard during the Battle of Copenhagen in the following year, when the Polyphemus was part of Horatio Nelson's squadron. Franklin was then transferred to the HMS Investigator, and embarked on an expedition to Australia as a midshipman. He fought in several other battles during the Napoleonic Wars, and was even present at the Battle of Trafalgar in 1805 aboard the HMS Bellerophon. He was wounded at the Battle of Lake Borgne during the War of 1812. Franklin's first command was the HMS Trent in 1818. Franklin led the ill-fated Coppermine Expedition between 1819 and 1822, which saw the death of 11 of the 22 members of the team. Franklin returned to England in 1823 and married Eleanor Anne Porden, and the couple had a daughter the following year, also named Eleanor. His wife Eleanor died of tuberculosis in 1825. He led the Canadian Mackenzie River expedition in 1825, which was much more successful than the disastrous Coppermine expedition. He remarried on November 5, 1828, to Jane Griffin. Franklin then served as Lieutenant Governor of Van Diemen's Land (Tasmania) from 1837 until he was removed from office in 1843. After leaving Van Diemen's Land, Franklin was named commander of yet another Arctic expedition, his fourth. This expedition, meant to complete the charting of the Northwest Passage, is now known as Franklin's lost expedition, because Franklin and all the men on his team either died or disappeared.