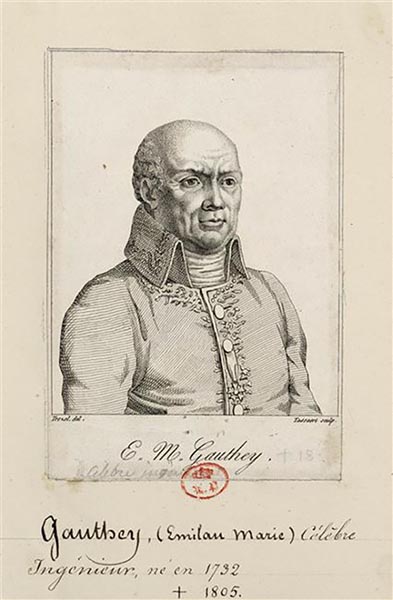 Émiland Marie Gauthey (December 3, 1732 – July 14, 1806) was a French mathematician, cartographer, civil engineer and architect active in the États de Bourgogne (Burgundy), France. Gauthey was born at Chalon-sur-Saône to a family of the lower bourgeois. He studied at the Chalon Jesuit college before transferring to Versailles to study under his uncle who was a Professor of Mathematics at the École des Pages du Roi. Later he apprenticed under the important French architect Gabriel Dumont before taking a post as deputy engineer in his hometown of Chalon-sur-Saône. He retained the position for some 25 years before being promoted, on his predecessor death, to Directeur Général des Danaux de Bourgogne. During the course of his long civil service career he completed a number of important civil works projects throughout Burgundy. The Canal du Centre or Canal du Charolais, between Digion and Chalon-sur-Saône, is considered his master work, and, some believe, one of the greatest public works of the 19th century. This significant work, essentially created an inland water route connecting the English Channel to the Mediterranean Sea via the and Saone Rivers. After the French Revolution he relocated to Paris where to continue his civil service work as a member of the Conseil Général des Ponts et Chaussées. He received the Legion of Honor on its first issue in 1804. He died suddenly in Paris on July 14 of 1806.