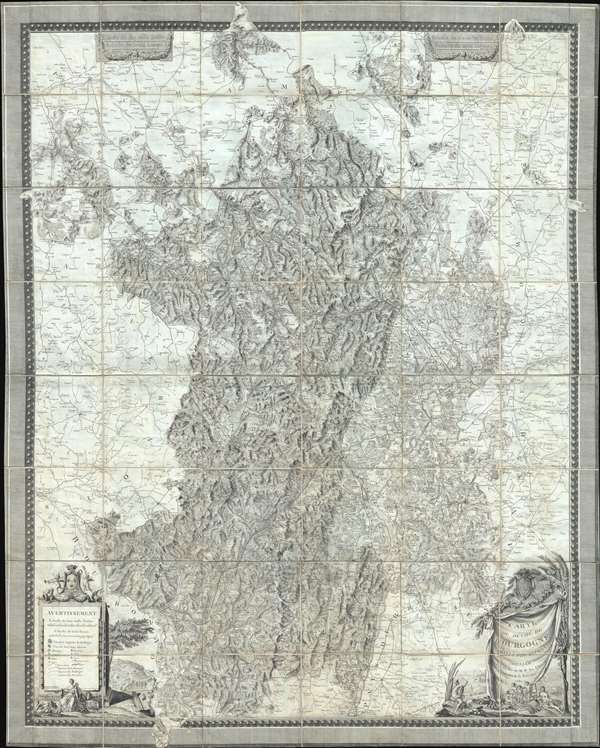 An utterly stunning large format 1782 wall map of the Burgundy (Bourgone) wine region of France. Prepared for provincial administrative purpose, this map covers the full Burgundy region known for producing some of the world's greatest wines from the Champagne region just north of Dijon to Macon, including the Mâconnais, Côte Chalonnaise, Côte de Beaune, Côte de Nuits, and in the upper left, the Chablis region around Auxerre. The detail throughout is astounding, with countless individual towns, villages, and chateaux, often with their planned gardens, noted. Monnier's illustration of topography is similarly spectacular, with meticulous shading used to represented hills, mountains, and river valleys.

This map was compiled for administrative purposes on the order of the provincial government and printed in Dijon, France. It was drawn by François Pourcher (17?? - 1786) under the direction of Émiland Marie Gauthey (1732- 1806). It was engraved by Louis-Gabriel Monnier (1733 - 1804). Only a single example of this map appears on the OCLC, that being located in the Bibliothèque Nationale de France. We are aware of at least two states, the present example, with engraved borders, and another example issued without the borderwork.

Émiland Marie Gauthey (December 3, 1732 – July 14, 1806) was a French mathematician, cartographer, civil engineer and architect active in the États de Bourgogne (Burgundy), France. Gauthey was born at Chalon-sur-Saône to a family of the lower bourgeois. He studied at the Chalon Jesuit college before transferring to Versailles to study under his uncle who was a Professor of Mathematics at the École des Pages du Roi. Later he apprenticed under the important French architect Gabriel Dumont before taking a post as deputy engineer in his hometown of Chalon-sur-Saône. He retained the position for some 25 years before being promoted, on his predecessor death, to Directeur Général des Danaux de Bourgogne. During the course of his long civil service career he completed a number of important civil works projects throughout Burgundy. The Canal du Centre or Canal du Charolais, between Digion and Chalon-sur-Saône, is considered his master work, and, some believe, one of the greatest public works of the 19th century. This significant work, essentially created an inland water route connecting the English Channel to the Mediterranean Sea via the and Saone Rivers. After the French Revolution he relocated to Paris where to continue his civil service work as a member of the Conseil Général des Ponts et Chaussées. He received the Legion of Honor on its first issue in 1804. He died suddenly in Paris on July 14 of 1806.


François Pourcher (17?? - 1786) was a French draughtsman and engraver, the nephew of Burgundian civil engineer Émiland Marie Gauthey. Pourcher studied at the Academie de Dessin de Dijon, where is work won two first prices. Later he served as Sub-Engineer for the state of Burgundy and was the official inspector of the Charolais Canal. Most of Pourcher's published maps focus on the Burgundy region.


Louis-Gabriel Monnier (1733 - 1804) was a French engraver who also worked in numismatics. Monnier was born in Besançon, France and died in Dijon. He was a member of the Academy of Dijon and the first conservator at the Museum of Fine Arts in Dijon (Musée de beaux-arts de Dijon). Today, he is known as a map engraver, a coin engraver, and an illustrator. His most notable works are the vignettes for L'Histoire de Bourgogne.

Very good. Dissected and mounted on linen. Some of the linen has been reinforced on verso, so the map presents beautifully, but does not easily fold to its original size.