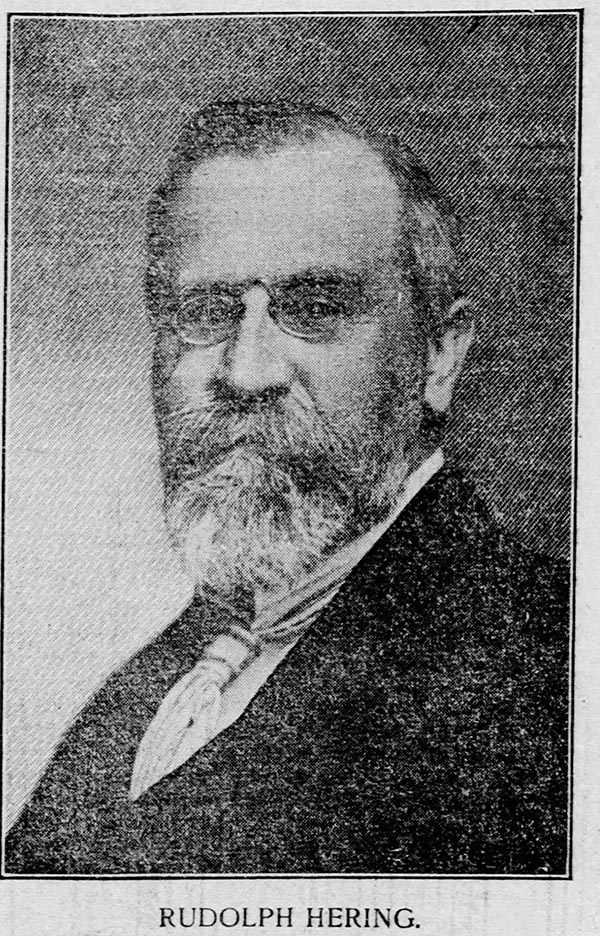 Rudolph Hering (February 26, 1847 - May 30, 1923) was an American civil engineer, sanitary engineer, and the 'Dean of Sanitary Engineering' in the United States. Born in Philadelphia, Pennsylvania, Hering was sent to Dresden, Germany, in 1860, where he attended a public high school and then the Royal Saxon Polytechnic Institute. He graduated from the Polytechnic Institute in 1867 as a civil engineer. He returned to the United States and found work as an engineer at Prospect Park, Brooklyn and then assisted in laying out Fairmont Park in Philadelphia. After several severe yellow fever epidemics in major cities across the United States, the National Board of Health commissioned Hering to study sewerage practice in major European cities. After returning from Europe, Hering penned what was considered at the time one of the most important reports published in the United States concerning the 'fundamental principles and arrangements of structures for satisfactory removal of household wastes by water carriage'. Between 1882 and 1888 Hering worked on major projects in Philadelphia, Chicago, and New York City. Over the course of his career, he worked on water supply investigations in New York, Philadelphia, Washington, New Orleans, Minneapolis, Columbus, Montreal, and numerous other cities. In 1889 President Harrison appointed him as Chairman of a Commission to develop a program of sewerage improvement for Washington, D.C. He was married twice. His first wife was Fanny Field Gregory, with whom he had two children. Hermine Buchheim was his second wife and they had three children.