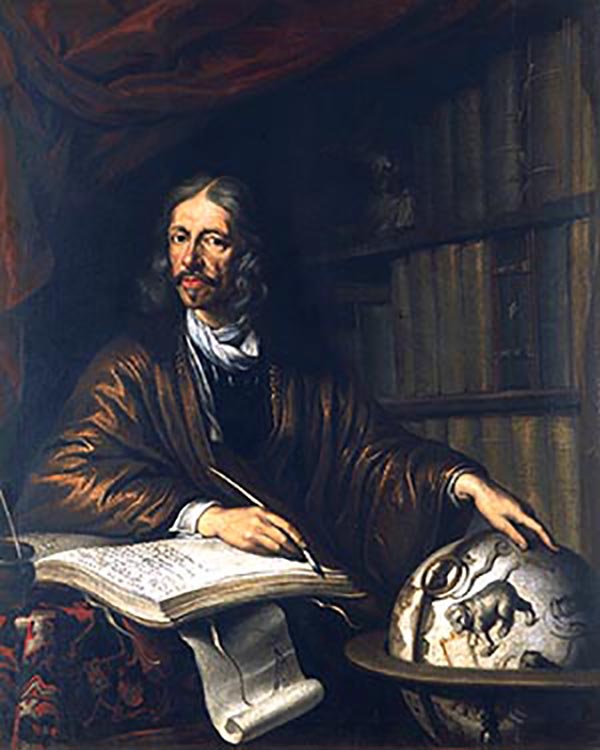 Johannes Hevelius (January 28, 1611 - January 28, 1687) was a Polish politician, brewer, and astronomer. Hevelius was born into a prominent Danzig brewing family of Bohemian origins. Supported by Jopenbier fortunes Hevelius received an excellent education at the hands astronomer and polymath Peter Cruger. Following his primary education Hevelius moved to Leiden where he studied law and befriended such luminaries as Pierre Gassendi, Marin Marsenne, and Athanasius Kircher. On his return to Danzig he married his neighbor Katharine Rebeschke. Hevelius had a lifelong interest in politics, which, along with his family name, eventually earned him a number of important positions including councilor and mayor of Danzig. Nonetheless, his most significant achievements were in astronomy. Hevelius is considered "the founder of lunar toography". His important book, Selenographia, sive Lunae descriptio laid the foundations for lunar cartography that are still in general use today. Hevelius established the conventions of naming lunar landforms after terrestrial features such as seas and political regions. He also formalized the idea of presenting the moon from a singular temporal perspective - in his case, the morning, though modern lunar maps tend to use evening light. In addition to his lunar work, Hevelius named a number of constellations that are still recognized today - including the sextant. Though known to have owned the world's largest tubular telescope, a monster of some 45 meters, Hevelius did most of his astronomical observations with a sextant and, as such, is considered one of the last astronomers to work without a telescope. His second wife, Elisabeth Koopmann, assisted in much of Hevelius' research and actually published two astronomical texts after Hevelius' 1687 death, marking her as the world's first female astronomer.