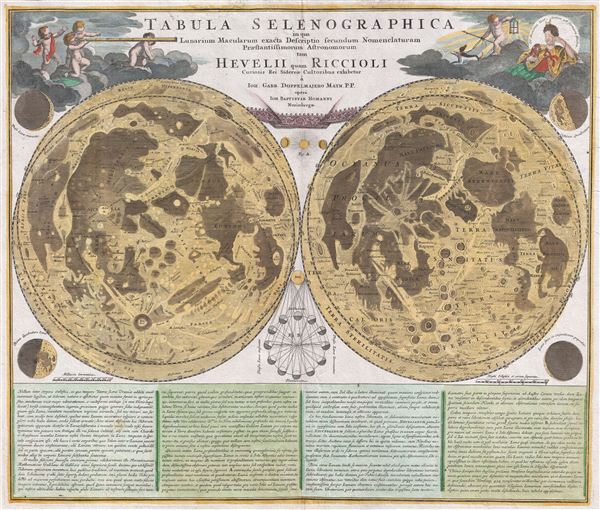 The first comparative chart of the Moon.

The left hand lunar map, composed by Hevelius, is a considered a foundational map in the science of selenography – or lunar cartography. This map first appeared in Hevelius' 1647 work Selenographia which laid the groundwork for most subsequent lunar cartographic studies. Here the moon is presented as it can never be seen from Earth, at a greater than 360 degrees and with all visible features given equal weight. In this map Hevelius also establishes the convention of mapping the lunar surface as if illuminated from a single source – in this case morning light. The naming conventions he set forth, which associate lunar features with terrestrial locations such as 'Asia Minor,' 'Persia,' 'Sicilia,' and etcetera were popular until the middle of the 18th century when Riccioli's nomenclature took precedence.

The Riccioli map, on the right, is more properly known as the Riccioli-Grimaldi map, for the fellow Jesuit Francesco Grimaldi with whom Riccioli composed the chart. This map first appeared in Riccioli and Grimaldi's 1651 Almagestum Novum. This was a significant lunar chart and offered an entirely new nomenclature which, for the most part, is still in use today. Curiously, though Riccioli, as a devout Jesuit, composed several treatises denouncing Copernican theory, he chose to name one of the Moon's most notable features after the astronomer – perhaps suggesting that he was a secret Copernicus sympathizer? Other well-known lunar features named by Riccioli include the Sea of Tranquility where Apollo 11 landed and where Neil Armstrong became the first human to set foot on the moon's surface.


Johannes Hevelius (January 28, 1611 - January 28, 1687) was a Polish politician, brewer, and astronomer. Hevelius was born into a prominent Danzig brewing family of Bohemian origins. Supported by Jopenbier fortunes Hevelius received an excellent education at the hands astronomer and polymath Peter Cruger. Following his primary education Hevelius moved to Leiden where he studied law and befriended such luminaries as Pierre Gassendi, Marin Marsenne, and Athanasius Kircher. On his return to Danzig he married his neighbor Katharine Rebeschke. Hevelius had a lifelong interest in politics, which, along with his family name, eventually earned him a number of important positions including councilor and mayor of Danzig. Nonetheless, his most significant achievements were in astronomy. Hevelius is considered "the founder of lunar toography". His important book, Selenographia, sive Lunae descriptio laid the foundations for lunar cartography that are still in general use today. Hevelius established the conventions of naming lunar landforms after terrestrial features such as seas and political regions. He also formalized the idea of presenting the moon from a singular temporal perspective - in his case, the morning, though modern lunar maps tend to use evening light. In addition to his lunar work, Hevelius named a number of constellations that are still recognized today - including the sextant. Though known to have owned the world's largest tubular telescope, a monster of some 45 meters, Hevelius did most of his astronomical observations with a sextant and, as such, is considered one of the last astronomers to work without a telescope. His second wife, Elisabeth Koopmann, assisted in much of Hevelius' research and actually published two astronomical texts after Hevelius' 1687 death, marking her as the world's first female astronomer. Learn More...


Giovanni Battista Riccioli (April 17, 1598 - June 25, 1671) was a Jesuit priest and astronomer active in Italy and Bologna during the early 17th century. Riccioli is most famous as the first person to accurately measure the rate of acceleration of a free falling body. However, his most substantial work is the Lunar measurement and mapping that he completed with Francesco Maria Grimaldi. Riccioli and Grimaldi's map of the moon established many of the planetary and lunar mapping conventions that are still in effect today including the nomenclature for most lunar topography. As a Jesuit and in much of his work, most specifically the 1651 Almagestum Novum which was written to that purpose, Riccioli expresses a clear rejection of Copernicus's heliocentric theories. Which makes it all the more curious that he chose to name one of the Moon's most prominent craters after the great Astronomer. Perhaps a tacit sympathy for Copernican theory? Riccioli died in Bologna in 1671. Learn More...