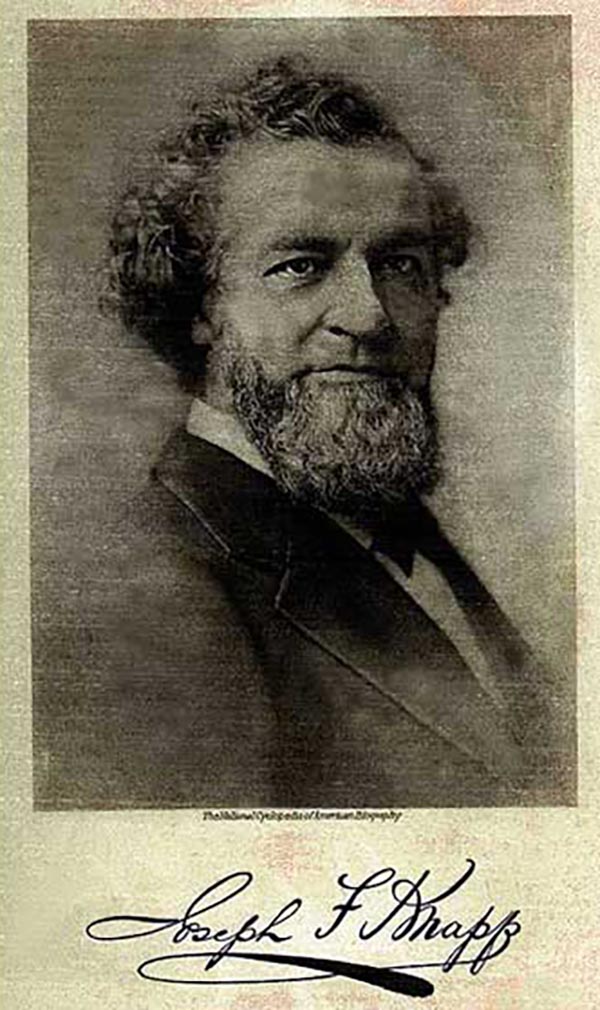 Joseph Fairchild Knapp (July 1, 1832 - September 14, 1891) was an American printer and publisher active in the second half of the 19th century. From the age of 16, Knapp apprenticed as a lithographer under Napoleon Sarony (1821 - 1896) and Henry B. Major (18?? - 18??), at the firm of 'Sarony and Major.' Henry Major either died or left the firm around 1853, with, possibly, his shares being held in reserve for his son, who was then still an apprentice, Richard C. Major. In 1857, Sarony left the firm to travel and study in Europe, Knapp and Richard Major took over the firm, becoming partners, renaming the business 'Sarony, Major and Knapp' (1857 - 1863). It is unclear why Sarony's name was maintained, possibly to capitalize on his fame, as a honorific, or possibly because he owned a major stake. Nonetheless, in 1863, Sarony, who had been absent for 7 years, was pushed out of the company which was was renamed 'Major and Knapp.' They published under this imprint from various locations over the years: 449 Broadway (1864 - 1866), 71 Broadway (1867 - 1872), and 56 Park Place (1889 - 1892). Richard Major retired in 1888, and the firm was renamed Knapp and Company. The firm grew to become one of the largest lithographic presses in the United States and a major force in American printing. Knapp invested some of his considerable wealth into insurance concerns. In 1868, he was the largest shareholder and director, and chairman of the Metropolitan Insurance Company. He became president of the Metropolitan Insurance Company in 1871, pioneering the idea of the low-cost life insurance policy, propelling MIC to become one of the largest insurers in the United States. All the time, he also continued to operate and manage his printing business, which he passed on to this son Joseph Palmer Knapp (1864 - 1951). Palmer Knapp closed 'Knapp and Company' in 1982, a year after his father's death, to establish the American Lithographic Company, which consolidated various smaller printers under a new imprint. Knapp constructed a large and elegant mansion in Brooklyn, which stood at 554 Bedford Avenue.