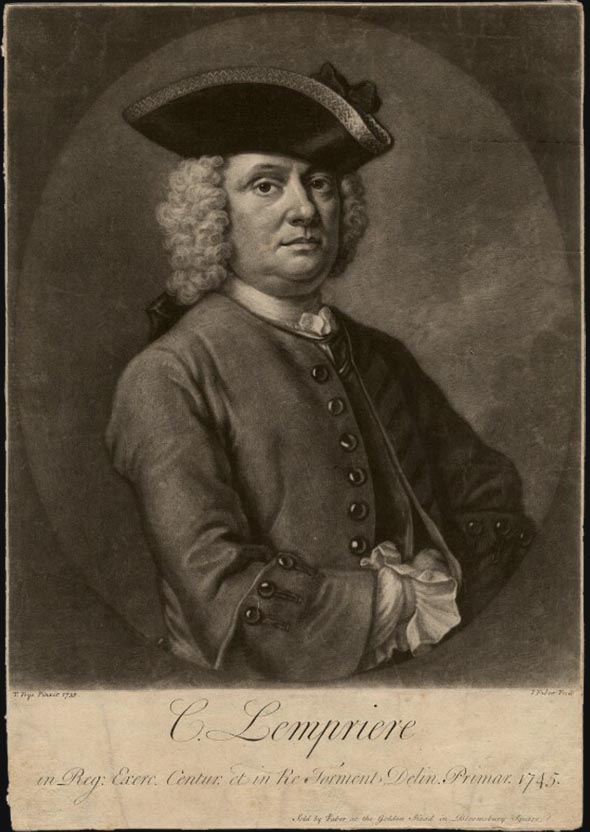 Clement Lemprière (January 28, 1682 - July 9, 1746) was a Jerseyman sea captain, military engineer, cartographer, hydrographer, artist, and engraver active in the first half of the 18th century. Of note, most records suggest that Lemprière was born in 1683, but there can be no doubt that his birth was in 1682, as we have found his original baptismal records. We can only assume that 1683 was a transcription error that was subsequently copied by others. Lemprière was born on the isle of Jersey in the town of St. Helier. Little is known of his early life or education, but befitting the life of a sea captain, he was well traveled. There are unverified reports that he was a resident cartographer in charge of the Dawning Room at the Tower of London in 1725 and possibly a drawing tutor to Queen Anne. He is noted for drafting Henry Popple's important map of North America. He traveled to Bermuda sometime in the 1730s, conducting, probably by contract, the first map of that island since the Nelson survey of 1660. By the 1740s he was in the British Army, where he was attached to the Engineering Corps. He was later appointed Chief Draughtsman of the Ordnance Office. His most acclaimed work is a set of sixteen sketches for the eleven tapestries of the Spanish Armada that once hung in the British Parliament. When the Parliament house burnt in 1834, the original tapestries were lost, leaving Lemprière sketches as the only surviving record.