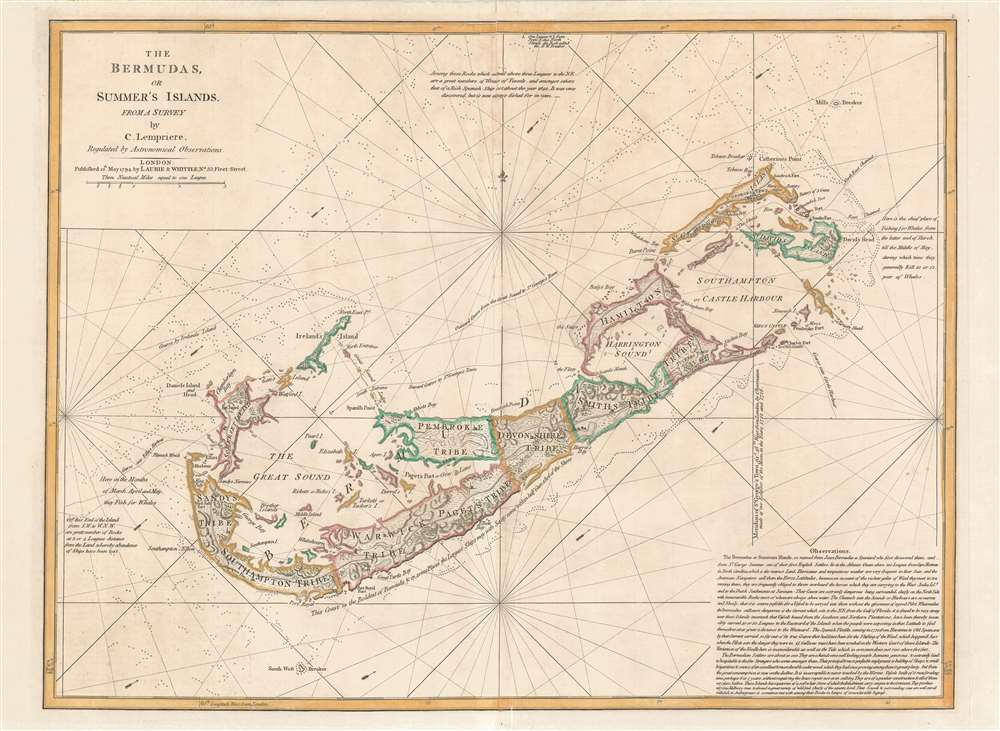 This is the first commercial sea chart an map of Bermuda to incorporate data from Clement Lemprière's important survey of 1738. The map covers all of Bermuda and some of the adjacent seas. Crosses at sea illustrate the locations of shoals and reefs. The map features detailed topography, noting roads, nautical routes around the island, settlements, and more. Administrative districts, or 'Tribes' are identified throughout. In the lower right in a long block text of considerable value to the mariner.

Bermuda, a haven for smugglers

Lemprière was probably contracted by the governor of Bermuda to survey the island in an attempt to curb smuggling. By the 18th century Bermuda had become a mecca for smugglers. The small archipelago was conveniently located on the trade route between the West Indies and Europe. Free traders, pirates, and smugglers from all countries could conceal themselves in any of Bermuda's many hidden coves and bays and conduct trade without pay the East India Company tax. They could also use the hidden coves to trade with foreign nations under British embargo. The colonial governors tried in vain to stop the rampant smuggling, but with only a small military staff and a host of corrupt official, the effort proved hopeless.

The Tribes of Bermuda

The Somers Isles company was founded by the shareholders of the Virginia Company formed in 1614. When the Virginia company folded in 1622, Somers Isles Company, with a separate charter, continued to administer Bermuda foe nearly six decades. Most of Bermuda was subdivided into eight equally sized administrative zones initially termed 'tribes,' later changed to 'parishes'. These were named for shareholders in the Company, and were further divided (by tribe roads) into lots equating to shares held. Saint George formed a ninth subdivision, now the eastern-most parish, incorporating Saint George's Island, Saint David's Island, part of the Main Island, and various smaller islands and islets around Castle Harbour (then known as Southampton Harbour) and Saint George's Harbour. This area was held in common by the Company shareholders and served as Bermuda's original capital, Saint George's Town. While Saint George Harbour was easily accessed by maritime merchants, the location of the capital made it difficult to administer the western part of the island, where smugglers and pirates were most active.

The cartography here, as previously noted, dates to Clement Lemprière's important survey, the first modern survey of the archipelago and is considerable advancement upon the Richard Norwood's 1662 survey. It is unclear of the exact dates when Lemprière conducted his Bermuda survey, but it was most likely in the early 1720s. Lemprière's own map was engraved by Toms and published in 1738, but is today near unobtainable. In 1775 Robert Sayer engraved the first state of this map, the plate for which subsequently was acquired by the firm of Laurie and Whittle. Due to the accuracy of Lemprière's survey, and dearth of new information, this map was published in nautical atlas and issued separately until 1829. Examples are scarce to the market.

Clement Lemprière (January 28, 1682 - July 9, 1746) was a Jerseyman sea captain, military engineer, cartographer, hydrographer, artist, and engraver active in the first half of the 18th century. Of note, most records suggest that Lemprière was born in 1683, but there can be no doubt that his birth was in 1682, as we have found his original baptismal records. We can only assume that 1683 was a transcription error that was subsequently copied by others. Lemprière was born on the isle of Jersey in the town of St. Helier. Little is known of his early life or education, but befitting the life of a sea captain, he was well traveled. There are unverified reports that he was a resident cartographer in charge of the Dawning Room at the Tower of London in 1725 and possibly a drawing tutor to Queen Anne. He is noted for drafting Henry Popple's important map of North America. He traveled to Bermuda sometime in the 1730s, conducting, probably by contract, the first map of that island since the Nelson survey of 1660. By the 1740s he was in the British Army, where he was attached to the Engineering Corps. He was later appointed Chief Draughtsman of the Ordnance Office. His most acclaimed work is a set of sixteen sketches for the eleven tapestries of the Spanish Armada that once hung in the British Parliament. When the Parliament house burnt in 1834, the original tapestries were lost, leaving Lemprière sketches as the only surviving record. Learn More...