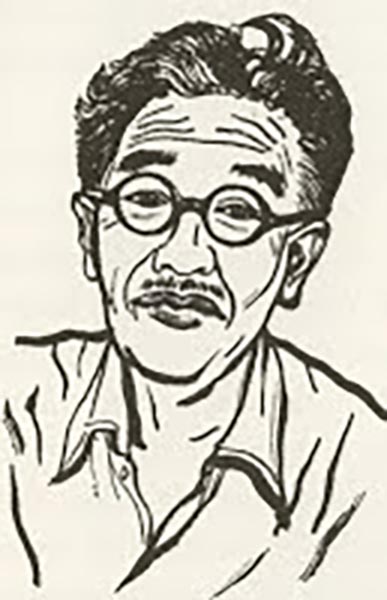 Maekawa Senpan (前川千帆, October 5, 1888-1960) was a Japanese printmaker, artist, and cartoonist active in the first half of the 20th century. Maekawa was born in Kyoto, the younger brother of print-artist, Asaga Manjiro (1885-1965). From about 1905 he studied with Asai Chu (1856-1907) at the Kansai Bijutsuin (Kansai Fine Art Academy). In 1911 he relocated to Tokyo, taking work as a charicaturist and cartoonist for the Yomiuri Shinbun, the Kokumin Shinbun, and for Tokyo Pakku (Tokyo Puck). While in Tokyo, he thought himself woodblock printing and was a member of the Japanese Print Association from 1931 – 1960. During World War II, he was active with the Nihon Manga Hōkō Kai, a government sponsored cartoonists society organized to support the war effort. He was a staunch traditionalist while at the same time a political radical. Artistically, Maekawa was connected to the Sōsaku-hanga (創作版画) movement. Following the war his work became popular with the occupying forces and was repressed in several international exhibits, earning him global recognition.