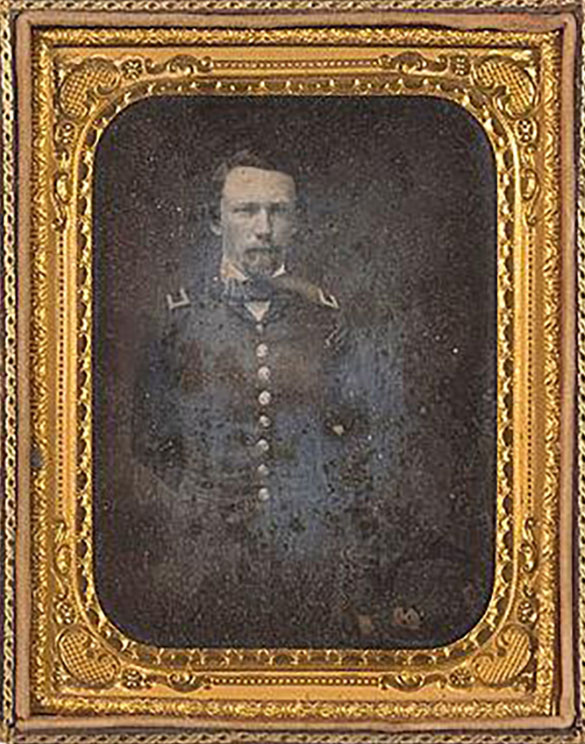 William Emery Merrill (October 11, 1837 - December 14, 1891) was an American engineer and soldier. Born at Fort Howard, Wisconsin, Merrill was the son of Captain Moses Merrill (1803 - 1847), a distinguished officer who was killed leading the 5th U.S. Infantry at the 1847 Battle of Molino del Ray, during the Mexican-American War (1846 - 1848). Then President Franklin Pierce (1804 - 1869), as a tribute to the elder Merrill, nominated William Emery as a legacy candidate to United States Military Academy at West Point. Merrill, excelled at engineering, graduated first in the West Point class of 1859. He subsequently worked as an assistant professor of engineering at the Academy from September 1860 until July 1861. At the outbreak of the American Civil War (1861 - 1865), Merrill was sent to construct fortifications with the Department of the Ohio. There, during the September 1861 Battle of Cheat Summit Fort, Merril was captured and sent to Richmond, VA, where he remained until February 1862, when he was paroled. He was then sent to Fort Monroe, where he was commissioned as an assistant engineer to the Union Army of the Potomac, in which capacity he served during the Peninsular Campaign and Northern Virginia Campaign. In 1863, Union Major General William S. Rosecrans, 'Olde Rosy', promoted Merrill to 'Engineer Officer in chart of the Topographical Department.' His work mapping Tennessee and Northern Georgia proved instrumental and revolutionary, leading to Union victories in the region. Later in the war, from July 1864 until September 1865, Merrill commanded a regiment of veteran volunteer engineers in the service of the Armies of Kentucky and the Cumberland, where he participated in most major engagements. During his service in the Civil War, Merrill competed a number of important maps for use by officers in the field. After the war, from 1867 until 1870, Merrill took the position of Chief Engineer on the staff of General William T. Sherman (1820 - 1891). When he left Sherman's staff in 1870, he took on various government contracts for improvements to the Ohio, Allegheny, Monongahela and Muskingum Rivers. In this capacity he wrote two engineering manuals on bridges and dam building. Merrill died suddenly from a heart attack while on this assignment on a train in Ohio.