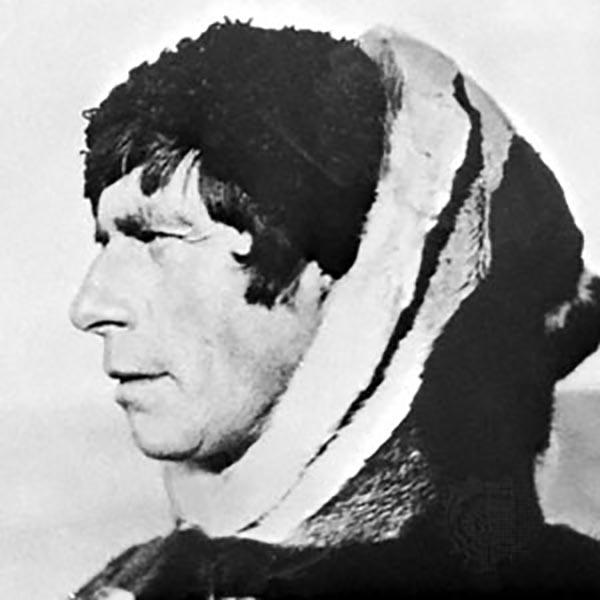 Knud Johan Victor Rasmussen (June 7, 1879 - December 21, 1933) was a Greenlandic-Danish anthropologist and Arctic explorer. Known as the 'father of Eskimology', Rasmussen was the first European to cross the Northwest Passage by dog sled. Born in Jakobshavn, Greenland to a Danish missionary father and an Inuit-Danish mother, Rasmussen grew up in Greenland among the Kalaallit and learned to speak Kalaallisut, drive dog sleds, hunt, and live in harsh Arctic conditions. He was educated in Lynge, North Zealand, Denmark, and pursued and unsuccessful career as an actor and opera singer between 1898 and 1900. He was a member of The Danish Literary Expedition in 1902 - 1904 (his first expedition), which studied Inuit culture. He wrote The People of the Polar North, a combination scholarly account of Inuit folklore and travel journal after returning home. It was published in 1908, and he went on the lecture circuit. Rasmussen and his friend Peter Freuchen established the Thule Trading Station in Cape York, Greenland, in 1908. The pair chose the name Thule after the ancient belief in the 'Ultima Thule', the point the ancients believed to be the farthest north. At that point, Thule Station was the northernmost trading post in the world, making it the literal 'Ultima Thule'. Rasmussen used Thule Trading Station as the basis for his seven Arctic expedition, all known as the Thule Expeditions, between 1912 and 1933. Rasmussen died in 1933 after contracting pneumonia following an episode of food poisoning at the beginning of the Seventh Thule Expedition. He died a few weeks later in Copenhagen at the age of 54. He married Dagmar Andersen in 1908 with whom he had three children.