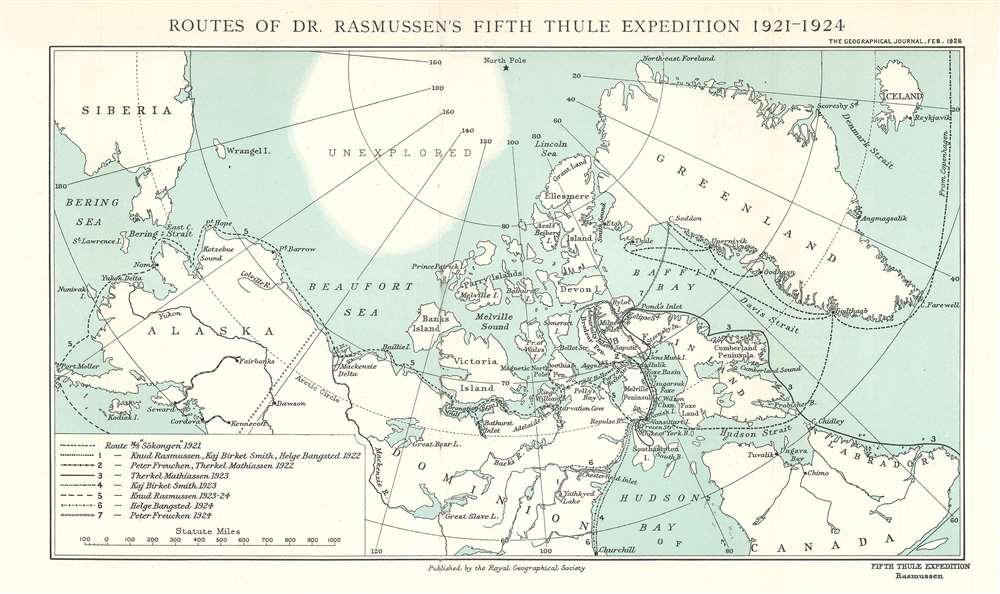 This is a 1926 Knud Rasmussen map of the Arctic and the Fifth Thule Expedition. Depicting the region from Siberia to Iceland and from the North Pole to Churchill, Canada, on Hudson Bay, eight routes record separate parts of the expedition. A key in the lower left presents the various patterns employed to differentiate between these lines and specify which explorer's exploits are traced. Individual islands throughout the Arctic Ocean are labeled, along with bays, peninsula, inlets, and other coastal features. Rivers and lakes in Canada are also illustrated.

The Fifth Thule Expedition (1921 - 1924) has become known as Rasmussen's 'greatest achievement'. Rasmussen states in the paper read to the Royal Geographical Society that 'The principal object of the expedition was to study the Eskimo. But in addition to this we had also others, such as cartographical, geographical, and geological investigations, meteorological observations, as well as botanical, zoological, and especially ethnographical, collections.' He and his team left in 1921 aboard the schooner Soekongen and first traveled to Greenland to pick up supplies, recruit the native members of their expedition, and seventy-five sled dogs at Rasmussen's Thule Trading Station. From Thule they proceeded to eastern Canada, where they established a base camp on an 'unknown island' between Frozen Strait and Lyon Inlet. The teams then dispersed, many of which accomplished their tasks and then went back to Denmark. Rasmussen spent the longest 'out in the cold' and chose to travel home via the Northwest Passage from Hudson Bay to Alaska. He spent the next eighteen months with two Eskimo. When commenting on this leg of the expedition, Rasmussen stated

Accustomed as we were to travelling in Greenland, we had little difficulty in making our w ay through Canada and Alaska. On journeys of such length we were, of course, often obliged to live on the resources of the country. But I may say that we never had much difficulty in finding and procuring such game as we needed. The whole journey from Hudson Bay through the North-West Passage, Canada, and north of Alaska was accomplished with the same single team of dogs. So there is very little to offer you in the way of terrible hardships or narrow escapes. Our greatest trouble was the constant snowstorms, but we got used to those in time. It is not much good going to Arctic Canada if you only want to travel on fine days.

This map was created to accompany an article by Knud Rasmussen published in the February 1926 edition of The Geographical Journal entitled 'The Fifth Thule Expedition, 1921 - 1924. The Danish Ethnographical and Geographical Expedition from Greenland to the Pacific.' An example is cataloged in OCLC and is part of the collection at ETH-Bibliothek Zurich in Zurich, Switzerland.

Knud Johan Victor Rasmussen (June 7, 1879 - December 21, 1933) was a Greenlandic-Danish anthropologist and Arctic explorer. Known as the 'father of Eskimology', Rasmussen was the first European to cross the Northwest Passage by dog sled. Born in Jakobshavn, Greenland to a Danish missionary father and an Inuit-Danish mother, Rasmussen grew up in Greenland among the Kalaallit and learned to speak Kalaallisut, drive dog sleds, hunt, and live in harsh Arctic conditions. He was educated in Lynge, North Zealand, Denmark, and pursued and unsuccessful career as an actor and opera singer between 1898 and 1900. He was a member of The Danish Literary Expedition in 1902 - 1904 (his first expedition), which studied Inuit culture. He wrote The People of the Polar North, a combination scholarly account of Inuit folklore and travel journal after returning home. It was published in 1908, and he went on the lecture circuit. Rasmussen and his friend Peter Freuchen established the Thule Trading Station in Cape York, Greenland, in 1908. The pair chose the name Thule after the ancient belief in the 'Ultima Thule', the point the ancients believed to be the farthest north. At that point, Thule Station was the northernmost trading post in the world, making it the literal 'Ultima Thule'. Rasmussen used Thule Trading Station as the basis for his seven Arctic expedition, all known as the Thule Expeditions, between 1912 and 1933. Rasmussen died in 1933 after contracting pneumonia following an episode of food poisoning at the beginning of the Seventh Thule Expedition. He died a few weeks later in Copenhagen at the age of 54. He married Dagmar Andersen in 1908 with whom he had three children. Learn More...

Rasmussen, K., 'The Fifth Thule Expedition, 1921 - 1924. The Danish Ethnographical and Geographical Expedition from Greenland to the Pacific.' The Geographical Journal Vol 67, No. 2 (London: Royal Geographical Society) 1926.