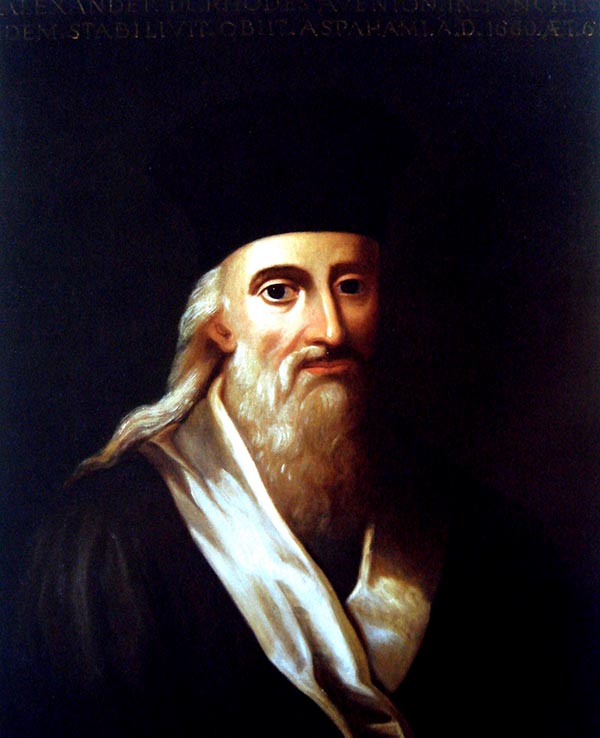 Alexander de Rhodes (March 15, 1593 - November 5, 1660) was a French Jesuit father, mapmaker, historian, and lexicographer active in Vietnam in the early 17th century. It is believed that he may have been of Jewish descent. Rhodes was born in Avignon, France and took Jesuit vows in 1612. He sailed to Macau in 1623 with the intention of joining a mission in Japan. When the Shogun banned missionary activity, Rhodes was redirected to a growing Jesuit mission in Hoi An, near present day Danang, then part of the Champa Kingdom, Chochinchina. Rhodes stated at the mission in Chochinchina mission from December 1624 to July 1627). The Champa Kingdom (Chiampa) in south central Vietnam, and the Tonkin Kingdom around Hanoi, were then at war and travel between the two kingdoms impossible - in fact there was a wall. Rhodes then set sail northward, traveling all the way to Macao, before turning south to the largely unknown Kingdom of Tonkin. There he established the first Jesuit mission in Tonkin. He remained in Tonkin in March 1627. He became one of the first Europeans to become proficient in Vietnamese. In July 1630, the Viet king, Trịnh Trán, accused him of spying for the Nguyễn of the Champa Kingdom and exiled him from Tonkin. More likely his Christian teachings were taking hold in court and threatening the polygamas values of Vietnam. Taking refuge in the regional Jesuit center in Macao, where he composed a history of Chochinchina. When political tensions lessened in 1640, he returned to Tonkin, traveling throughout the country, often in disguise. Rhodes left Vietnam for the last time in 1645, returning to Rome in 1649. Rhodes published two maps, a tiny map measuring 12 x 18 cm for his 1650 history of Tonkin, and in partnership with Pierre Mariette, a much larger and more detailed map published for his 1653 Divers voyages et missions du P. Alexandre de Rhodes. This second map is considered the first significant published European map of Tonkin. Later in life, Rhodes helped to found the Paris Foreign Missions Society in 1659. As neither the Portuguese nor the Pope showed interest in the project, Alexandre de Rhodes, with Pope Alexander VII's agreement, found secular volunteers in Paris in the persons of François Pallu and Pierre Lambert de la Motte, the first members of the Paris Foreign Missions Society, who were sent to the Far-East as Apostolic vicars. Rhodes was sent on a final missionary voyage, to Persia. He died in Isfahan in 1660 and was buried in the New Julfa Armenian Cemetery.