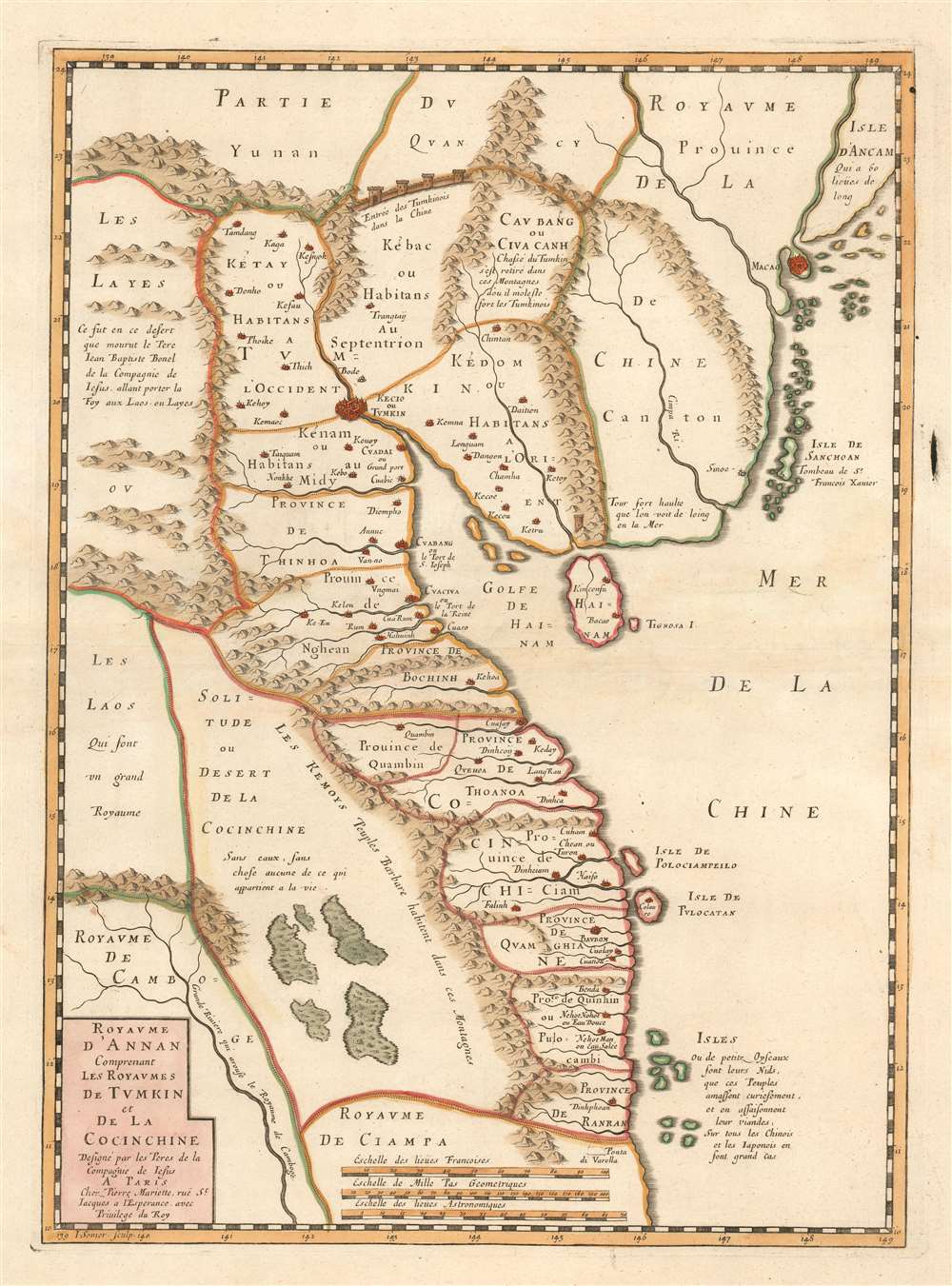 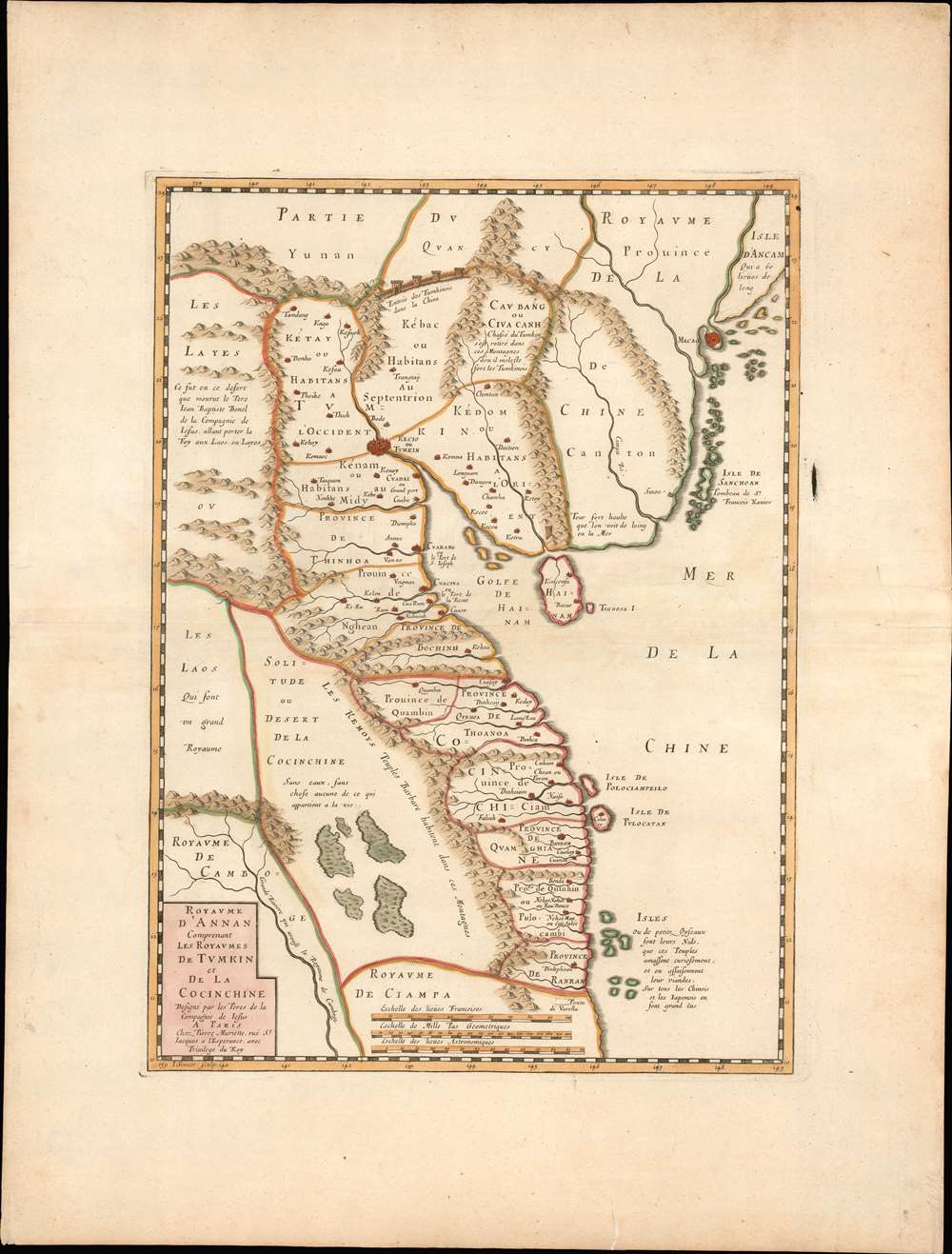 The first specific map of Vietnam!

An extraordinary rarity, this is the Alexander de Rhodes and Pierre Mariette 1653 map of Vietnam. This is considered the first specific map of the Kingdom of Annam, or Tonkin, what would later become North Vietnam. Coverage extends from roughly Quảng Ngãi, north to the Chinese border, and west as far as Laos and Cambodia. This map represents a major milestone in the mapping of Vietnam and would prove the underpinning cartography of this region through the mid-19th century.

Cartographically the map is based upon a combination of older cartographic data and firsthand reconnaissance by the Jesuit Missionary Alexandre de Rhodes, who established the first Catholic mission in Tonkin between 1627 and 1645. Before Rhodes, the Gulf and Kingdom of Tonkin was almost entirely unknown to Europeans. The Portuguese (based in Macao) and later the Jesuits established trading and missionary relations with the rival Champa Kingdom (near modern day DaNang in Central Vietnam), but due to political tensions between North and South Vietnam (Champa and Tonkin, respectively), did not initially venture further north. In fact, the islands marked on this map, 'Polociampeilo and Pulocatan' are the northernmost point of Portuguese exploration and the marker by which earlier rutters directed navigators to turn northeast, bypassing the Gulf of Tonkin entirely, en route to Macao. Rhodes was sent to establish mission in Tonkin in 1627, after the Jesuits were expelled from Tokugawa Japan. His mission was reportedly successful, but his missionary work eventually ran contrary to traditional Vietnamese values, and he was expelled from Tonkin. Nonetheless, during his long tenure in Tonkin, he developed previously unknown understanding of the country, language, terrain, and peoples.

Although well trained mathematically, Rhodes appears do have completed few if any calculations of geographic coordinates. The coastline is roughly similar to that presented on previous general map of the region, with the Gulf of Tonkin jutting like a wedge into the mainland. It is the inland cartography that is here most significant. The map extends from the border with the Champa Kingdom, roughly near modern day Hoi An, north as far as Macao, what would become Hong Kong, and Yunnan, though encompassing the totality of Rhodes' Chochinchina travels. He is the first to lay a groundwork for the inland cartography of North Vietnam / Tonkin, detailing provinces, major cities, river systems, and political affiliations. The major North Vietnamese city, Tonkin (Hanoi) is noted. As is the central highland range that divides the 'civilized' coastlands with the supposedly barbarous tribal peoples, noted here as the Kemoy'.

Rhodes also notes the rebel province of Cao Bang (Cav Bang) where, when he was living in Vietnam, hosted the Mac family redoubt. The Mac overthrew the le dynasty in 1527, usurping the throne. Although eventually expelled and forced into exile, they Mac family retreated to their strongholds in the mountainous Chinese border province of Cao Bang. They remained a thorn in the side of the Trịnh kings until finally suppressed in 1667 - well after Rhodes' return to Europe.

West of Cao Bang is a great wall labeled 'Entrée des Tunkinois dans la Chines'. Roughly corresponding to Lạng Sơn, this fertile valley was the pathway of armies. Although changing hands multiple times, the Lạng Sơn corridor was the primary overland gateway to China, and the source of constant consternation to the Trịnh Kings of Tonkin. Later, it was similarly problematic to the French. Even the name of this map, 'Annan', which would later become 'Annam' is derived from the Chinese term for 'pacified peoples'.

In the upper left here is a note referring to another Jesuit Father, Jean Baptiste Bonel (Giovanni Battista Bonelli; 1589 - 1638). The note roughly corresponds to the upper Mekong and Laos in the vicinity of Luang Prabang. Bonelli met his end exploring an overland route from Tonkin to Vientiane (Laos) in 1638.

This map was engraved by Jean Pruthenus Somer and drawn by Pierre Mariette in Paris for publication in Alexander de Rhodes, 1653 Divers voyages et missions en la Chine et autres royaumes de l'Orient, avec son retour en Europe par la Perse et l'Arménie, the first and most important Jesuit description of the Kingdom of Tonkin. Two examples of the separate map are cataloged at the Bibliothèque Nationale de France. We have identified a single instance of this map appearing on the private market. In 2017, an example sold at auction in France for roughly 13,000 USD, before buyer's premium. A once in a lifetime opportunity.

Alexander de Rhodes (March 15, 1593 - November 5, 1660) was a French Jesuit father, mapmaker, historian, and lexicographer active in Vietnam in the early 17th century. It is believed that he may have been of Jewish descent. Rhodes was born in Avignon, France and took Jesuit vows in 1612. He sailed to Macau in 1623 with the intention of joining a mission in Japan. When the Shogun banned missionary activity, Rhodes was redirected to a growing Jesuit mission in Hoi An, near present day Danang, then part of the Champa Kingdom, Chochinchina. Rhodes stated at the mission in Chochinchina mission from December 1624 to July 1627). The Champa Kingdom (Chiampa) in south central Vietnam, and the Tonkin Kingdom around Hanoi, were then at war and travel between the two kingdoms impossible - in fact there was a wall. Rhodes then set sail northward, traveling all the way to Macao, before turning south to the largely unknown Kingdom of Tonkin. There he established the first Jesuit mission in Tonkin. He remained in Tonkin in March 1627. He became one of the first Europeans to become proficient in Vietnamese. In July 1630, the Viet king, Trịnh Trán, accused him of spying for the Nguyễn of the Champa Kingdom and exiled him from Tonkin. More likely his Christian teachings were taking hold in court and threatening the polygamas values of Vietnam. Taking refuge in the regional Jesuit center in Macao, where he composed a history of Chochinchina. When political tensions lessened in 1640, he returned to Tonkin, traveling throughout the country, often in disguise. Rhodes left Vietnam for the last time in 1645, returning to Rome in 1649. Rhodes published two maps, a tiny map measuring 12 x 18 cm for his 1650 history of Tonkin, and in partnership with Pierre Mariette, a much larger and more detailed map published for his 1653 Divers voyages et missions du P. Alexandre de Rhodes. This second map is considered the first significant published European map of Tonkin. Later in life, Rhodes helped to found the Paris Foreign Missions Society in 1659. As neither the Portuguese nor the Pope showed interest in the project, Alexandre de Rhodes, with Pope Alexander VII's agreement, found secular volunteers in Paris in the persons of François Pallu and Pierre Lambert de la Motte, the first members of the Paris Foreign Missions Society, who were sent to the Far-East as Apostolic vicars. Rhodes was sent on a final missionary voyage, to Persia. He died in Isfahan in 1660 and was buried in the New Julfa Armenian Cemetery. Learn More...