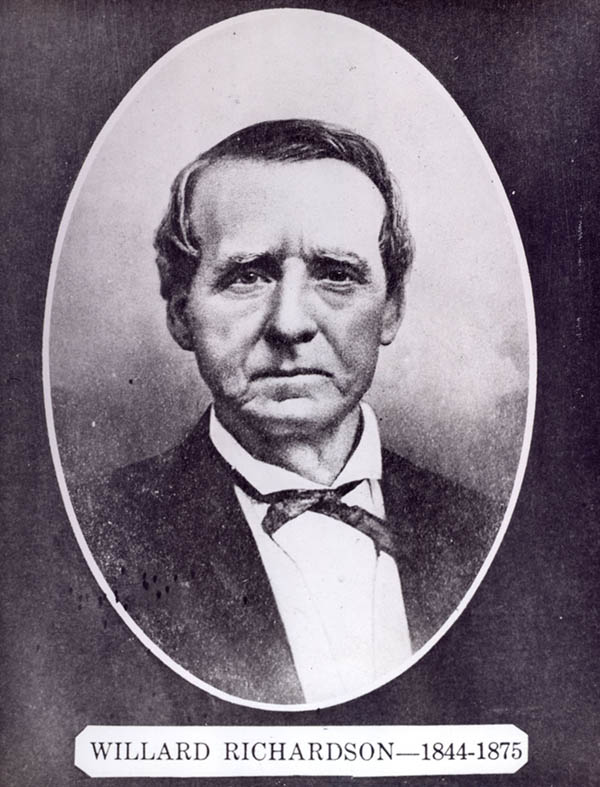 Willard Richardson (June 24, 1802 - July 16, 1875) was a Texan newspaperman and publisher active in the mid-19th century. Richards was born in Marblehead, Massachusetts. In 1818, he relocated with his brother to Charleston, South Carolina. Shortly thereafter, his brother died of yellow fever. With the support of a local judge, he attended state collage at Columbia, South Carolina, graduating in 1828. He subsequently moved to Texas in 1837 to work as a surveyor. Within a few years, he returned to teaching, establishing a school in Houston, which he ran for nine years. During this time, he befriended Francis Moore, editor of the Telegraph and Texas Register. Moore traveled to Washington D.C. to cover a presidential campaign, leaving Richardson in charge of the Register. Richardson proved so effective he garnered the attention of the Galveston News owners Wilbur H. Cherry and Benjamin F. Neal, who were looking for a new editor and offered him the position. There he developed a reputation for Whig values and supported the state's rights beliefs of John C. Calhoun. He was also an ardent secessionist. He began publishing the Texas Almanac in 1857. In time he became one of the wealthiest and most powerful newsmen in antebellum Texas. Richardson died in Galveston in 1875.