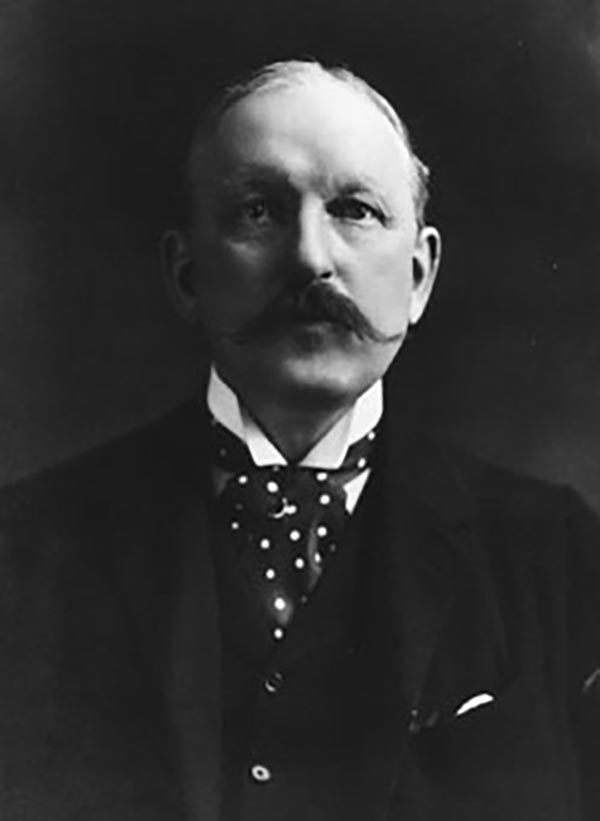 William Woodville Rockhill (May 1, 1854 - December 8, 1914) was an American diplomat, the first American to learn to speak Tibetan, and the author of the American Open Door Policy towards China. Born in Philadelphia, Rockhill's father died when he was ten months old leaving behind a wife and two young sons. His mother, Dorothea, came from a wealthy Baltimore family, and when William was eleven she moved the family to Paris, and installed them in a small apartment close to the Place Pereire. Rockhill soon gained admission to the École spéciale militaries de Saint-Cyr, the French West Point, with the help of the American minister in Paris. It was here that Rockhill discovered the work of Abbé Huc which described his travels in China and Tibet. Rockhill developed a deep fascination for the subject, and after some inquiries, found himself a tutor in Tibetan at the Bibliothèque Nationale. After graduation from Saint-Cyr, Rockhill served for three years as a second lieutenant in the French Foreign Legion in Oman before resigning his commission and returning to the United States to court a young woman, Caroline Tyson. Caroline and William married on December 14, 1876, and soon the couple bought a cattle ranch in New Mexico with Caroline's uncle. The couple spent four years ranching Texas longhorns, and Rockhill used to devoted much of his time to studying Tibetan, Chinese, and Sanskrit. Eventually, after four hard years and no real wealth amassed, the ranch was sold and Rockhill and Caroline moved their family to Montreux, Switzerland, where his mother and her Swiss husband lived. Here Rockhill devoted his time to translating the Undânvarga, a Tibetan work of Indian moral maxims, and two other sacred Tibetan texts. In 1884, Caroline Rockhill unexpectedly inherited $70,000 from a cousin, a fortune with which her husband could finally afford his long-desired trip to China. With this trip came an appointment as an unpaid member of the staff of the American Legation in Peking, which soon became a paid position. During his time in China, Rockhill undertook two extended trips into western China, Mongolia, and Tibet. After serving for nearly a decade in China, Rockhill was named Third Assistant Secretary of State in April 1894, and soon began climbing the ranks in the State Department, serving as the U.S. Minister to Greece from 1897 - 1899, as well as Minister to Serbia and Minister to Romania. After the outbreak of the Boxer Rebellion, Secretary of State John Hay turned to Rockhill for advice, and Rockhill's response was the now famous Open Door Policy towards China. Rockhill was named Minister to China by Theodore Roosevelt and serving from June 17, 1905 until June 1, 190. He then served as Minister to Russia from January 11, 1910 until June 17, 1911. Rockhill was named Advisor to the President of China in 1914, and, after leaving San Francisco on his way to take up the position, developed pleurisy and had to disembark at Honolulu for treatment. Here, after recovering from the pleurisy, Rockhill suffered heart failure and died on December 8, 1914.