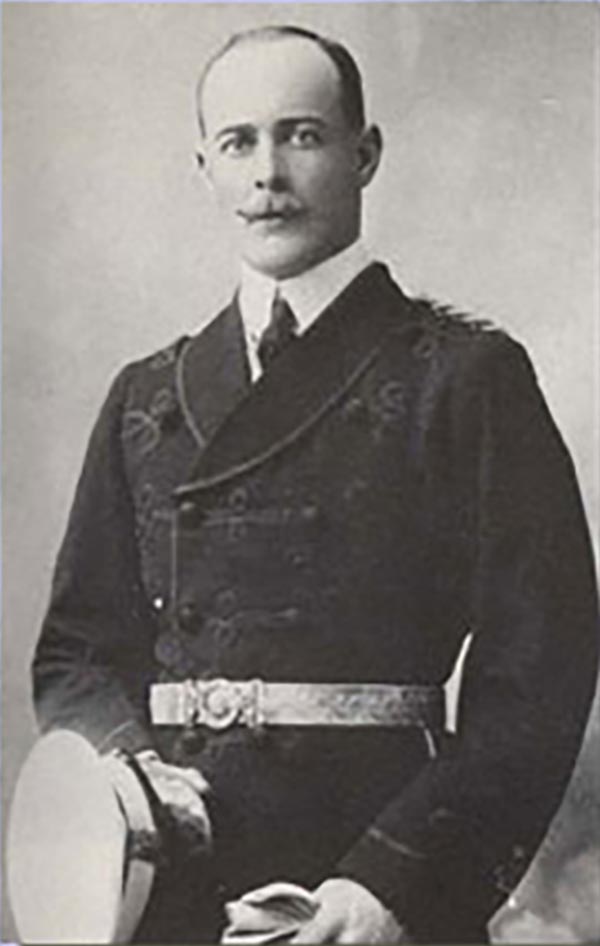 Captain William Henry Irvine Shakespear (October 29, 1878 – January 24, 1915) was a British civil servant and explorer. He was born in India. There is little report of his early life, but colonial life appears to have been an education: he was a talented linguist, fluent in Urdu, Pushtu, Persian and Arabic. In 1898 he served in the Army in India before moving to the Political Department. He became Consul in Iran in 1904, and was assigned as Political Agent to Kuwait in 1909. During this posting he began to explore and document the areas he found himself sent. In 1910, he would become the first European to meet Abdul Aziz ibn Abdulrahman Al-Saud (Ibn Saud,) who would become the King and founder of modern Saudi Arabia. In 1914, Shakespear undertook an expedition across Arabia from Kuwait to Riyadh, and then to Aqaba, skirting the Nefud desert. Most of this 1800-mile route had never been mapped prior to this journey. Photographs taken on the journey include the first ever of Ibn Saud - with whom Shakespear had developed a rapport. He would establish the first official British contact with Ibn Saud, whose support the British government asked Shakespear to secure in order to protect the British flank (the British-Indian Mesopotamian Expeditionary Force had just taken Basra.) Shakespear became military adviser to Ibn Saud until 1915, when he was shot and killed while photographing the Battle of Jarrab. History is left to speculate on the likely course of events in the Middle East had he survived as a champion of Ibn Saud, winning British arms and support for him rather than Sherif Hussein ibn Ali, as did Lawrence.