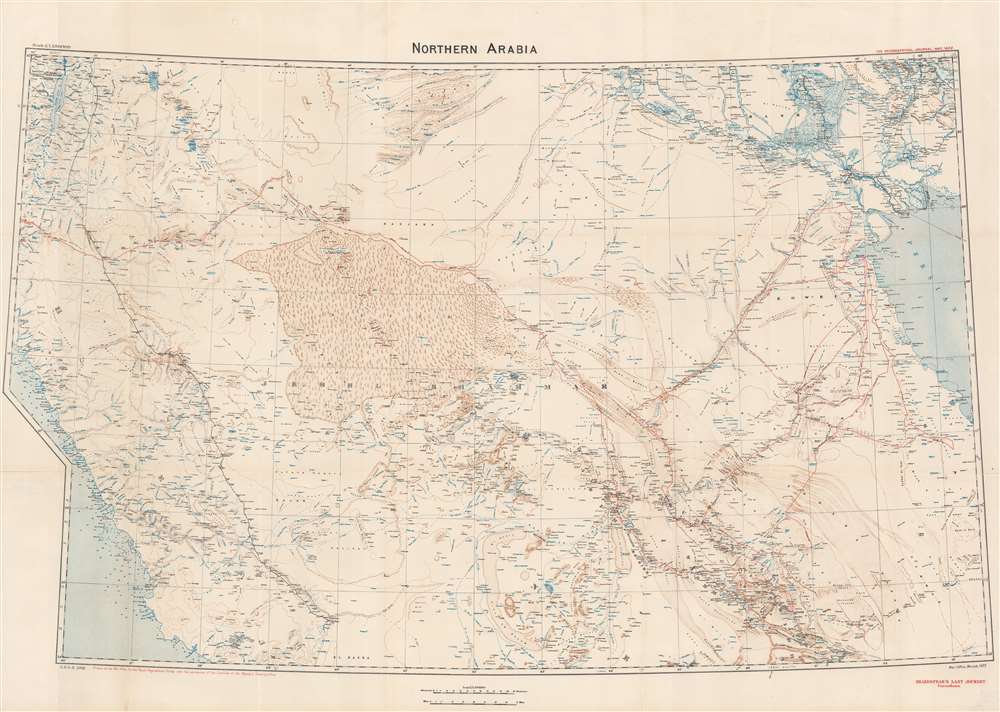 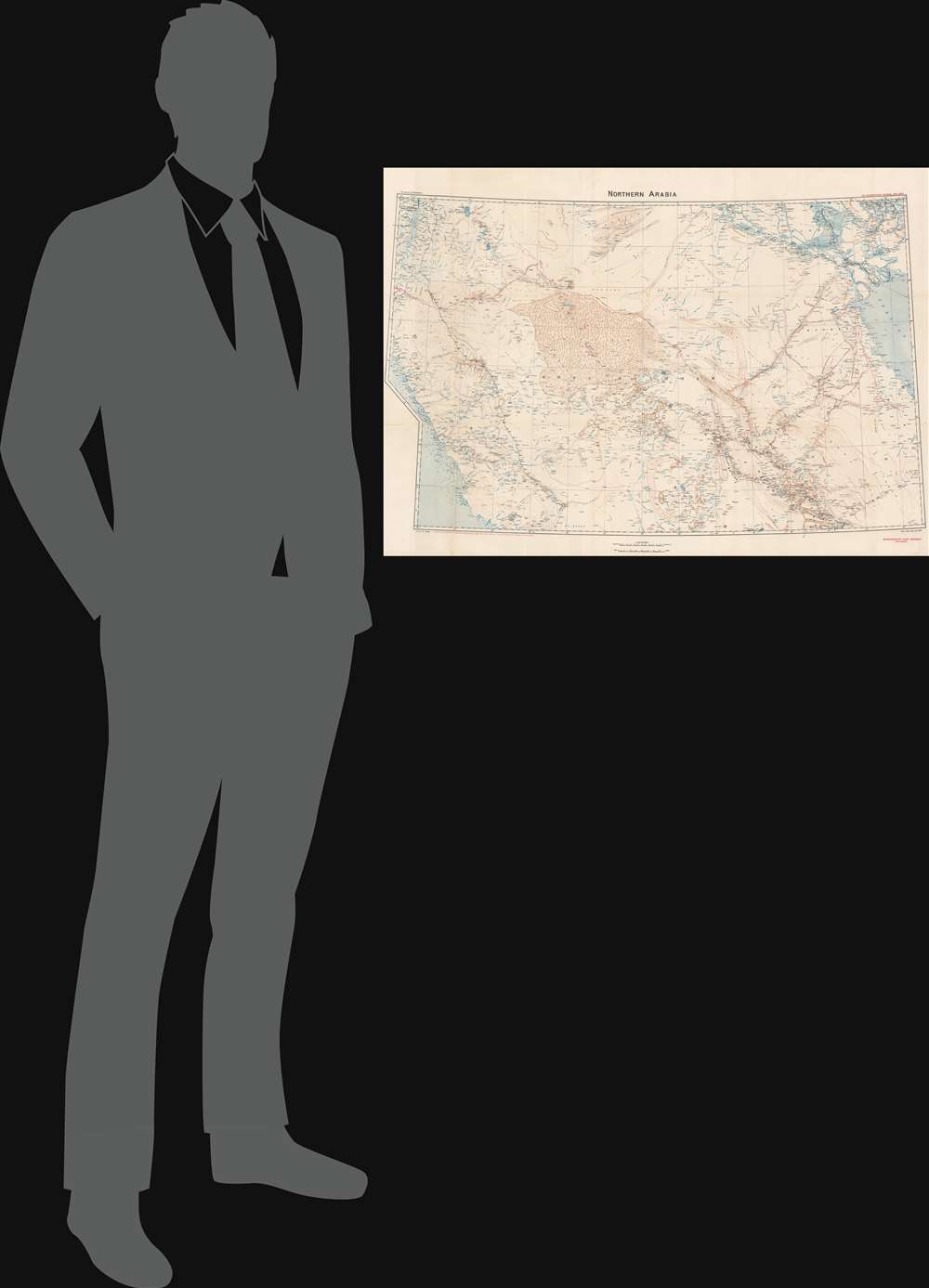 Summation of the First European Surveys of Northern Arabia Embracing the History of the Arab Revolt.
$950.00

This 1922 Royal Geographic Society map of northern Arabia, Jordan, Kuwait and Southern Iraq, capturing the first European surveys of this region, frames the dramatic first British government efforts to map this previously uncharted region and build new alliances before and during World War I (1914 - 1918). The map - very probably the work of Douglas Carruthers but attributed only to the General Staff Geographical Section of the British War Office - has been further overprinted to highlight the heroic accomplishments of Captain William Shakespear, the first European to map the north-central part of the Arabian Peninsula and an advisor to Ibn Saud (1876 - 1953), future King of Saudi Arabia.

Carruthers, a cartographer for the British War Office, was a compiler. His offices collected data from British surveyors in the field, the work of figures like Harry St. John Bridgen Philby, Gertrude Bell, William Shakespear, and T. E. Lawrence. The contributions of many of these are noted on the map itself, including those of G. Forster Sadlier, dating to 1818. The resulting three-color map shows wadis, rivers, lakes, wetlands, oases, and seas in blue, desert topography pictorially in brown, and placenames, roads and railways, and latitude and longitude in black. Red Sea coastlines include soundings. The center of the map is dominated by the dunes of the great Nefud desert, a region unmapped until the 1914 efforts of Captain William Shakespear.

This state of the map includes a further overprinting, in red, of Carruther's mapping of the Arabian journeys of William Henry Irvine Shakespear. These include discrete journeys, dated on the map, from 1910, 1911, 1913, and 1914. This last, monumental trek runs from Riyadh, northeast to the Nefud (skirting the northern edge of that desert, whose characteristic crescent-shaped dunes are represented pictorially). From there, Shakespear's track leads off the map, ultimately reaching Aqaba. The goal of the journey - beyond its groundbreaking mapping of the previously uncharted Nefud - was to establish a British political link with Abdul Aziz ibn Abdulrahman Al-Saud (Ibn Saud), progenitor of the House of Saud. Shakespear forged a relationship with Ibn Saud and was regarded by the Arab leader as a 'brother'.

The map shows a fragment of the Jaffa-Jerusalem railway, but far and away more prominent is the Hejaz Railway, running through Amman in the north to its southern terminus in Medina. This narrow-gauge railway extended to Damascus to Haifa on the Mediterranean. The original intent was for it to reach Mecca, but the outbreak of World War I prevented its completion. The intent of the railway was to connect Ottoman Istanbul with Mecca, the destination of the Hajj. Consolidating the economic and political ties with the Ottoman provinces in Arabia was another consideration, and for this the railway became an important military artery. Consequently, its accurate mapping was an important feature for the war office map.

We count six examples of the separate map in institutional collections. We are aware of a handful of examples that have appeared at auction in recent years.


Alexander Douglas Mitchell Carruthers (October 4, 1882 – May 23, 1962) was a British explorer, naturalist and cartographer. His travels took him to the Middle East in the early 20th century. Educated at Haileybury and Trinity in Cambridge, he became secretary to a various scholars active in the Royal Geographical Society, training in surveying. He traveled on behalf of he British Museum to the Congo in 1905-6, and in 1910 took part in an expedition through the desert of Outer Mongolia. After his 1915 marriage he ceased travel, and took employment with the War Office compiling maps of the Middle East. He would come to work with map data provided by such luminaries as Harry St. John Bridgen Philby, Gertrude Bell, Captain William Shakespear, and T. E. Lawrence. He was honorary secratary to the Royal Geographical Society from 1916 to 1921 and was a Fellow of the RGS from 1909 to 1962. He wrote many books. He was also an expert taxidermist, and collected a large number of specimens, some of which are still the only samples of those species in the British Museum. Learn More...


Captain William Henry Irvine Shakespear (October 29, 1878 – January 24, 1915) was a British civil servant and explorer. He was born in India. There is little report of his early life, but colonial life appears to have been an education: he was a talented linguist, fluent in Urdu, Pushtu, Persian and Arabic. In 1898 he served in the Army in India before moving to the Political Department. He became Consul in Iran in 1904, and was assigned as Political Agent to Kuwait in 1909. During this posting he began to explore and document the areas he found himself sent. In 1910, he would become the first European to meet Abdul Aziz ibn Abdulrahman Al-Saud (Ibn Saud,) who would become the King and founder of modern Saudi Arabia. In 1914, Shakespear undertook an expedition across Arabia from Kuwait to Riyadh, and then to Aqaba, skirting the Nefud desert. Most of this 1800-mile route had never been mapped prior to this journey. Photographs taken on the journey include the first ever of Ibn Saud - with whom Shakespear had developed a rapport. He would establish the first official British contact with Ibn Saud, whose support the British government asked Shakespear to secure in order to protect the British flank (the British-Indian Mesopotamian Expeditionary Force had just taken Basra.) Shakespear became military adviser to Ibn Saud until 1915, when he was shot and killed while photographing the Battle of Jarrab. History is left to speculate on the likely course of events in the Middle East had he survived as a champion of Ibn Saud, winning British arms and support for him rather than Sherif Hussein ibn Ali, as did Lawrence. Learn More...

Very good condition. Reinforced at some junctures of folds, and two mended splits.