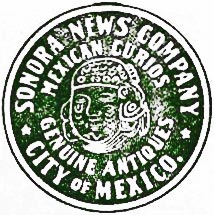 The Sonora News Company (1896 - 1929) was a publisher and chain of antique shops active in Mexico City during the late 19th and early 20th century. Founded by Charles B. Waite (1861 - 1929), an American photographer, the Sonora News Company operated it headquarters at Calle de Gante 4 and also had several novelty, art, and antiquities shops in and near the Hotel Iturbide and sold and/or produced magazines, postcards, guidebooks, souvenirs, and newspapers. Some of their inventory was manufactured in the United States.