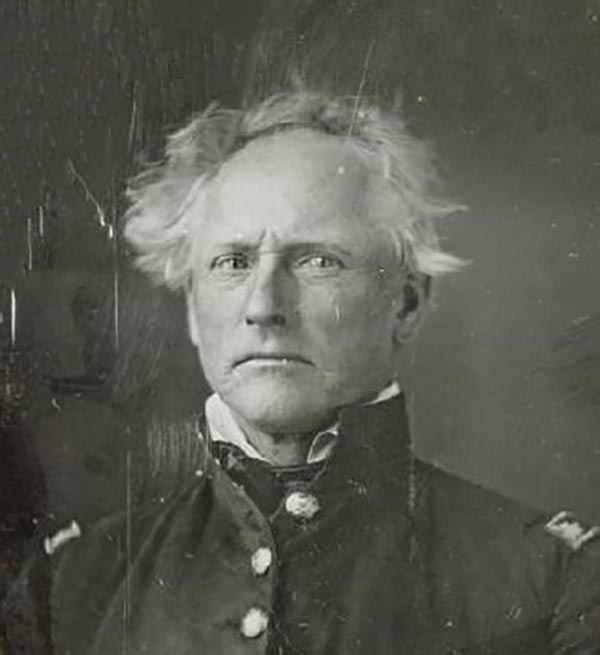 Enoch Steen (February 22, 1800 - January 22, 1880) was an American army officer and explorer active in the middle to late 19th century. Steen was born in Harrodsburg, Kentucky, the third of five children. He grew up in Missouri, where he became a well-known woodsman and hunter. Steen also learnt surveying as a young man before joining the Mounted Rangers as a second Lieutenant on July 16, 1832. On September 19, 1833, he transferred to the 1st United States Dragoons as a second Lieutenant, and took a station at Fort Leavenworth, Kansas. In 1935, Steen accompanied Colonel Henry Dodge (1782 - 1867) on the Dodge Expedition or Second Dragoon Expedition. There his surveying and draftsmanship expertise were leveraged to produce an important map of the region between Fort Leavenworth and Pikes Peak, being the most accurate map of this region yet produced. Later in 1835, he completed a second expedition up the Platte River under Colonel Stephen W. Kearny (1794 -1848). He was subsequently stationed at Fort Gibson where he was promoted to First Lieutenant in 1863 and Captain in 1840. Steen distinguished himself during the Mexican American War, receiving serious wounds and earning an 1847brevet promotion to Major for personal gallantry. From 1849 to 1857 he was stationed in the territory of New Mexico, which had been acquired from Mexico in the Treaty of Guadeloupe-Hidalgo in 1848. There he established various forts and initiated diplomatic relations with various American Indian nations. In 1860, Steen was transferred to Oregon, where he was given command of Fort Walla Walla, but this position was terminated due to the outbreak of the American Civil War. Steen, a Union man despite his Kentucky roots, was promoted to Lieutenant Colonel and posted to Cantonment Holt near Washington D.C. He was then sent to Fort Craig in New Mexico. After the war, he was assigned to Benton Barracks in Missouri. Steen formally retired from service in September of 1863, but continued to perform active military duties and was assigned to the army fort at Sandy Hook, New Jersey. In 1866, he was sent to Colorado Territory to head up Fort Lyon. Eventually the U.S. Congress passed a law prohibiting retired officers from returning to active duty and Steen settled on a farm in Jackson County, Missouri. He remained there until his death. He is today interred at the mount St. Mary's Cemetery in Kansas City.