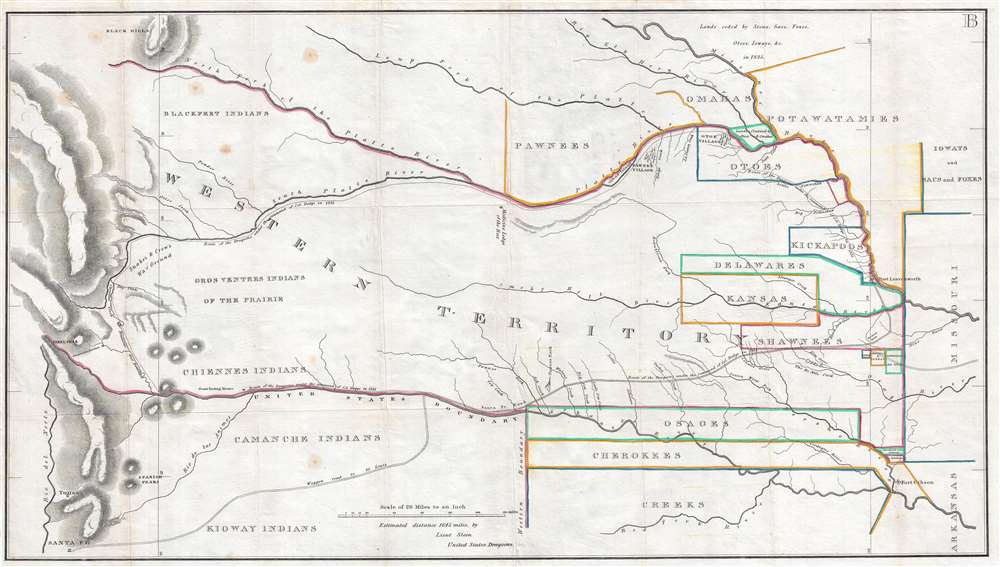 A Watershed in the Cartography of the Plains' - Allen

A fine example of the rare 1846 Henry Dodge / Enoch Steen map of the American west covering much of the American Great Plains. The map follows the 1835 Dodge Expedition, or Second Dragoon Expedition, as they traveled from Fort Leavenworth to the Platte River, through the territories claimed by the Kickapoos and Otoes, west to Grand Island and the Pawnee Village, past the Medicine Lodge of the Rees and to the foot of the mountains, which note Snakes and Crows War Ground. From there they returned along the Arkansas River and the Santa Fe Trail to Fort Leavenworth. In modern terms, Steen's map coverage extends from Santa Fe, New Mexico, to Missouri, and from The Black Hills of South Dakota to the Red Fork River, embracing the Great Plains from the Fort Leavenworth to the Rocky Mountains, inclusive of all of modern-day Nebraska and Kansas, with parts of South Dakota, Wyoming, New Mexico, Texas, Oklahoma, and Missouri.

A Watershed in the Cartography of the Plains

This map was drawn primarily to illustrate the locations of various Indian peoples, identifying the lands of some eighteen tribes, including the Omahas, Potawatamies, Otoes, Kickapoos, Osages, Creeks, Kioway, Camanche, and Gros Ventres. John L. Allen termed Steen's untitled map one of three most important of the 1830s, 'a watershed in the cartography of the plains.' Wheat too speaks highly of the map, which he notes draws on Everrett's 1834 report and McCoy's 1832 manuscript map of the Indian Lands.

The Dodge Expedition was intended to follow up on the accomplishments of the 1834 Dodge-Leavenworth or First Dragoon Expedition. With the passing of the Indian Removal Act of 1830, which led to the Trail of Tears - a series of forced relocations of Native American peoples from their ancestral homelands in the Southeastern United States, to areas to the west of the Mississippi River that had been designated as Indian Territory. At the time, American Government efforts to relocate he eastern tribes west were being frustrated by the existing Plains Indian Tribes - which at this time the United States had no official treaties or even contact with.

Under Col. Henry Dodge and his adjunct, Lieut. Gaines P. Kingsbury (1810-1839), the expedition left Fort Leavenworth on May 29th of 1835. First traveling up the Platte River they made contact with the Otoe, Omaha, Grand Pawnee, and Arickaree tribes. Continuing south along the front range of the Rockies, they reached Bent's Fort or, as on his map, Trading House, on August 6. At Bent's Trading House the expedition held councils with the Arapahoes, Cheyennes, Black Feet, and Gros Ventres, among others, forging new diplomatic relationships and reaffirming those established in the previous year.

Unlike he earlier Dodge-Leavenworth Expedition, this expedition, led by the capable Dodge, lost only a single soldier. The expedition was considered a great success both militarily and politically.

This map was prepared by Enoch Steen. It was published with From Lt. J. P. Kingsbury's Journal of the Expedition of Dragoons, Under the Command of Colonel Henry P. Dodge, to the Rocky Mountains, During the Summer of 1835. It is believed that only 500 of this were produced, making this map quite rare on today's market.

Enoch Steen (February 22, 1800 - January 22, 1880) was an American army officer and explorer active in the middle to late 19th century. Steen was born in Harrodsburg, Kentucky, the third of five children. He grew up in Missouri, where he became a well-known woodsman and hunter. Steen also learnt surveying as a young man before joining the Mounted Rangers as a second Lieutenant on July 16, 1832. On September 19, 1833, he transferred to the 1st United States Dragoons as a second Lieutenant, and took a station at Fort Leavenworth, Kansas. In 1935, Steen accompanied Colonel Henry Dodge (1782 - 1867) on the Dodge Expedition or Second Dragoon Expedition. There his surveying and draftsmanship expertise were leveraged to produce an important map of the region between Fort Leavenworth and Pikes Peak, being the most accurate map of this region yet produced. Later in 1835, he completed a second expedition up the Platte River under Colonel Stephen W. Kearny (1794 -1848). He was subsequently stationed at Fort Gibson where he was promoted to First Lieutenant in 1863 and Captain in 1840. Steen distinguished himself during the Mexican American War, receiving serious wounds and earning an 1847brevet promotion to Major for personal gallantry. From 1849 to 1857 he was stationed in the territory of New Mexico, which had been acquired from Mexico in the Treaty of Guadeloupe-Hidalgo in 1848. There he established various forts and initiated diplomatic relations with various American Indian nations. In 1860, Steen was transferred to Oregon, where he was given command of Fort Walla Walla, but this position was terminated due to the outbreak of the American Civil War. Steen, a Union man despite his Kentucky roots, was promoted to Lieutenant Colonel and posted to Cantonment Holt near Washington D.C. He was then sent to Fort Craig in New Mexico. After the war, he was assigned to Benton Barracks in Missouri. Steen formally retired from service in September of 1863, but continued to perform active military duties and was assigned to the army fort at Sandy Hook, New Jersey. In 1866, he was sent to Colorado Territory to head up Fort Lyon. Eventually the U.S. Congress passed a law prohibiting retired officers from returning to active duty and Steen settled on a farm in Jackson County, Missouri. He remained there until his death. He is today interred at the mount St. Mary's Cemetery in Kansas City. Learn More...

Kingsbury, J. P. Journal of the Expedition of Dragoons, Under the Command of Colonel Henry P. Dodge, to the Rocky Mountains, During the Summer of 1835 (Washington: Government Printing Office) 1836.