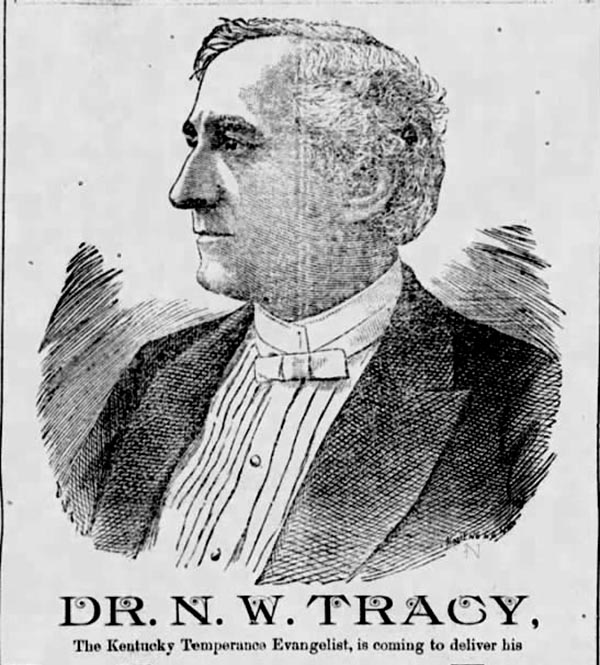 Nathan W. Tracy (September 26, 1841 - February 19, 1919) was an American religious evangelist and temperance speaker active in the late 19th century. Tracy was born in Cumberland, Maryland. He relocated to Ohio as a young man, where he found work as a fruit dealer. During the American Civil War (1861 - 1865) he served in Ohio, being discharged with an unspecified 'disability' in 1863. In 1871 he announced himself a doctor and began selling quack medicines under the brand 'California Vegetable Tincture and Blood Searcher'. By 1880 he had reinvented himself as the 'Kentucky Temperance Evangelist.' His earliest Temperance lectures date to about 1880 and continue to be advertised in newspapers until February of 1913. Despite the glow of virtue surrounding his life, deeper research suggests that Tracy was a man of questionable morals. An 1889 news article in the Lima Daily Times (Thursday Sept 26, 1889) describes how his two sons, Roy and Bob, 14 and 12, respectively, ran away from home, where they claim to have been regularly abused by their 'ferocious father' Tracy, and their stepmother, his second wife. He had a third son, in 1878, named Robin (1878 - 1943), and a daughter Faith Virginia Tracy (1897 - 1943). At the time, they were living in Bellefontaine, Ohio. More than once, he ran afoul of other Temperance and religious leaders, who publicly denounced him as fraud. Tracy traveled widely, but most of his work focused on Ohio, Kentucky, and Pennsylvania. Tracy died in Sandusky, Ohio at age 78.