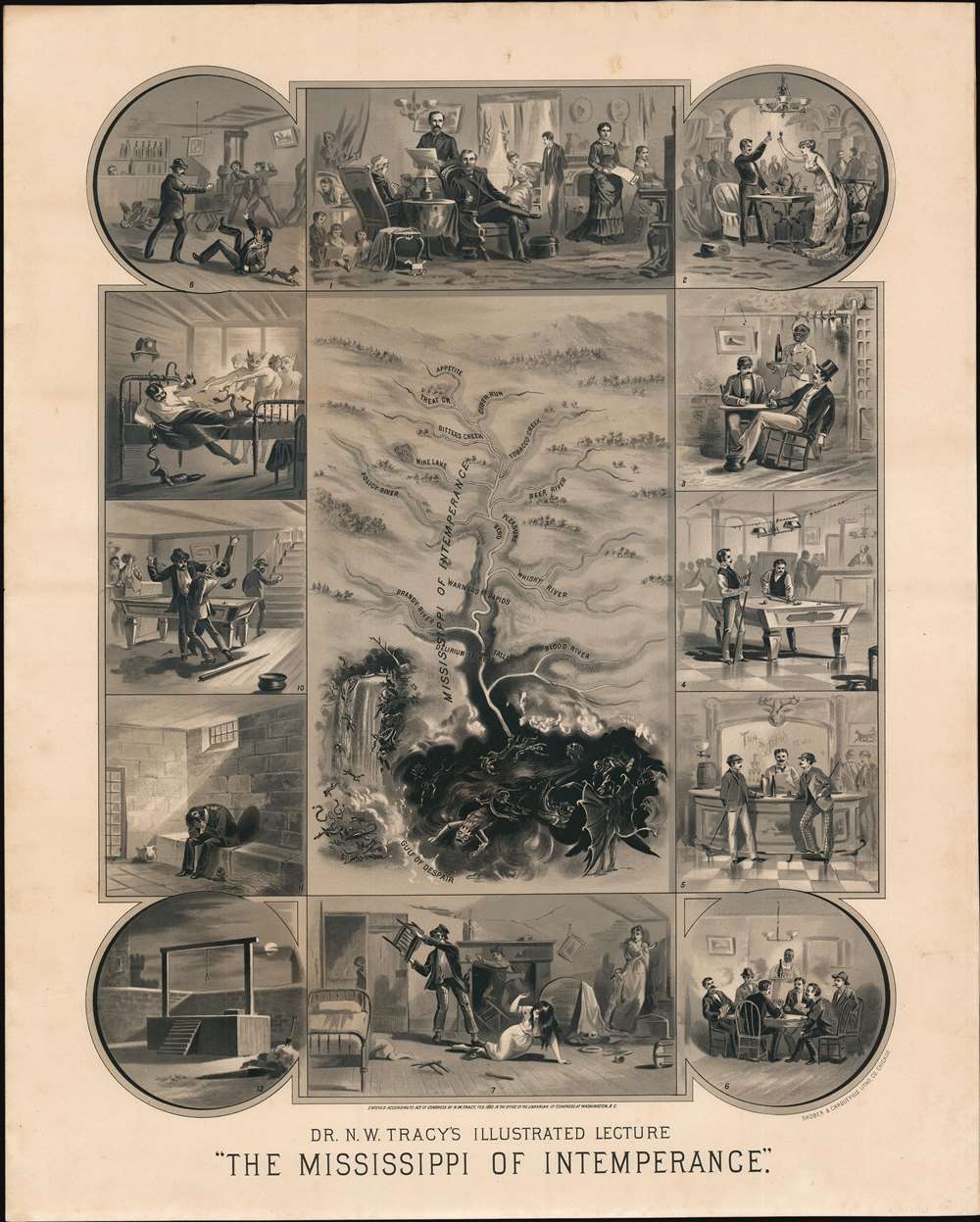 Rarest and most striking Temperance broadside.
$9,500.00

This is perhaps the most extraordinary and certainly one of the rarest temperance broadsides to emerge out of the 19th century. Designed by 'Dr.' Nathan W. Tracy, this allegorical broadside employs the metaphor of the Mississippi River to describe the progression and dangers of alcoholism.

Center to the image is a combination view and map representing the 'Mississippi of Intemperance' illustrated with a vignette of the dreaded Delirium Tremens Falls. Surrounding the main map are 12 framed vignette images detailing the decline of the drunkard. At top center, a large image reveals a happy sober man at home with his family - the Temperance ideal. Moving clockwise from this image, further illustrations depict happy toasting with a young lady, enjoying wine with a friend, playing pool at a saloon, enjoying a 'Tom and Jerry' (an early cocktail) at a bar, and a poker game. To our eye, the right side looks fun, but bottom center illustrates the turning point - an illustration that could have been taken from Tracy's own abusive life - where a drunken husband is beating his wife and children. From here, the progression is taken up at top left, where our drunkard hero gets involved in bar fights, experiences delirium tremens, commits murder in a pool hall, lands himself in prison, and ultimately meets his fate at the gallows.

Given that most of Tracy's temperance work focused in the northern Midwest (Ohio, Illinois, Indiana, Kentucky, etc), the use of the Mississippi River allegory would have been both apt and relatable. The allegorical Mississippi begins in the north, where various tributary rivers join the main river. At first, they appear reasonably benign: Appetite, Treat Creak, Cider Run. They become more extreme the farther south one travels where Wine Lake and Beer River lead to Pleasure Bend, a turning point in the path of alcoholism. From here, the river turns turbulent, with Whiskey River and Brandy River leading to the Warners Rapids - a point where, Tracy argued, friends and family could still intervene. Beyond the rapids are the dreaded Delirium Tremens Falls, the point of no return, dramatically illustrated at bottom left as surrounded by demons reminiscent of a H. Bosch painting. Ultimately, the Mississippi of Intemperance flows into the Gulf of Despair, where black waters and demons evoke hell. This imagery can also be seen in the light of the Civil War, during which Tracy fought for the Union and was disabled. Vice increases as one moves south towards New Orleans, which with its more permissive Creole and predominantly Catholic worldview, was anathema to the stiff and upright Tracy.

The Temperance Movement in the late 19th and early 20th century was a quasi-religious social advocacy against the consumption of alcoholic beverages. The movement can trace its origins to the late 18th century, when the industrial revolution required sober and trained workers to operate the increasingly important newly invented heavy equipment. By the 1850s, in the United States, Temperance was linked to the Gospel and the Great Awakening (a social religious revival). The Christianization of the Temperance Movement by organizations like the YMCA and the Women's Christian Temperance Union (both of which still exist) began to associate the consumption of alcohol with religious sin and moral decrepitude. Temperance activity was most pronounced in the northern states where, as an expression of moralism, it overlapped with the abolitionist and women's suffrage movements. After the American Civil War to the early 20th century, Temperance became a significant mass movement, supported by churches, traveling lecturers, various national and international organizations, and eventually political activism. In the United States, the Noble Experiment, Prohibition of all alcoholic beverages, began in 1920 and lasted through 1933, inaugurating the era of organized crime and underground speakeasy bars.

Tracy was an extremely active temperance lecturer from about 1880 to 1913, during which time he was known as the 'Kentucky Temperance Evangelist.' Apparently, Tracy's lectures, particularly his signature lecture, 'The Mississippi of Intemperance,' were popular audio-visual extravaganzas, drawing crowds of more than 2000 people. He used both a magniscope (primitive early motion picture projector) and a stereopticon (early slide projector) to present hundreds of images during a 2-hour temperance spectacle. Tracy's speaking circuit focused on Kentucky, Ohio, and Pennsylvania, but he ranged as far as Ottawa, Tennessee, and Kansas. Much of his lecture work was performed under the auspices of the Women's Christian Temperance Union.

This broadside was designed by Dr. N W. Tracy and published in 1882 by the Chicago firm of Shober and Carqueville. The poster may be a reduced version of a large canvas painting Tracy used in his early lectures, described by one source as measuring 9 x 15 feet. Tracy issued the poster for sale to his adherents and it was available for sale no later than August 1882. Tracy contracted the piece through a network of distributors. We found one advertisement for it 'Dr. Tracy’s lithographic pictures The Mississippi of Intemperance have arrived and subscribers can obtain them at A. D. Henderson’s shoe store. The price is one dollar, and parties desiring extra copies can procure them.' (Waukesha (Wisconsin) Daily Freeman, Aug. 18, 1882, p. 8). It has been speculated that the broadside did not attain wide circulation, leading to its extraordinary rarity today.

Exceedingly rare. We have identified examples at the Library of Congress and at the Billy Graham Center. No other surviving examples. Not in OCLC or Persuasive Maps: PJ Mode Collection. A once in a lifetime collecting opportunity.

Nathan W. Tracy (September 26, 1841 - February 19, 1919) was an American religious evangelist and temperance speaker active in the late 19th century. Tracy was born in Cumberland, Maryland. He relocated to Ohio as a young man, where he found work as a fruit dealer. During the American Civil War (1861 - 1865) he served in Ohio, being discharged with an unspecified 'disability' in 1863. In 1871 he announced himself a doctor and began selling quack medicines under the brand 'California Vegetable Tincture and Blood Searcher'. By 1880 he had reinvented himself as the 'Kentucky Temperance Evangelist.' His earliest Temperance lectures date to about 1880 and continue to be advertised in newspapers until February of 1913. Despite the glow of virtue surrounding his life, deeper research suggests that Tracy was a man of questionable morals. An 1889 news article in the Lima Daily Times (Thursday Sept 26, 1889) describes how his two sons, Roy and Bob, 14 and 12, respectively, ran away from home, where they claim to have been regularly abused by their 'ferocious father' Tracy, and their stepmother, his second wife. He had a third son, in 1878, named Robin (1878 - 1943), and a daughter Faith Virginia Tracy (1897 - 1943). At the time, they were living in Bellefontaine, Ohio. More than once, he ran afoul of other Temperance and religious leaders, who publicly denounced him as fraud. Tracy traveled widely, but most of his work focused on Ohio, Kentucky, and Pennsylvania. Tracy died in Sandusky, Ohio at age 78. Learn More...