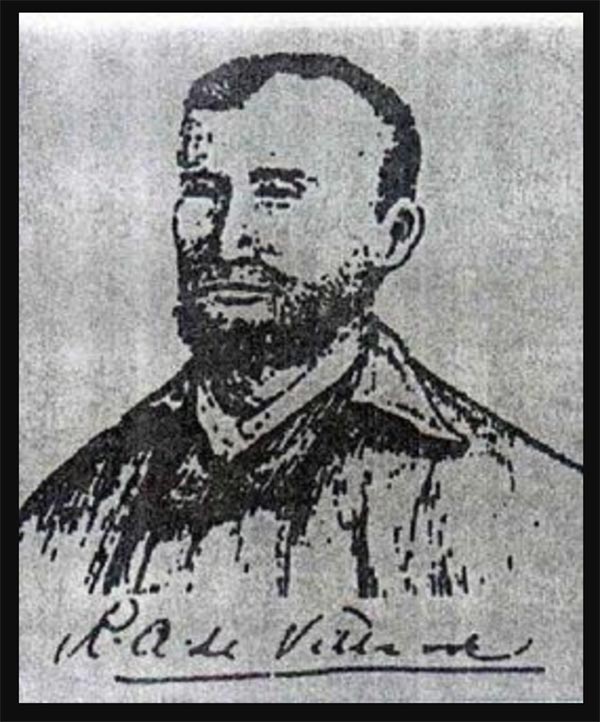 Robert Alexis de Villard (費拉爾; 1860 - c. 1920), commonly R. A., was a painter, artist, and customs official who spent most of his life in the foreign concessions of Shanghai. All evidence suggest that Villard was born in Strasbourg, Alsace-Lorraine. He is noted in customs documents as a 'German' but seems to identify as 'French' - understandable given that this was formerly French territory. Villard spent his formative years in Paris, where he studied painting. He was later closely aligned to British interests and may have served as a foreign national in the British extraterritorial government. Customs records can definitively place Villard in Shanghai as early as 1885, where it took the Chinese name 'Fei Laer' (費拉爾). He likely followed family members to Shanghai, as there is some evidence that a relative owned a grocery in the French Concession. By 1888 Villard was married, as his wife, one 'Madame R. A. de Villard', is noted as residing at 13 Xihuade Road (Changzhi Road). In 1889, he was associated with the 'Crown Advocate Office' and later independently with the firm of 'Villard et Girault'. He entered the Shanghai Customs Register Office in September of 1892. It was during his tenure at this office, the high-point of his career in Shanghai, that Villard created his only map, the unique Shooting Districts Lying Between Shanghai and Wuhu. Around this time, he was fatefully commissioned to design multiple customs and postal stamps - a misbegotten effort plagued by cultural and logistic issues. Villard's first designs were rejected because he had abbreviated 'Imperial Chinese Post' as 'Imp. Chin. Post', which was considered an insult. His second set of designs called for the stamps to be purple. Unfortunately, purple was reserved for the imperial household, and the stamp design caused an uproar. He made a third set of designs, which were ultimately accepted. Through his design efforts Villard became enamored of philately and befriended fellow philatelist Charles Whitfield King of Ipswich, with whom he had extensive correspondence. Nonetheless, confusions in printing of the stamps, their distribution, and sales, led to extensive fraudulent postage being circulated, for which Villard took the heat. On July 23, 1897, he was arrested and dismissed from his position for 'abuse of power.' He remained in Shanghai, taking work with Arnhold, Karberg and Company, a trading concern. From 1903, he disappears from the Shanghai records, but his correspondence with Whitfield King hints that he was being sent to Tibet. Although we have not been able to verify this, it is likely that Villard accompanied the Younghusband invasion of Tibet (1903 - 1904) - perhaps 'getting out of dodge' after the post-stamp incident. Villard suspected that he would not return from the expedition and wrote as much to Whitfield King. This is also where traditional philately scholarship ends his story, presuming him dead. Further research shows this not to be the case. Villard is again listed as a resident of Shanghai in 1905 directories, this time working with the China Life Mutual Insurance Company. He does not fully disappear from Shanghai records until 1909. In 1910, he reappears in Strasbourg, Alsace-Lorraine, then part of Germany, where he is elected a member of the local Stamp Association. It is not clear when he died, but it is likely in the 1920s. His wife died in Shanghai on August 12, 1942, at 77 years old. An image of Villard held by his descendant G. D. Raeburn, was released in the 1940s. The Chinese stamps he created are considered 'holy grail' collectors' pieces for philatelists, some selling for millions of dollars.