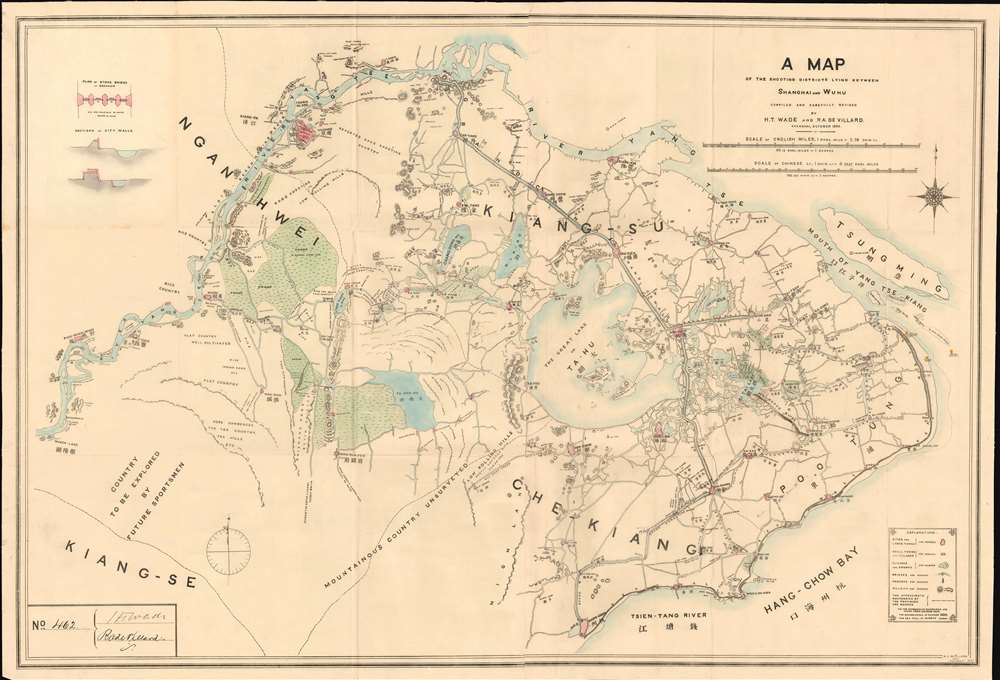 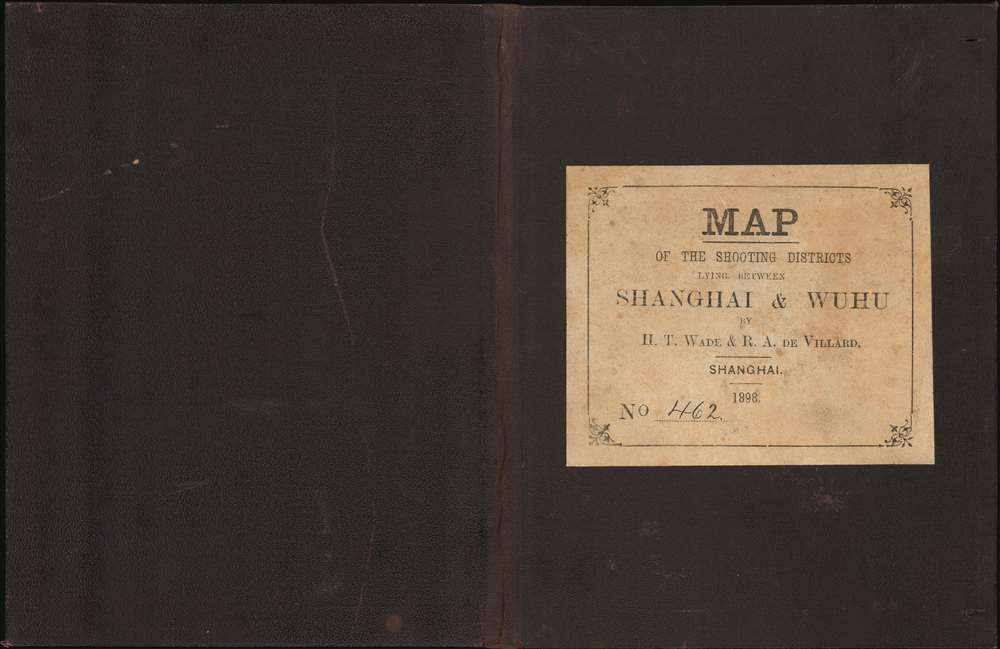 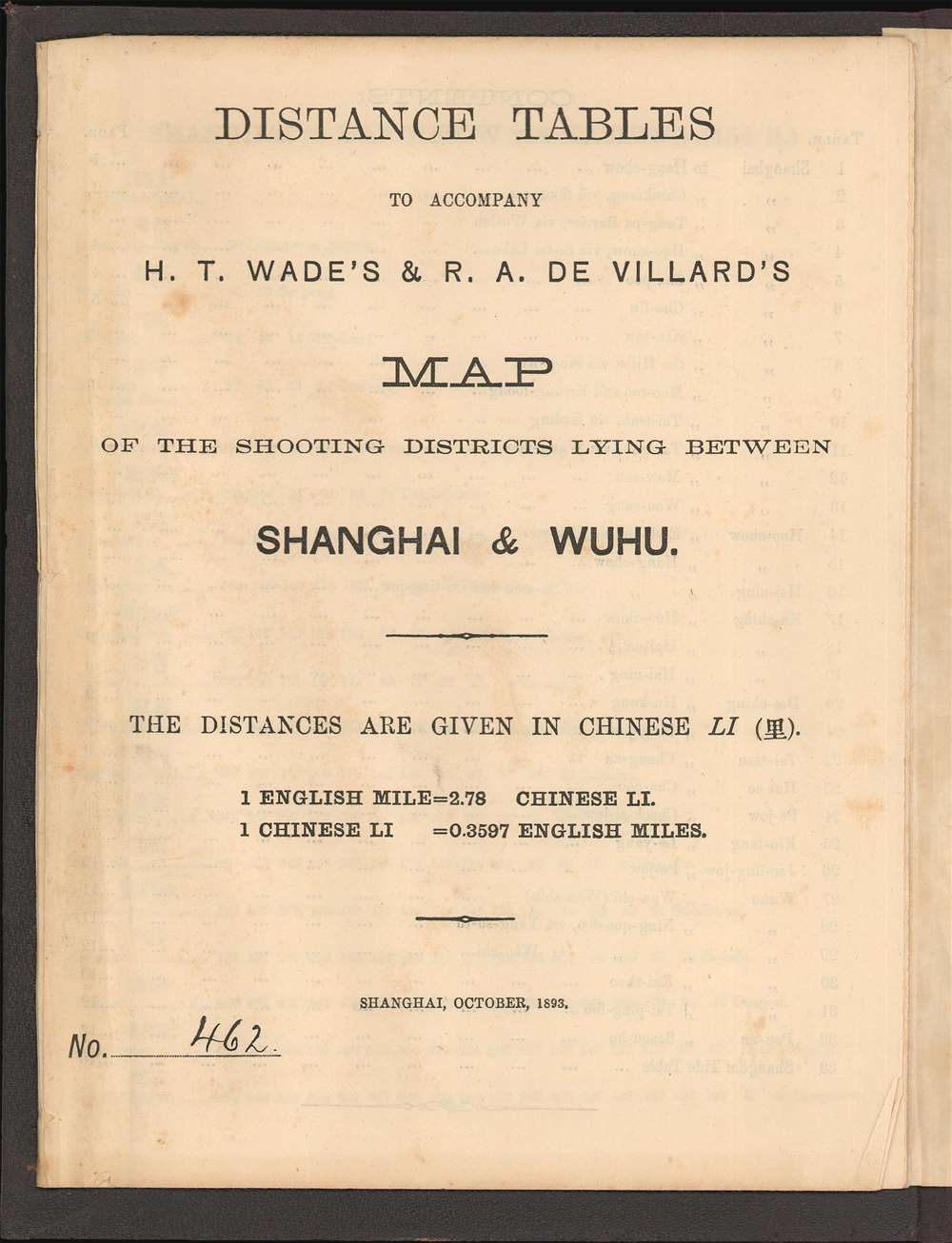 This is Robert Alexis de Villard and Henling Thomas Wade's important 1893 hunting map of Shanghai and its environs. The map was created by de Villard in partnership the renowned sportsman Henling Thomas Wade, for use by expatriate hunting clubs in Shanghai. The map's coverage is expansive, bounded on the north and west by the main course of the Yangtze River, and on the east by Hangchow Bay. It includes from Nanjing (Nanking) and Zhenjiang (Chin-Kiang) to Hangzhou. Most locations are identified in English with Romanized Chinese. Some larger cities and towns, such as Nanjing (Nanking), Zhenjiang (Chin-Kiang), and Hangzhou (Hang-Chow), are also noted in Chinese.

The British carried their love of hunting to all reaches of the far-flung colonial empire. China was no exception. The country around Shanghai initially seemed to offer little game as the British understood it - particularly no foxes. In 1863, this led Henling Thomas Wade and other British colonials to establish the Shanghai Paper Hunt Club. Mounted on Mongolian ponies, the Paper Hunt Club conducted 'steeplechases' wherein they tracked a member who ranged ahead leaving a 'paper' trail. The region was not, however, bereft of game. The complex river channels, swampy terrain, and rolling hills were ideal for a wide variety of gamebirds. Wade took it upon himself to build hunting as a hobby in the region, documenting indigenous waterfowl, noting the best types of dogs, and recommending guns types. In 1893, Wade partnered with Villard to publish this map and followed up in 1895 with the popular hunt guide, With Boat and Gun in the Yangtze Valley.

While the map may initially appear to lack specificity, it is actually expansive and exacting in its coverage, being the result of first-hand surveys in the region. While Europeans were highly active in the Yangtze Valley, they completed little true reconnaissance, relying instead on Chinese guides, outdated indigenous cartography, and the highly navigable river system. Hunters, on the other hand, needed to range inland and leave behind the well-traveled waterways in search of more remote game-rich territory. The Villard/Wade map thus offers the huntsman a practical guide to traversing and shooting in the region, noting terrain, the presence of game, cultivated and uncultivated lands, hills and flat country ideal for horsemanship, shooting, and more.

This map was created and published by Henling Thomas Wade and Robert Alexis de Villard in 1893. In the lower right corner, there is a box wherein the individual maps are numbered and signed by Villard and Wade. In most exampels this box is filled in, with the highest we have seen being 470 and the present example being 462. This both suggests a likely print run of 500, and underscores the degree to which these maps were personally handed out to friends and family in the close-knit Shanghai expatriate community. Most examples are also dated on the cover, 1898, which suggests that they were bound and distributed 5 years after their printing. Five examples are cataloged in OCLC and are part of the institutional collections at Trinity College, Cornell University, the Marburg University library in Marberg, Germany, the Sächsische Landesbibliothek-Staats-und Universitätsbibliothek in Dresden, and the British Library.

Robert Alexis de Villard (費拉爾; 1860 - c. 1920), commonly R. A., was a painter, artist, and customs official who spent most of his life in the foreign concessions of Shanghai. All evidence suggest that Villard was born in Strasbourg, Alsace-Lorraine. He is noted in customs documents as a 'German' but seems to identify as 'French' - understandable given that this was formerly French territory. Villard spent his formative years in Paris, where he studied painting. He was later closely aligned to British interests and may have served as a foreign national in the British extraterritorial government. Customs records can definitively place Villard in Shanghai as early as 1885, where it took the Chinese name 'Fei Laer' (費拉爾). He likely followed family members to Shanghai, as there is some evidence that a relative owned a grocery in the French Concession. By 1888 Villard was married, as his wife, one 'Madame R. A. de Villard', is noted as residing at 13 Xihuade Road (Changzhi Road). In 1889, he was associated with the 'Crown Advocate Office' and later independently with the firm of 'Villard et Girault'. He entered the Shanghai Customs Register Office in September of 1892. It was during his tenure at this office, the high-point of his career in Shanghai, that Villard created his only map, the unique Shooting Districts Lying Between Shanghai and Wuhu. Around this time, he was fatefully commissioned to design multiple customs and postal stamps - a misbegotten effort plagued by cultural and logistic issues. Villard's first designs were rejected because he had abbreviated 'Imperial Chinese Post' as 'Imp. Chin. Post', which was considered an insult. His second set of designs called for the stamps to be purple. Unfortunately, purple was reserved for the imperial household, and the stamp design caused an uproar. He made a third set of designs, which were ultimately accepted. Through his design efforts Villard became enamored of philately and befriended fellow philatelist Charles Whitfield King of Ipswich, with whom he had extensive correspondence. Nonetheless, confusions in printing of the stamps, their distribution, and sales, led to extensive fraudulent postage being circulated, for which Villard took the heat. On July 23, 1897, he was arrested and dismissed from his position for 'abuse of power.' He remained in Shanghai, taking work with Arnhold, Karberg and Company, a trading concern. From 1903, he disappears from the Shanghai records, but his correspondence with Whitfield King hints that he was being sent to Tibet. Although we have not been able to verify this, it is likely that Villard accompanied the Younghusband invasion of Tibet (1903 - 1904) - perhaps 'getting out of dodge' after the post-stamp incident. Villard suspected that he would not return from the expedition and wrote as much to Whitfield King. This is also where traditional philately scholarship ends his story, presuming him dead. Further research shows this not to be the case. Villard is again listed as a resident of Shanghai in 1905 directories, this time working with the China Life Mutual Insurance Company. He does not fully disappear from Shanghai records until 1909. In 1910, he reappears in Strasbourg, Alsace-Lorraine, then part of Germany, where he is elected a member of the local Stamp Association. It is not clear when he died, but it is likely in the 1920s. His wife died in Shanghai on August 12, 1942, at 77 years old. An image of Villard held by his descendant G. D. Raeburn, was released in the 1940s. The Chinese stamps he created are considered 'holy grail' collectors' pieces for philatelists, some selling for millions of dollars. Learn More...


Henling Thomas Wade (1846 - September 17, 1915) was a British subject living in Shanghai, where he was born. He was a recognized authority on the tea trade of China as well as hunting in the vicinity of Shanghai. He was educated in London, at Leatherhead and at King's College. He returned to Shanghai in around 1862. Wade was an avid sportsman. He ran the 'memorable mile race' in Shanghai in 1868 and also represented Shanghai in an inter-port cricket match that same year. He served as captain for the English team against a Scottish eleven in 1888. Also around 1888 he became the secretary of the Shanghai Cricket Club. He was an early member of the Shanghai Paper Hunt Club and was well known for writing With Boat and Gun in the Yangtze Valley, a hunting guide for those visiting Shanghai. He was also a prominent member of the Shanghai Debating Society. He is known for a single map, Shooting Districts Lying Between Shanghai and Wuhu, which he published with Robert Alexis de Villard (費拉爾; 1860 - c. 1920). In September of 1915, Wade died of stomach cancer at his 12 Park Lane. Learn More...